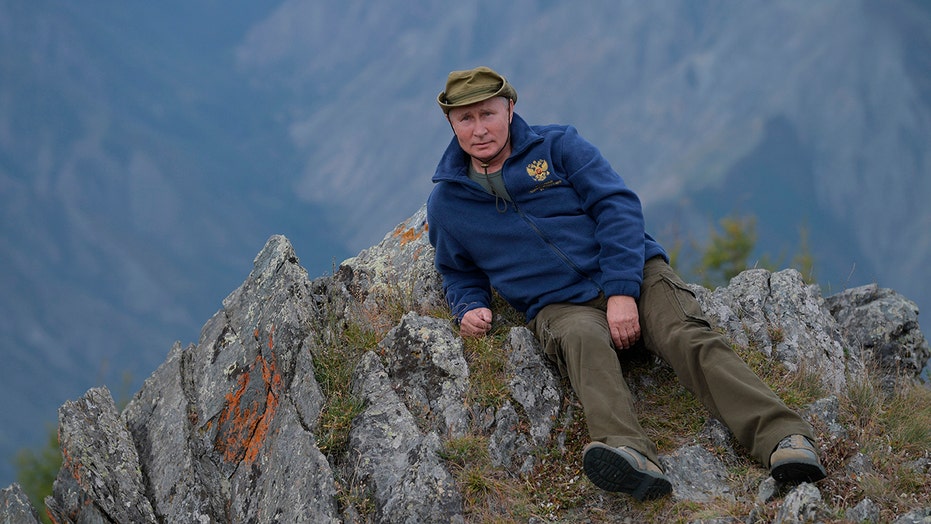 Russian President Vladimir Putin took a break from his role as global bogeyman to spend the weekend before his 67th birthday engaging in one of his favorite pastimes: posing for macho photo ops in the great outdoors.

After a week in which Putin joked about meddling in the upcoming 2020 presidential election and mentioned that Moscow had plans to help China build a missile warning system, the Russian president also found time to retire to the forested mountains of southern Siberia, in the Tuva region that border Mongolia.

Putin, who turned 67 on Monday, was captured in photos released by the Kremlin walking up the sloping mountains with a large walking stick. In several photos, Putin admires the view – sometimes while wearing a pair of sleek, dark sunglasses – of the surrounding mountains.

Putin rests on a hill in Siberia during a break from state affairs ahead of his birthday. (Alexei Druzhinin, Sputnik, Kremlin Pool Photo via AP)

Russian television also broadcast some of Putin’s trip, showing the adventure-loving leader hiking to a cliff and then pausing to take in the view of the Yenisei River below.

Putin poses with his walking stick on a hill in the Siberian mountains. (Alexei Druzhinin, Sputnik, Kremlin Pool Photo via AP)

Putin has a fondness for the area, having taken trips several times over the past few years to hike up the mountains and go fishing and swimming in the pristine rivers and lakes.

Putin has visited the area several times over the past few years to hike, fish and swim. (Alexei Druzhinin, Sputnik, Kremlin Pool Photo via AP)

The trip is only Putin’s most recent indulgence in machismo self-promotion, having in the past released photos and videos showing off his martial arts skills with a Russian judo team, working out with weights — and, of course, his many documented shirtless exploits.