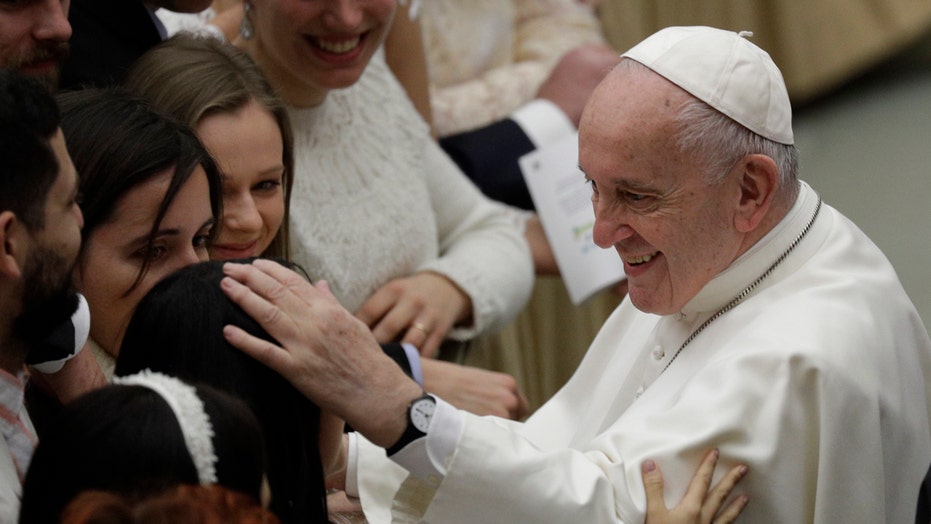 Pope apologizes for smacking hand of woman who grabbed him

Pope Francis issues an apology during his New Year's Day homily for slapping away the hand of a woman who grabbed him while he was greeting crowds on New Year's Eve.

Pope Francis agreed to a nun’s request for a kiss on the cheek a week after a video of him swatting away the hand of a woman on New Year’s Day went viral. He had just one request: "Don't bite!"

On Wednesday, Francis cautiously approached the crowds behind the barricades as he entered the Vatican auditorium at the start of his weekly general audience.

POPE FRANCIS ASKS EVERYONE TO PRAY FOR AUSTRALIA AMID DEVASTATING FIRES

While he normally would greet well-wishers, he appeared to keep his distance, until the nun made her request.

Pope Francis salutes the faithful at the end of his weekly general audience at the Vatican, Wednesday, Jan. 8, 2020. (AP Photo/Gregorio Borgia)

After she agreed, Francis bent in to give her a peck on the cheek. The woman did a joyful dance as well-wishers in line cheered.

The contrast could not have been greater to the moment days earlier, when the pope was visibly upset after a pilgrim aggressively grabbed his hand and pulled him in, after which he slapped her away.

In his address the following day, the pontiff apologized.

"So many times we lose patience. Me, too,” he said in his impromptu remarks. “I say ‘excuse me’ for the bad example.”

Some complained Francis has a short temper but others noted the 83-year-old pope, who suffers from sciatica and walks with difficulty, could easily have been toppled over by the aggressive grab.

The Vatican later said the pope was worried about spreading germs but many of his critics said he was disrespecting tradition.

Fox News' Lucia Suarez Sang and the Associated Press contributed to this report.