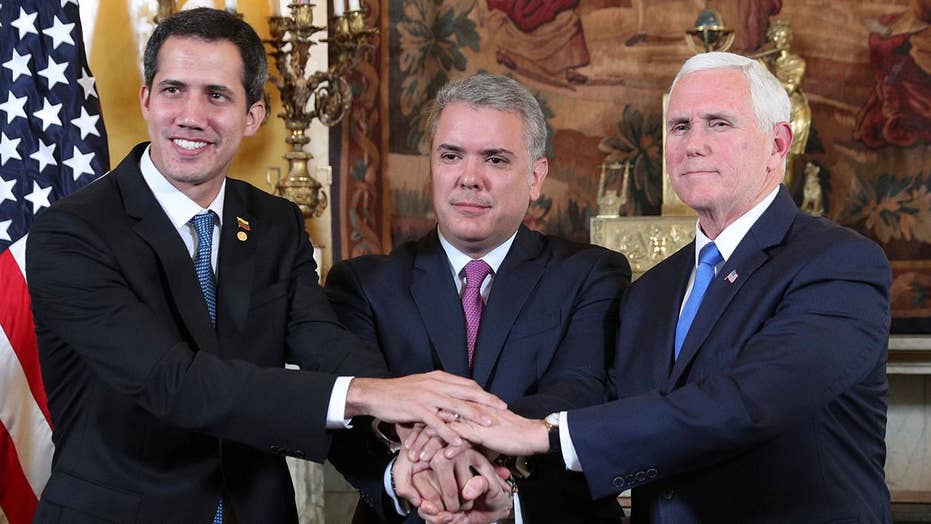 Speaking in Colombia on Monday, Pence repeated President Trump’s threat that “all options are on the table” to push out embattled socialist leader Nicolas Maduro, whose re-election is considered invalid by the U.S. and dozens of other countries.

"It's time to do more," said Pence. "The day is coming soon when Venezuela's long nightmare will end, when Venezuela will once more be free, when her people will see a new birth of freedom, in a nation reborn to libertad."

Pence was speaking at a meeting with the regional leaders in the Lima Group — a 14-nation coalition of mostly conservative Latin American nations and Canada that has joined together to pressure Maduro.

“We are with you 100 percent,” Pence said ahead of the start of the meeting. “I was to assure you, President Guaido, the tragic events of this past weekend have only steeled the resolve of the United States to stand with you … We will keep standing until your libertad is restored.”

Venezuela opposition leader Juan Guaido, who last month declared himself interim head of state and triggered a power struggle in the South American country, was also in attendance. He asked for a moment of silence for those killed in what he called the “massacre” of the weekend and urged the bloc to consider “all options” in ousting Maduro.

POMPEO URGES VENEZUELAN SECURITY FORCES TO LET HUMANITARIAN AID INTO THE COUNTRY: 'DO THE RIGHT THING'

“The United States will not stand idly while the people of Venezuela are denied basic necessities and made to suffer needlessly. These actions have consequences,” the department said in a statement. “We reaffirm our call on Venezuelan officials and security forces to allow urgently needed food and medicine to enter and be distributed throughout the country.”

Violent clashes broke out over the weekend across the Colombia-Venezuela border – at least four protesters died while more than 300 were injured as U.S.-backed aid convoys attempted to enter Venezuela to deliver food and medicine.

Trucks were met with tear gas and rubber bullets and at least two went up in flames, which the opposition blamed on security forces and the Venezuelan government on “drugged-up protesters.” 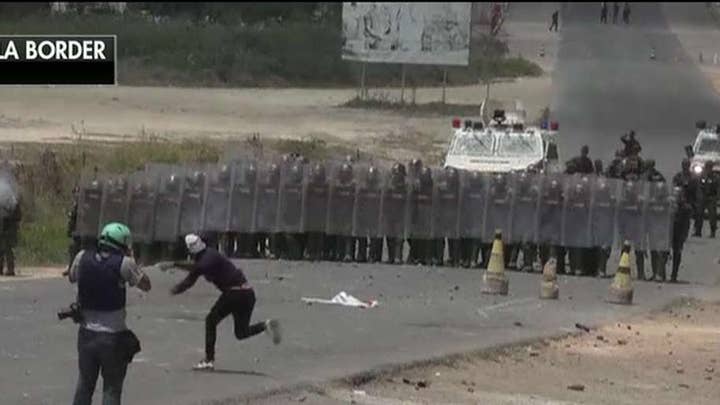 For weeks, the U.S. and regional allies had been amassing emergency food and medical kits on Venezuela's borders in anticipation of carrying out a "humanitarian avalanche" by land and sea to undermine Maduro's rule.

The embattled Maduro has denied a humanitarian crisis in Venezuela and claimed that aid efforts are part of a U.S.-orchestrated coup attempt against the OPEC member.

Pence announced Monday that the U.S. would be sending another $56 million to neighbors of Venezuela to help them cope with migrants fleeing the nation’s deepening crisis. 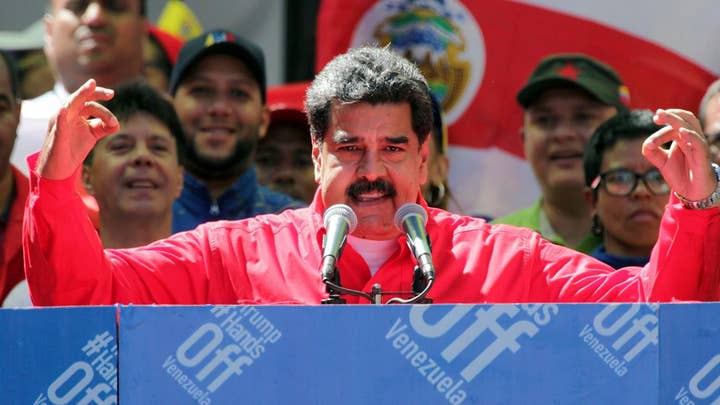 The U.S. has already provided more than $139 million in aid to help Venezuela, Pence announced.

At the United Nations, the U.S. has asked the UN Security Council to meet to discuss the crisis in Venezuela, pushing the 15-member block to formally call for free, fair and credible presidential elections in Venezuela with international observers. This move prompted Russia – one of Maduro’s biggest supporters – to propose a rival draft resolution, Reuters reported.