Firefighters hold a press conference on their efforts to fight the fire. Greg Palkot reports on what was said.

Prosecutors investigating the cause of the devastating blaze which destroyed large portions of Notre-Dame Cathedral said there is no evidence thus far to suggest the fire was a criminal act.

Instead, the Paris prosecutor’s office said in a statement Wednesday several hypotheses into the cause of the April 15 blaze include a malfunctioning electrical system or a smoldering cigarette.

The office said while they are still investigating the possibility of negligence, they currently have no reason to believe the fire was started deliberately.

“If certain failings, which may explain the scale of the fire, have been brought to light, the investigations carried out to this date have not yet been able to determine the cause of the fire,” Paris prosecutor Remy Heitz said in the statement. “For now, there are no indications of a criminal origin." 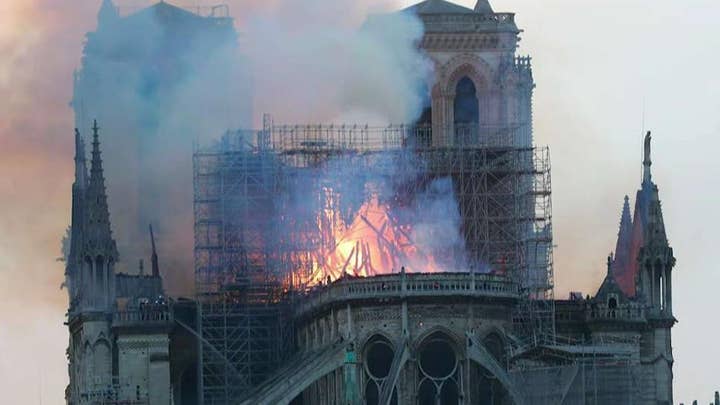 The massive blaze ripped through the medieval cathedral on April 15, destroying the spire which toppled into the flames. It has left the crippled monument, once a major tourist attraction, barricaded to the public, and the skyline of Paris noticeably altered.

French President Emmanuel Macron set a target of five years – which will be when France is set to host the 2024 Summer Olympics – for the completion of Notre-Dame restoration efforts.

Earlier this month, church and business officials said mainly American citizens, via the charitable foundation Friends of Notre Dame, have footed the bills and paid the salaries of the 150-some-odd workers employed by the cathedral since the fire. This month, it is handing over the first-ever payment of $4 million for the cathedral’s reconstruction. Early cost estimates of the needed repairs come in around $1.13 billion to $2.3 billion. For context, it used to cost around $4.5 million every year for basic renovations to the cathedral before the fire.

Rubble and the cross inside the Notre Dame de Paris Cathedral, Wednesday May 15, 2019 in Paris. French Culture Minister Franck Riester says that one month after a fire engulfed Notre Dame Cathedral, the edifice is still being made safe enough for restoration to begin. (Philippe Lopez/Pool via AP)

On Wednesday, the Notre-Dame Foundation announced that major French donors, Bernard Arnault, his family and luxury giant LVMH Group have made an initial payment of 10 million euros on a pledge of 200 million as have Francois and Francois-Henri Pinault who pledged 100 million. No funds had previously been forthcoming.

Almost $1 billion was promised by some of France's richest and most powerful families and companies, some of whom sought to outbid each other in the hours and days after the inferno. It prompted criticism that the donations were as much about the vanity of the donors wishing to be immortalized in the edifice's fabled stones than the actual preservation of church heritage.