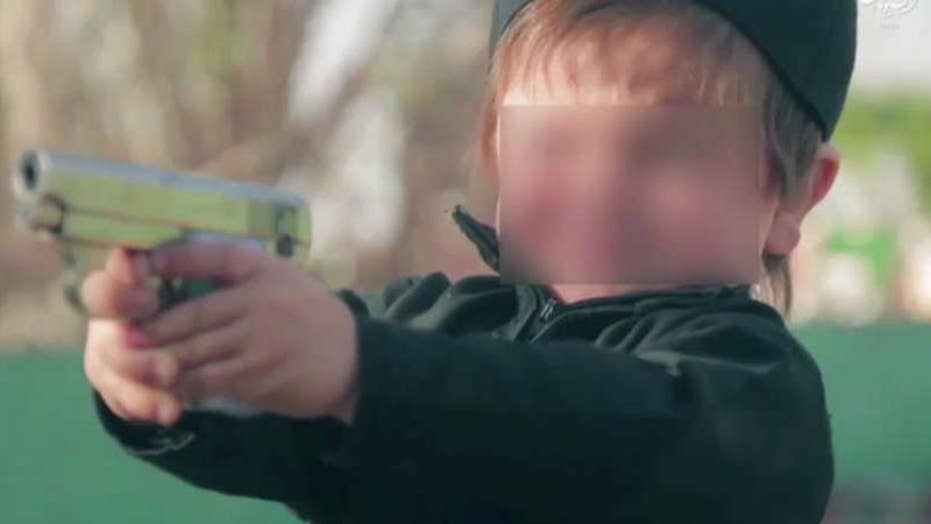 Shocking footage of ISIS’ child recruits beheading and shooting three men has been released by the terror group.

The young children, some appearing to be toddlers and some around 10 years old, are filmed wearing camouflage army-style uniforms while brutally killing their victims in Deir ez-Zor, Syria.

One extremely young boy is filmed shakily clutching a gun and shooting a man in the head, as another brandishes a large knife before savagely cutting a man’s throat.

As part of the video the youngsters are also seen in rifle training and waving the group's distinctive flag.

OPINION: OUR CURRENT WAVE OF TERROR ATTACKS WAS PREDICTED BY 9/11 MASTERMIND KHALID SHEIKH MOHAMMED YEARS AGO

A victim, thought to be from the Kurdish group PKK, speaks to the camera before he is killed in an abandoned amusement park by one of the children.

In the disturbing scenes a young boy climbs into an old part of a carnival ride where a man is being held and stares angrily at him, while clutching a large blade.

Later a toddler walks over broken and dusty balls in an old ball pit and is handed a gun.

He shoots a man in the head while screwing up his eyes and looking away from the weapon clutched in his hands.

The video was released by ISIS with an Arabic title which roughly translates to "Occasional in His Own Blood".

The PKK, or Kurdistan Worker' Party, is a left-wing organization based in Turkey and Iraq.

Members began to fight against Syrian ISIS forces in mid-July 2014.

Last month a film of brainwashed children carrying out executions and taking part in training was released as part of ISIS propaganda.

Children appearing as young as ten are shown murdering captives and raiding buildings with live ammunition.

In one scene they are even filmed chasing a man to the edge of a building before he is forced to jump to his death.

Dubbed the Cubs of the Caliphate, ISIS' army of preteen terrorists have appeared in several recent videos slaughtering enemy prisoners.

The film showed uniformed terror tots in the Islamic State's so-called capital of Raqqah in Syria.