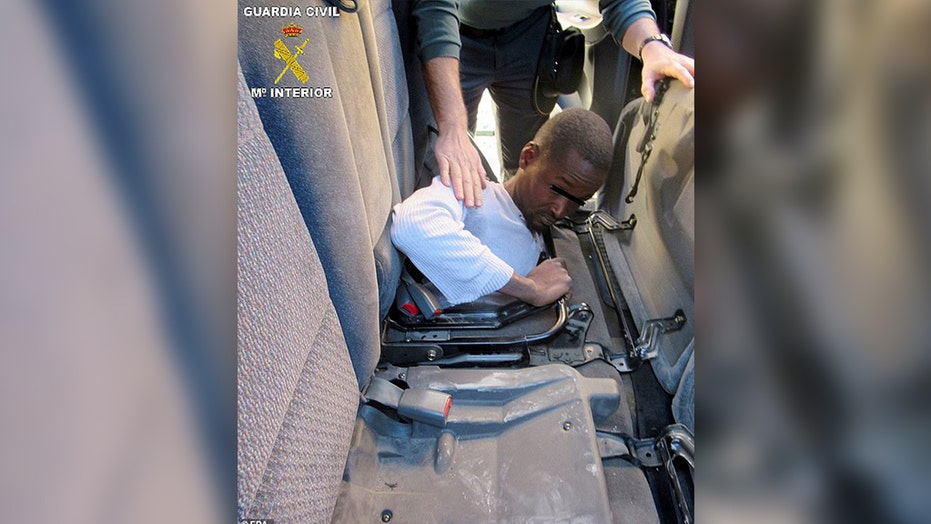 Two teenage migrants from Africa were found by Spanish authorities crammed inside the dashboard and under the back seat of a Hyundai station wagon attempting to cross from Morocco.

The Spanish civil guard said it foiled the smuggling scheme Thursday when it stopped the vehicle at the Beni-Enzar crossing in the Spanish enclave of Melilla in northern Africa.

One of the migrants, a 19-year-old, was found hiding under the rear car seats. (Spanish Civil Guard)

In a press released obtained by Fox News, authorities said a routine security check alerted officials of physical abnormalities in the vehicle.

A 17-year-old migrant was found hiding in the glove compartment of a Hyundai station wagon. (Spain Civil Guard)

Authorities used a “heartbeat detection machine” to scan for any heartbeats inside the vehicle, the press release said.

Police were forced to cut parts of the vehicle due to how tightly the migrants were crammed inside.

The ripped out remains of the glove compartment where one of the migrants was found. (Spanish Civil Guard)

The two teenagers were determined to be from the Sub-Saharan African nation of Guinea.

The pair were found to have symptoms of sweating, numbness, and difficulty walking due to the exposure of toxic gasses expelled from the car and the smallness in space in which they were rescued.

Authorities determined their conditions were stable after administering first aid and neither had to be transferred for additional medical care.

The hand of the 17-year-old migrant who was found hiding in the glove compartment of a Hyundai station wagon. (Spanish Civil Guard)

The driver, a 30-year-old Moroccan, was arrested on suspicion of human trafficking.

Spanish police reported the migrants were transferred to detention centers within Melilla.