The murders of at least four people in as many days have triggered a massive investigation by London police and an increase of patrols across the British capital in a bid to stem the eruption of violence.

Scotland Yard said Sunday that, while police have made a “significant number of arrests,” officers are following up on additional “investigative leads to ensure that we achieve justice for the families of those affected by violence in the last few days.”

“We have been using a number of operational tactics in targeted locations to prevent further violence and to provide reassurance to the communities in those areas,” he said.

But even amid Scotland Yard’s increased patrols, a 42-year-old man was stabbed to death early Monday in east London.

Later, a 28-year-old man was shot in the city, but he was hospitalized with injuries police said were non-life threatening.

Twist's update comes as London police race to investigate a spate of deaths since Friday, when, in separate incidents, an 18-year-old man was fatally stabbed and 19-year-old Eniola Aliko was shot dead.

Eniola Aluko, 19, was shot dead in London during a violent weekend that saw at least four dead. (Met Police)

Aluko died of a gunshot wound to the neck and chest, a post-mortem examination showed. Five people were arrested in connection with his death.

Two people -- a 17-year-old man and 18-year-old Mohammed Nadir Dafallah -- have been charged with murder in the other killing and were due in court Monday.

There have been no arrests yet in the Saturday death of a man in his 30s, who was fatally stabbed in Tower Hamlets. 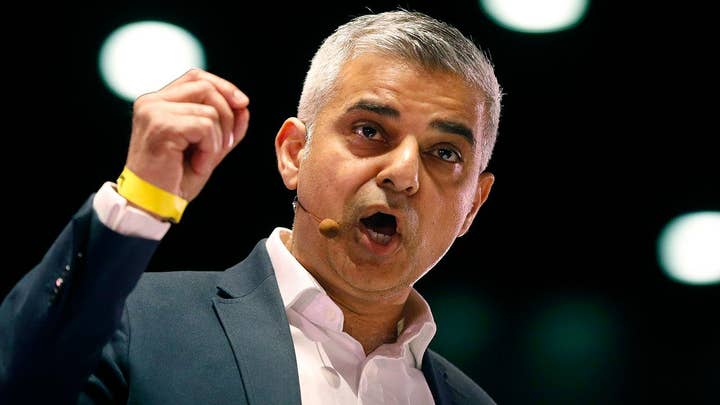 London Mayor Sadiq Khan tweeted his praise for the work being done by the Metropolitan Police.

“Officers are working tirelessly in their efforts to keep our streets safe,” he wrote.

The rise in violence appeared to also catch the attention of President Trump, who on Saturday described Khan as a “disaster” while retweeting images of news articles about the violence in London.

“LONDON needs a new mayor ASAP. Khan is a disaster – will only get worse!”

He later added: “He is a national disgrace who is destroying the City of London!”

The two men engaged in a war of words ahead of and during Trump’s recent visit to the United Kingdom.

On Monday, a spokesperson for Khan told Sky News the mayor would not “waste his time responding to this sort of tweet” as he was “focusing on supporting London’s communities and over-stretched emergency services.”

Knife crime, in particular, rose to record levels in England and Wales in 2017-18. This year, there has been one fatal stabbing every 1.45 days, the BBC reported last month.