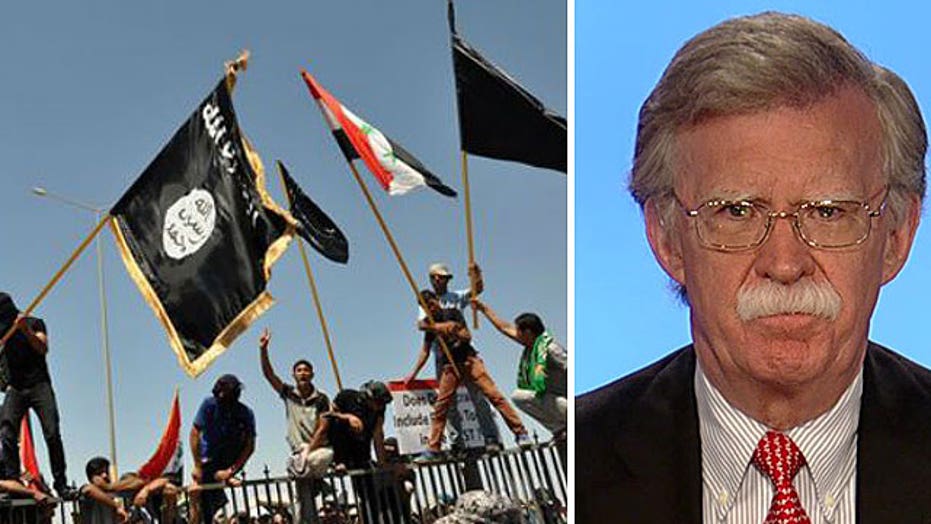 Bolton: Obama 'still doesn't have a strategy' on ISIS

Former U.S. ambassador to the U.N. says White House should have focused on threat sooner

Islamic State militants are reportedly demanding $6.6 million and the release of a U.S. prisoner before they will free a third American hostage held by the group, an unidentified aid worker.

A source confirmed to Fox News that the aid worker is a 26-year-old woman from the West Coast. They did not provide further details, but ABC News reported that the woman, whose relatives have requested she not be identified, is the third of at least four Americans known to be held by the extremist Muslim organization. American journalist James Foley was executed by the group in a video that circulated online last week. Steven Sotloff, formerly of Miami, Florida, was also seen alive in the same footage and purportedly remains in Islamic State custody.

The terror organization also has demanded that U.S. authorities release Aafia Siddiqui, a Pakistani neuroscientist who was convicted in 2010 of trying to kill U.S. officials two years earlier. Siddiqui, 42, who reportedly married a nephew of Al Qaeda mastermind Khalid Sheikh Mohammed in 2003, was later sentenced to 86 years in prison. The Karachi native, who was educated in the United States and earned degrees from M.I.T. and Brandeis University, remains in federal custody in Texas.

Siddiqui’s relatives, meanwhile, sought to distance themselves from the militants, saying they were “very distraught” to be linked in any way with Islamic State, ABC News reports.

“If the issue is true, we would like to state that our family does not have any connections to such groups or actions,” according to a letter written by Siddiqui’s relatives. “We believe in a struggle that is peaceful and dignified. Associating Aafia’s name with acts of violence is against everything we are struggling for.”

Siddiqui’s relatives, according to the letter, said they cannot agree with a “by any means necessary” approach to her freedom.

A U.S. State Department spokesman declined comment on the matter when reached by FoxNews.com early Tuesday.

Mauri Saalakhan, of The Peace and Justice Foundation, said Siddiqui's relatives are "opposed" to any connection to the militants during a press conference Monday.

“In their letter to ISIS they made it very clear, this is not the way, these are not the conditions under which we want our loved ones released," he told ABC News. "Nor did they want harm to come to anyone else’s loved one in the name of Aafia … They conveyed that message loud and clear.”