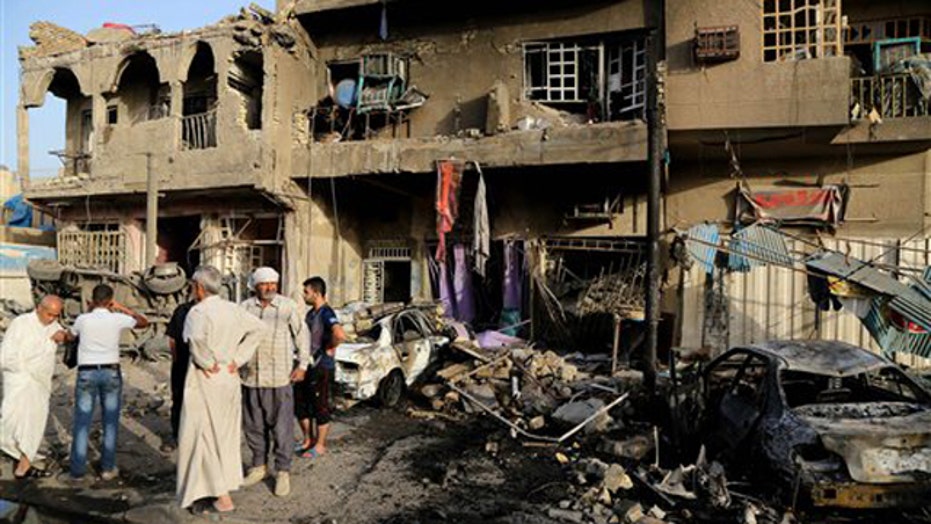 Waves of U.S.-led air strikes against Islamic State fighters appear to have done little to stem the terrorist army’s advance in Syria, and now the militants are close to overrunning key positions on the outskirts of Baghdad.

With the world’s eyes on the terrorist army’s siege of the Syrian border city of Kobani, where U.S.-led airstrikes are backing Kurdish fighters, some 500 miles southeast, Islamic State fighters are within eight miles of the Iraqi metropolis. The Islamic militants have reportedly infiltrated the Baghdad suburb of Abu Ghraib, not far from the runway perimeter of Baghdad's international airport. The suburb is perhaps best known to the west as the site of an infamous prison operated by the U.S. military during the Iraq war.

“Daash is openly operating inside Abu Ghraib,” an Iraqi soldier told McClatchy news service, using a common Arabic term for the Islamic State. “I was at the 10th Division base there two days ago, and the soldiers cannot leave or patrol,” he said. “Daash controls the streets.”

Islamic State’s proximity to the airport is especially worrisome, because they are now armed with shoulder fired anti-aircraft missiles with a 20-mile range, according to the Iraqi Defense Ministry. The weapons, which Islamic State has grabbed up along with tanks, helicopters and fighter planes as it has seized up vast territory in northern Syria and Iraq, could allow the militants to shut down the airport.

Baghdad is guarded by some 60,000 Iraqi soldiers, but the much smaller and extended Islamic State army has sent them scurrying in the past, raising questions about their discipline and U.S. training. State Department spokeswoman Marie Harf expressed rare confidence in Iraq's military on Friday, saying it is capable of defending Baghdad.

"We don't see an imminent threat to Baghdad at this time," Harf said. "Iraqi security forces in and around Baghdad are strong. They're under constant assessment. The embassy remains open. We continue to conduct business.  We've deployed a significant number of our own military personnel to Iraq and to the region for the protection of American personnel and to advise and assist Iraqi forces.”

But earlier this week, a Pentagon spokesman expressed concern over continuing efforts to take back Fallujah, a major city some 40 miles north of Baghdad that Islamic State overran in the summer and referred to the critical stature of Baghdad.

“There are places where [the Islamic State] continues to make gains in Iraq,” said Navy Rear Adm. John Kirby, press secretary to Defense Secretary Chuck Hagel. “We talked about Hit. We talked about Ramadi. We talked about Fallujah, which is still in contention right now. That’s worrisome, because it’s close to Baghdad.”

The buffer zone that protects Baghdad for now includes much of Anbar province, a key region between Baghdad and Syria. But the Iraqi army's performance under fire has done little to build confidence.

Even as the terrorist army bears down on Iraq’s capital, it already reportedly has sleeper cells positioned inside the city to carry out frequent bombings and assassinations. But a siege or all out invasion for the Middle East’s biggest prize would not be a cakewalk, even for the fearsome army whose penchant for beheading its enemies strikes fear in Iraq’s army.

“ISIS' success and the Iraqi forces' failures show that you can't rule out that it would take Baghdad, but it will be exceedingly difficult,” Ryan Mauro, a national security adviser with The Clarion Project, told FoxNews.com. “The Iraqi government, Shiite militias backed by Iran and the Iranian revolutionary guards covertly operating there will fight to the bitter end to hold onto it. It would require manpower that ISIS isn't believed to have right now.”

“Even Baghdad’s Sunni minority will be largely hostile to the barbarism of ISIS,” Mauro said. “It will be the toughest and bloodiest battle for ISIS to win yet.”

As Baghdad girds for what could be a looming battle, the much smaller city of Kobani, on Syria’s border with Turkey, appears ever closer to falling into the control of Islamic State. Kurds from throughout northern Syria, routed by Islamic State fighters have fled their villages and poured into Kobani. But as Islamic State militants closed in, hundreds of thousands fled into Turkey where they are staying in refugee camps. Those who stayed behind, are fighting Islamic State militants in a door-to-door streetfight that some fear could be a prelude to a similar urban war in Baghdad.

Shutting down or capturing Baghdad‘s airport would give Islamic State’s army frightening leverage in an attack on the city itself. The airport is critical for Western embassies and the complex includes a joint operations center staffed by U.S. military advisers. Without access to the airport, the Iraqi government would also be unable to send reinforcements to a small number of bases in Anbar province that remain in government control, including at Ramadi, Haditha and Asad.

While U.S.-led airstrikes, as in Syria, can aid local ground troops, it is those forces that ultimately must fight Islamic State unless coalition put boots on the ground. More than two dozen airstrikes in the area, mainly near Fallujah and Ramadi, have helped create a buffer zone for Iraqi army troops to operate. But the terrorist army remains in control of a vast arc north of Baghdad and controls the main road leading west from Baghdad to Jordan.