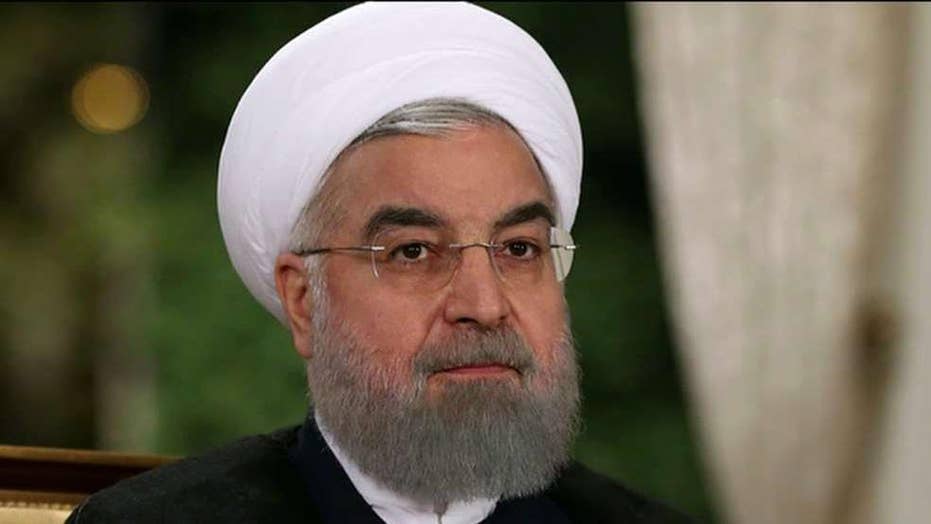 Iran has threatened to disrupt oil shipments through Strait of Hormuz in response to U.S. ending waivers; Jeff Paul reports.

The State Department has said that Iran should release all "innocent U.S. persons" held in that country "immediately" after Iran's foreign minister claimed Wednesday to have offered a prisoner swap to the Trump administration six months ago.

Javad Zarif told an audience at the Asia Society in New York City that Tehran had not yet received a response from Washington, adding: "If they tell you anything else, they're lying."

In response, a State Department spokesperson noted that the U.S. "repeatedly" had called for a "humanitarian resolution of these cases."

"The Iranian regime can demonstrate its seriousness regarding consular issues, including Iranians who have been indicted or convicted of criminal violations of US [sic] sanctions laws, by releasing innocent U.S. persons immediately," the spokesperson said. "We call on Iran to free all unjustly detained and missing U.S. persons, including Xiyue Wang, Robert Levinson, Siamak Namazi, and Nizar Zakka, among others."

Zarif didn't specify whom Iran might trade, though he mentioned the case of Nazanin Zaghari-Ratcliffe, a British-Iranian woman detained in Iran for nearly three years. On the other side, he cited U.S. extradition warrants against an Iranian man with a heart condition held in Germany for trying to buy spare parts for civilian airplanes, and against an Iranian woman imprisoned in Australia for three years who was the translator in a purchase of equipment for Iranian broadcasting. He did not name either of them.

As foreign minister, Zarif said, he could involve himself only on humanitarian grounds and where there is a possibility of a prisoner exchange, which he did once with the United States in January 2016.

"We believe their charges are phony," he said of Iranians held in the U.S. "The United States believes the charges against these people in Iran are phony."

"And I put this offer on the table publicly now: Exchange them," he said. "Let's discuss them. Let's have an exchange. I'm ready to do it, and I have authority to do it."

Four Americans are known to be held in Iran. Wang, a Chinese-American graduate student, was sentenced to 10 years in prison in July 2017 for allegedly "infiltrating" the country while doing doctoral research on Iran's Qajar dynasty.

Wife of Princeton Ph.D. student held in Iran insists her husband is not a spy

Xiyue Wang is serving a 10-year term in Iran's notorious Evin prison and is one of at least four Americans now being in Iran; national security correspondent Jennifer Griffin reports.

Namazi and his octogenarian father, Baquer, a former representative for the U.N. children's agency UNICEF who served as governor of Iran's oil-rich Khuzestan province under the U.S.-backed shah, were detained in 2015 and 2016, respectively, and have been serving 10-year sentences on espionage charges.

Zakka, a U.S. permanent resident from Lebanon who advocated for Internet freedom and has done work for the U.S. government, was detained in 2015 and sentenced to 10 years on espionage-related charges.

Levinson, a former FBI agent who vanished in 2007 while on an unauthorized CIA mission in Iran, remains missing. Iran has said Levinson is not in the country and it had no further information about him, though his family has held Tehran responsible for his disappearance.

Stephany Curry, daughter of former FBI agent Robert Levinson, says her family is hopeful that Trump has the deal-making skills to bring her father home from Iran.

Others held by Iran include Iranian-American art dealer Karan Vafadari and his Iranian wife, Afarin Neyssari, who were arrested in July 2016 and received 27-year and 16-year prison sentences, respectively.

Iranian-American Robin Shahini was released on bail in 2017 after staging a hunger strike while serving an 18-year prison sentence for "collaboration with a hostile government." Shahini has since returned to America and is now suing Iran in U.S. federal court.