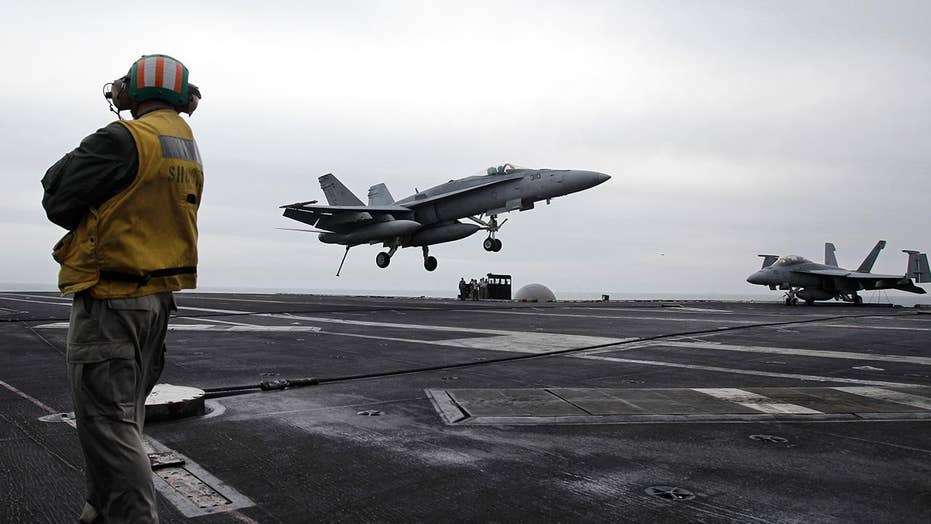 Members of Congress set to be briefed on the Iran threat; Rich Edson reports from the White House.

A rare training exercise between two large U.S. warships took place in the northern Arabian Sea over the weekend as tensions continue to increase with Iran, the U.S. Navy said Sunday.

The Navy said the exercises and training were conducted with the USS Abraham Lincoln aircraft carrier strike group in coordination with the U.S. Marine Corps.

Also taking part in exercises were the Kearsarge Amphibious Ready Group and the 22nd Marine Expeditionary Unit, both deployed to the U.S. Fifth Fleet area of operations in the Persian Gulf.

“The exercises and training we are doing with Amphibious Squadron Six, the 22nd Marine Expeditionary Unit and USS Kearsarge are aimed towards increasing our lethality and agility to respond to threats, and deterring destabilizing actions in this important region,” Rear Adm. John Wade, commander, Carrier Strike Group 12, said in a statement.

In this photo released by the U.S. Navy, the Abraham Lincoln Carrier Strike Group and Kearsarge Amphibious Ready Group conduct joint operations in the U.S. 5th Fleet area of operations over the weekend. (US Navy photo by Mass Communication Specialist Seaman Catie Coyle)

The exercises, conducted Friday and Saturday, included air-to-air training and steaming in formation and maneuvering. Establishing joint communications to "rapidly enable a command and control environment" was also included in the exercises, according to the Navy.

Marines from the amphibious assault ship Kearsarge also rehearsed boarding training from helicopters -- practicing an assault on an American guided-missile destroyer in the Lincoln strike group, according to a statement from the U.S. Navy. The Navy said Marine Harrier jets from the Kearsarge also flew with Super Hornet jets from Lincoln.

“We also had the Harriers receive gas from our airborne F/A-18 mission tanker -- something that rarely happens," said Lt. Cmdr. Michael Scott, a pilot with Carrier Air Wing 7 operations who led the dissimilar air combat training. "It was pretty neat to see the Harrier up close in the air.”

The Navy said the close air support provided a "unique training opportunity" as it included multiple types of tactical aircraft that do not typically operate together.

Last week, the U.S. Central Command (CENTCOM) said its forces in the region had been placed on “high alert,” but no evidence was presented to justify the elevated security posture. The U.S. also has ordered nonessential staff out of its diplomatic posts in Iraq.

In this Friday, May 17, 2019, photo, released by the U.S. Navy, sailors work around an MV-22 Osprey as it lands on the flight deck of the Nimitz-class aircraft carrier USS Abraham Lincoln in the Arabian Sea. (U.S. Navy photo by Mass Communication Specialist 3rd Class Amber Smalley)

After pressure to explain the military build-up and change of posture, Pentagon officials said last week they are in the process of declassifying several satellite photos that they say shows cruise missiles aboard small Iranian vessels.

The images appear similar to another brazen display in April 2015, which prompted another American carrier strike group to be dispatched. U.S. officials are divided about what the recent images mean — if it is more a message from Iran on the one-year anniversary of the Trump administration ripping up the nuclear agreement or an actual new threat.

Pentagon officials have taken great pains to emphasize the new American forces sent to the region are to deter Iran, not start a war.

On Sunday, Saudi Arabia's minister of state for foreign affairs said the Kingdom does not want war but will not hesitate to defend itself against Iran after the country's energy sector was targeted this past week amid heightened tensions in the Persian Gulf.

"The kingdom of Saudi Arabia does not want war in the region and does not strive for that... but at the same time, if the other side chooses war, the kingdom will fight this with all force and determination and it will defend itself, its citizens and its interests," Adel al-Jubeir told reporters.

The kingdom has blamed the pipeline attack on Iran, accusing Tehran of arming the rebel Houthis, which a Saudi-led coalition has been at war with in Yemen since 2015. Iran denies arming or training the rebels, who control much of northern Yemen, including the capital, Sanaa.

The head of Iran's Revolutionary Guard, Gen. Hossein Salami, was quoted Sunday as saying Iran is not looking for war. But he said the U.S. is going to fail in the near future "because they are frustrated and hopeless" and are looking for a way out of the current escalation. His comments, given to other Guard commanders, were carried by Iran's semi-official Fars news agency.