Rep. Tulsi Gabbard warns that a war with Iran would make the Iraq War 'look like a cakewalk'

The devastation and the cost of a conflict with Iran would be far greater than anything we've experienced so far in Iraq, says Democratic presidential candidate Congresswoman Tulsi Gabbard.

Rep. Tulsi Gabbard said she looks forward to a briefing next week that will provide more clarity on the rising tensions between the United States and Iran, and warned that a war with the country would dwarf the challenges of the Iraq War.

The Hawaii congresswoman, a 2020 Democratic presidential hopeful and veteran of the Army National Guard, told "Fox News at Night" host Shannon Bream that she has seen first-hand the cost of war, and that the "devastation and cost" of a war with Iran would be "far greater than anything we've experienced before."

As a combat veteran and former member of the House committees on foreign affairs and national security, Gabbard argued that she knew all too well the "high human cost of war."

"In these wars across the Middle East and Iraq, thousands of my brothers and sisters in uniform lost their lives and many were injured," she said.

AMERICA NEEDS TO BE 'THE ADULT IN THE ROOM' WITH IRAN, SAYS HOUSE DEMOCRAT CHRISSY HOULAHAN

"I also know the cost on the American people," she continued. "The trillions of dollars we spent since 9/11 on waging wasteful regime-change wars, how those wars have undermined our national security and how they have strengthened ISIS and Al Qaeda."

President Trump has taken action in recent weeks in response to what he's deemed "credible threats" from Iran. On Thursday, a commander of Iran’s Quds Force allegedly told Iran-backed militias in Iraq to “prepare for proxy war” amid rising tensions with the United States.

Gabbard expressed her concern that it appeared the United States is "walking dangerously" down the path to war with Iran, which she said would have devastating consequences.

"What is important that the American people know is a war with Iran would make the war in Iraq look like a cakewalk," she said. 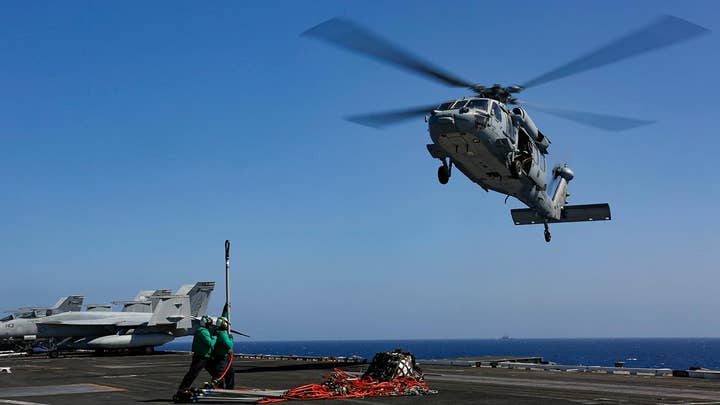 President Trump and his administration have consistently maintained that they want to avoid a war with Iran, but Gabbard argued that their actions are speaking louder than words.

"While Trump and others in his administration are saying they don't want to go to war with Iran, I hear them saying that more now that they are getting a lot of pushback from our allies like those in the U.K., when in fact the actions of the administration have been telling us another story," she continued.

"It is pushing us closer and closer to the process of a war with Iran."