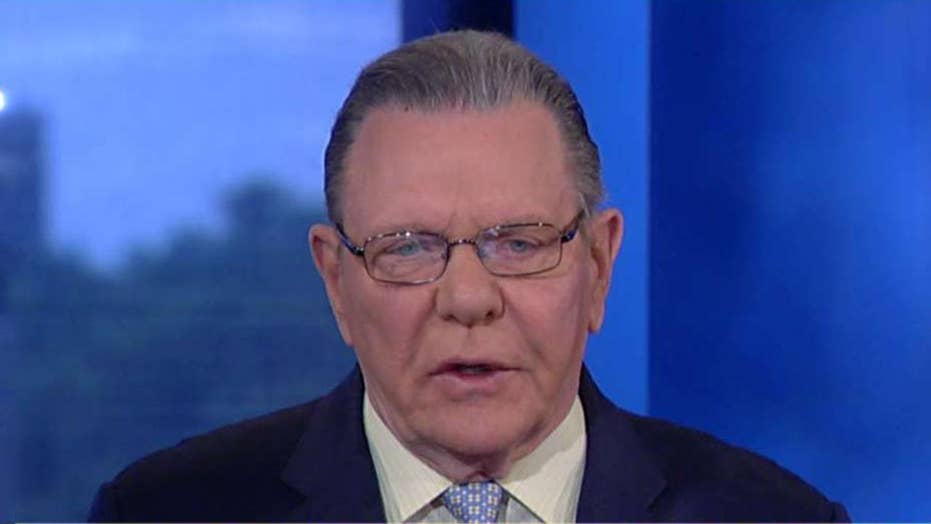 Despite provocations in the Middle East, President Trump was implementing an effective, "first rate" pressure campaign on the Iranian regime.

That was how Fox News senior strategic analyst Gen. Jack Keane described the situation on Saturday. Amid attacks on oil tankers and a U.S. military drone, some questioned whether Trump made the right decision in pulling out of the Iran nuclear deal.

Former Obama adviser Ben Rhodes, who helped spearhead the deal, argued that the current tensions were "eminently predictable" given Trump's decision. But Keane, while appearing on "America's News Headquarters," praised the administration as the first to be on a "strategic offensive against Iran in 39 years."

Keane described the administration's maximum pressure campaign was "first rate." He warned that Iran was trying to distract the U.S. from that campaign and that the administration should persevere if it wanted to change the nation's behavior. "That has got to be our strategic focus," he told Fox News host Leland Vittert.

KINZINGER: TRUMP'S IRAN CALL WILL 'PALE IN COMPARISON' TO NEXT RESPONSE

His comments came just a day after the president announced that he ordered a military strike on Iran, only to renege at the last minute due to concerns over the number of casualties. Trump argued that the attack -- potentially killing 150 people -- wouldn't have been a "proportionate" response to Iran's decision to strike down an unmanned drone.

It's unclear whether Iran's national leadership approved of the strike, a fact that Trump apparently knew as well. But Keane said that he took Trump's explanation at "face value," suggesting that his decision was mostly based on the casualty estimate his advisers gave him.

Trump's decision prompted Rep. Justin Amash, R-Mich., and House Speaker Nancy Pelosi, D-Calif., to demand he seek approval from Congress before approving more strikes. While it's unclear how Trump will react, his administration has maintained that it would use force if necessary.

"The Iranians know it -- if they kill Americans, the response is going to be pretty significant," Keane said on Saturday.

"What we have here is a huge opportunity ... The president now, because he's exercised restraint, has leverage. He can go to the Europeans, to the Asians," he said, noting that Trump could push other nations to join his pressure campaign.