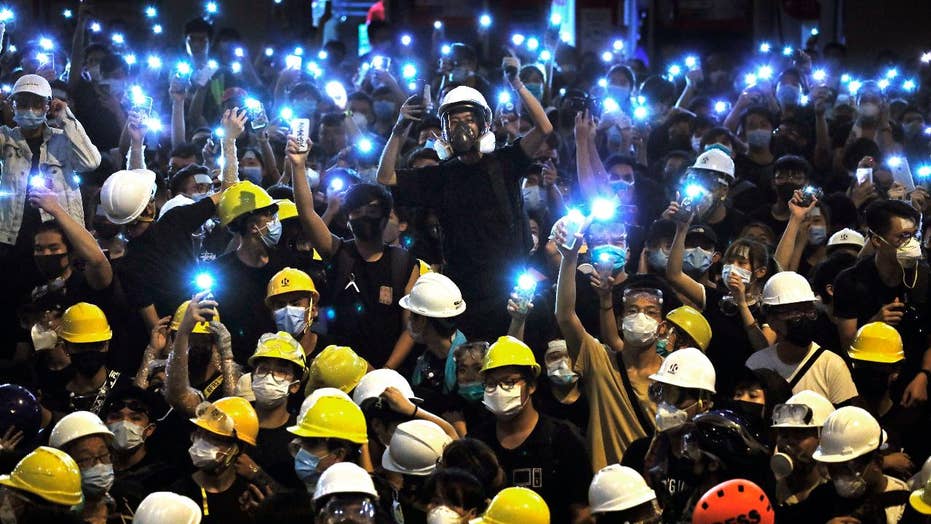 Student activists stage a protest in front of police headquarters demanding the release of those arrested in a riot; Greg Palkot reports from Hong Kong.

Hong Kong activists are preparing for more protests this weekend in the hope of sending a message to world leaders gathering for the G20 summit in nearby Osaka, Japan.

"This is not about a power struggle," Civil Human Rights Front leader Bonnie Leung told the Associated Press. "This is about the values that make the world a better place. The whole world, whoever has connections with Hong Kong, would be stakeholders."

The semi-autonomous enclave has been the scene of massive protests for nearly two weeks after Beijing-backed Chief Executive Carrie Lam attempted to pass an extradition bill that would allow criminal suspects in Hong Kong to be apprehended and extradited to mainland China for trial.  Analysts say that the bill puts critics of China at risk of torture and unfair trials in the mainland and defeats the purpose of the “one country, two systems” framework established for Hong Kong since 1997.

Protesters sing after a march against an extradition bill outside Legislative Council in Hong Kong on Sunday, June 16. (AP)

The millions and more who marched in a June 16 demonstration against the extradition bill -- which has been put on legislative hold -- are becoming agitated that Hong Kong may become just another Chinese city as Beijing expands its influence.

China has promised that Hong Kong would get to keep freedoms absent in the communist-ruled mainland until 2047. But 22 years after the British handover, many in Hong Kong believe they cannot live without those rights.

Samson Yuen, a professor at Hong Kong’s Lingnan University, told AP that the Hong Kong protestors come from all walks of life but share a common goal to preserve their freedoms.

“This protest has drawn everybody in town together,” he said. “They really value the freedom to speak up and protest.”

Most Hong Kong citizens come from families who fled poverty and political turmoil in the communist mainland.  While British rule did not bestow Hong Kong with the right of democracy, it laid the groundwork for strong civic institutions, educational systems, health care, and a laissez-faire trading system dominated by businesses dedicated to keeping Hong Kong as it is.

Further protests are also planned for the July 1 anniversary of the British handover of Hong Kong to China – it is unclear if the turnout for this demonstration will match those of earlier this month.