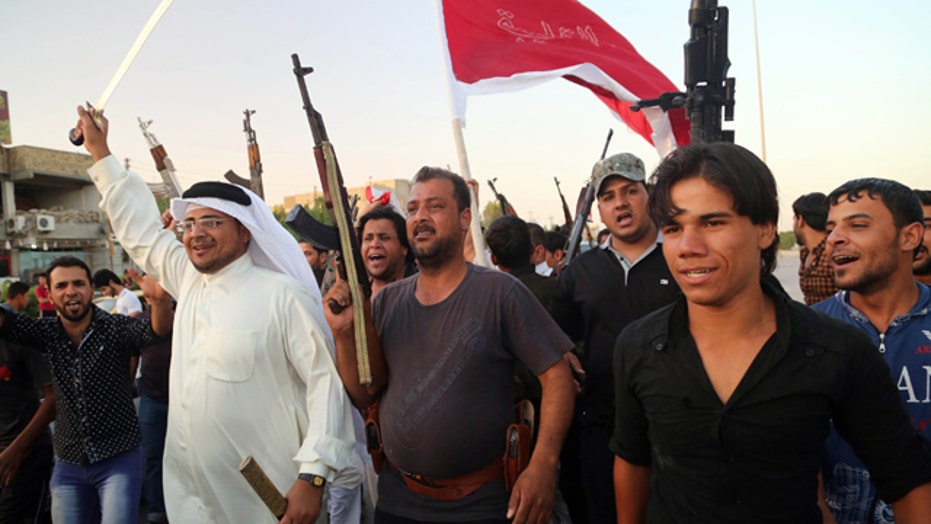 Should US work with Iran to stop Iraq militants?

Staff Sgt. Paul Floyd (Ret.) and James Phillips weigh in on the options the White House has in Iraq

As the Islamic militant group known as ISIS continues to capture major Iraqi cities and threaten Baghdad, White House officials say they have not ruled out the potential of cooperation with Iran to stop the Sunni fighters.

Fox News National Security Analyst KT McFarland spoke to Paul Floyd and James Phillips about the developing situation. Floyd serves as a military analyst for Stratfor, a global intelligence firm, and James Phillips is the senior research fellow for Middle Eastern affairs at the Heritage Foundation.

With Baghdad threatened by the militants' advance, U.S. officials are on high alert. But Floyd believes there is not necessarily a risk of Baghdad being captured by the Islamic State of Iraq and the Levant (ISIS).

“The idea that they [militants] can have a conventional military assault that continues south all the way into Baghdad … it really isn’t reasonable,” Floyd said. “The entirety of the Iraqi army hasn’t fallen apart yet … and some of the more competent units that have been centered in Baghdad are now moving in to balance out the initial gains by ISIS.”

Phillips says the potential of the U.S. working with Iran on the situation is a sign of “desperation.”

“We are talking about turning to Iran to help stabilize Iraq – that effort in itself will weaken our pressure on Iran in nuclear [negotiations],” Phillips said.

Floyd points out the major concern for the West, beyond working with Iran, is making sure ISIS does not become a “transnational jihadists threat,” that could later use Iraq as a base for terrorism.

“If they are able to consolidate their stranglehold over eastern Syria, western Iraq then they will use it as a base for exporting their Islamist revolution elsewhere in region,” Phillips said. “We are seeing the formation of a dangerous sanctuary in the heart of the Arab world.”