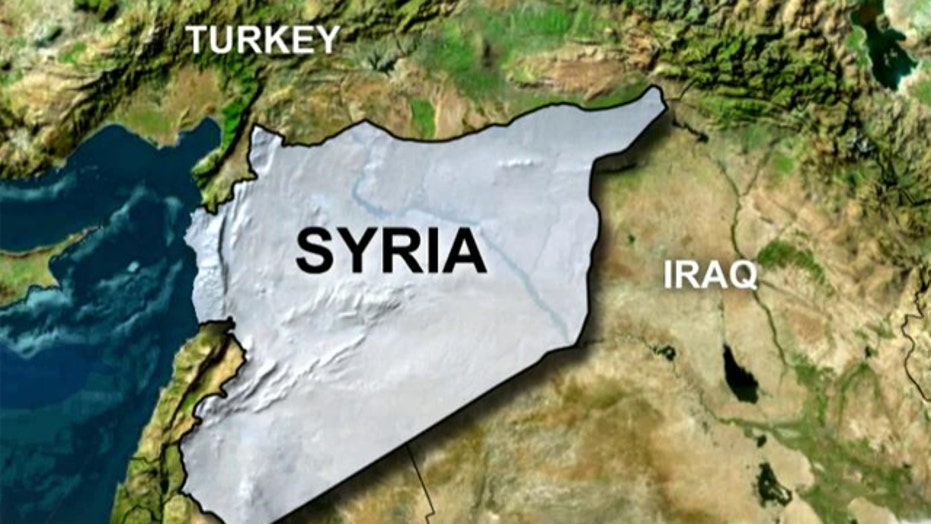 Report: Syria claims it shot down US surveillance plane

The Predator drone that went down over Syria on Tuesday appears to have been shot down, most likely by Syrian air defense systems near Latakia in northwest Syria, a senior U.S. military source told Fox News Wednesday.

The evidence so far points to a Syrian surface-to-air missile that brought down the MQ1 Predator, the source said. If confirmed, it would be the first American aircraft to go down over Syria since the U.S. expanded its aerial campaign against the Islamic State extremist group in the country in September.

Images broadcast on Syrian television Wednesday showed the drone in pieces after it crashed to the ground, suggesting it was shot down. Soldiers in camouflage could be seen loading some of the debris into the back of a truck.

The drone has a built-in mechanism in case its system goes down that allows it to return to base automatically.

U.S. officials are investigating why the unarmed drone was targeted by the Syrians and whether it was a case of mistaken identity. Pentagon officials were not viewing the incident as an escalation of the conflict, but were still investigating the circumstances of the crash Wednesday.

The Pentagon has not commented publicly about the incident.

Earlier Wednesday, a Syrian military official said that an investigation was underway into the downing of the reconnaisance aircraft.

The Syrian official said the aircraft entered Syrian airspace from the sea and was shot down over Ras Shamra, four miles north of the coastal city of Latakia. He said the aircraft was flying over an area devoid of "armed gangs," using a term often used by Syrian authorities to refer to opposition groups fighting President Bashar Assad's forces.

The official spoke on condition of anonymity because he was not authorized to give statements to the press.

More than 220,000 people have been killed in four years of conflict in Syria, which started with largely peaceful protests calling for reforms and escalated into civil war following a brutal government crackdown.

In a statement released late Tuesday, the main Western-backed Syrian opposition group called on the United Nations to send a fact-finding mission to investigate an alleged poison gas attack on a rebel-held northern town.

The Syrian National Coalition and activists inside Syria say the government carried out a chlorine gas attack on the town of Sarmin late Monday, killing six people and leaving dozens more struggling to breathe. Syrian authorities denied the allegations.

In the statement, coalition vice president Hisham Marwa called for an on-site UN investigation as soon as possible. He also demanded the Security Council enforce a recent resolution that condemns the use of toxic chemicals such as chlorine in Syria and threatens military action in case of violations.

"The UN Security Council must take all necessary measures that ensure the enforcement of the resolution," Marwa said.

The international medical humanitarian organization, Medecins Sans Frontieres, said six people were killed and 70 others poisoned in the attack, quoting reports by Syrian doctors in contact with the group.

It said the events and symptoms described by the medical staff of the hospital clearly indicate the presence of chlorine poisoning.

"Attacking a village and its civilian population with chlorine shows once again that the Syrian conflict knows no limits," said Dr. Mego Terzian, MSF president.

The spokesman for the Organization for the Prohibition of Chemical Weapons, Peter Sawczak, said Wednesday the watchdog agency views "any allegations of chemical weapons use with concern and we are monitoring the situation closely."

Monday's purported attack would be one of the most serious uses of poison gas in Syria since a deadly chemical attack outside Damascus in August 2013.

An OPCW fact-finding mission concluded "with a high degree of confidence" that chlorine was used on three rebel-held villages in Syria last year, killing 13 people. It did not assign blame. Last month, the OPCW condemned the use of chlorine in Syria as a breach of international law.

Despite the new Security Council resolution, an international consensus on who was responsible for a violation would be needed to take any action, which would likely prove difficult. The Security Council remains divided over Syria's civil war, with the U.S. and its allies supporting the opposition and Russia backing Syrian President Bashar Assad.