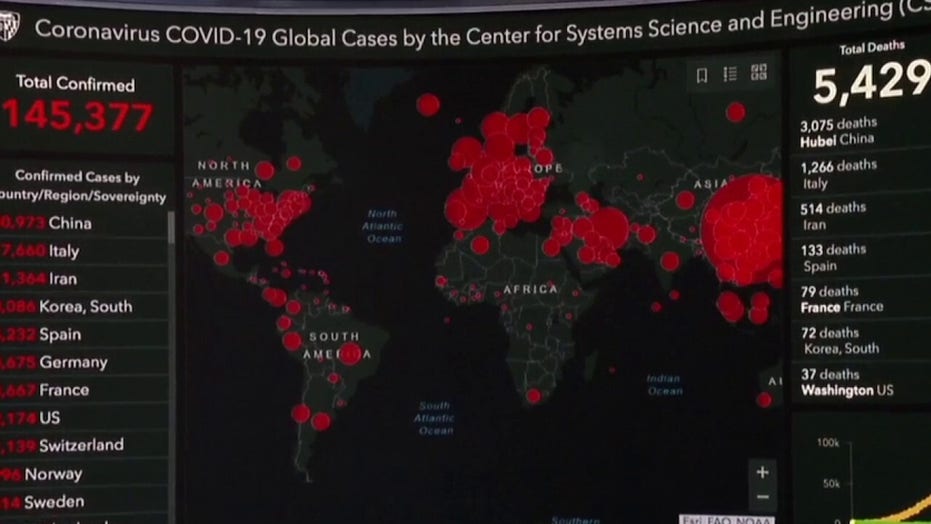 China and Iran have not been transparent while Italy has. Why the global number of coronavirus cases are likely much higher. Dr. Marty Makary gives his take.

In a “tragic milestone,” Europe has surpassed China to become the epicenter of the novel coronavirus pandemic that has claimed the lives of more than 5,000 people around the world.

Tedros Adhanom Ghebreyesus, the director-general of the World Health Organization (WHO), said Friday night they have seen more than 132,000 cases of COVID-19 in 123 countries since it first emerged in late December in the Chinese city of Wuhan.

Overnight Friday, the number of cases surged past 145,000 with the most confirmed cases coming from China, Italy, and Iran.

“Europe has now become the epicenter of the pandemic with more reported cases and deaths than the rest of (the) world combined apart from China,” Tedros said via a virtual news conference in Geneva.

“More cases are now being reported every day than were reported in China at the height of its epidemic.” 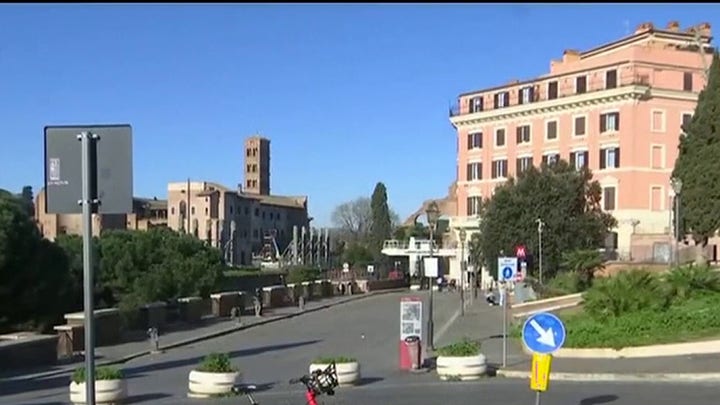 Italy, the epicenter of the outbreak in Europe, recorded its highest daily toll yet.

Over the past 24 hours, it has recorded more than 250 deaths, taking the total to well past 1,000 with more than 17,600 infections overall. In the three weeks since the country identified its first virus cluster, Italy initiated an unprecedented lockdown, ordering businesses to close and restricting people’s movement.

Mayors of many Italian cities, including Rome and Milan, decided to close public playgrounds and parks.

Among the parks whose gates were locked Saturday was Rome’s sprawling Villa Pamphilj, a hilly expansive of umbrella pines and palm trees on the former grounds of a noble family.

Meanwhile, Spain, the worst-affected European nation after Italy, has seen more than 132 deaths. Health officials said Saturday coronavirus infections have reached 5,753 people, of which almost 3,000 are in the capital, Madrid. 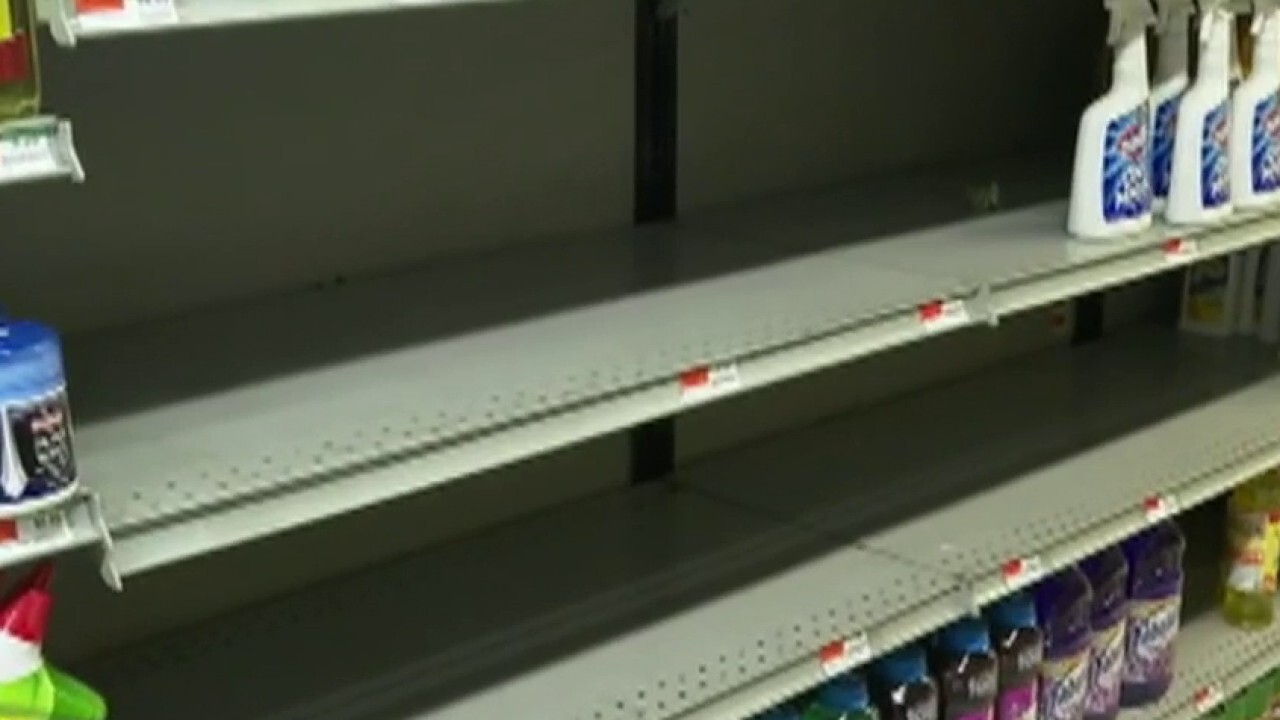 Stores struggle with supply as consumers stock up amid coronavirus crisis

That represents a national increase of more than 1,500 in 24 hours.

Spanish Prime Minister Pedro Sanchez is expected to declare a state of emergency on Saturday that will effectively lock down the country similarly to Italy.

Residents in Madrid and northeast Catalonia woke up Saturday to shuttered bars and restaurants while other nonessential commercial outlets were closed by regional authorities.

In just 24 hours, the number of confirmed cases also spiked in some places. France saw an additional 800 cases to reach more than 3,600 by Friday, while Britain went from 590 to nearly 800.

Despite labeling the outbreak France's "biggest health crisis in a century," French President Emmanuel Macron confirmed this week that Sunday's local elections would go ahead. The government issued guidelines to polling stations across the country, asking people are kept least 3 feet away from each other at all times.

The French interior minister even asked voters to bring their own pens to avoid transmitting the virus that way.

Cars drive north to the German-Danish border crossing near Flensburg, Germany, Saturady, March 14, 2020. Denmark closes its borders from noon in the Coronavirus crisis until further notice. (Carsten Rehder/dpa via AP)

Meanwhile, Denmark, which has so far seen 827 confirmed cases of the virus, announced late Friday it would close all its borders - land, sea, and air - at midday on Saturday until April 13. All passenger traffic to and from Denmark will be stopped.

Travelers will be turned away at the border unless they can show that they have "a legitimate reason" to be there, such as that they are Danish citizens or foreign nations living and working in the country.

"We are in uncharted territory," Danish Prime Minister Mette Frederiksen said. "We're in the middle of something none of us hase faced before."

"I know that the overall list of measures (announced by Denmark is very extreme and will be seen as very extreme, but I am convinced that it's worth it."

In the Czech Republic, the government ordered retail businesses including shopping malls to close as of Saturday morning. The exceptions include essential services such as supermarkets, gas stations, and pharmacies, electronic stores, and places selling newspapers, glasses, and supplies for pets.

The country, which has the world's highest per capita consumption of beer, will also close bars, restaurants, and casinos. The measures are set to be in place for at least 10 days.

The Czech Republic has 150 cases of coronavirus.

A masked man walks past posters advertising the upcoming local elections, in Saint Jean de Luz, southwestern France, Saturday, March 14, 2020. Authorities fear the new coronavirus and the COVID-19 disease it causes will scare people away from polling stations and have a serious impact on turnout. (AP Photo/Bob Edme)

Earlier this week, U.S. President Donald Trump announced that travel from Europe would be restricted for 30 days – although the U.K. and Ireland are not included. The Department of Homeland Security clarified that it affects most foreign nationals who were in Europe’s passport-free “Schengen Area” within 14 days prior to traveling to the U.S.

The area in question includes 26 counties including France, Italy, Spain, Germany, Greece, and others. The U.K., who left the European Union in January after four decades, is not part of the “Schengen Area.”

However, on Saturday the Trump administration announced that it was expanding the travel ban to include the U.K. and Ireland.

"We are looking at it very seriously, yeah, because they've had a little bit of activity, unfortunately," the president said during a White House press briefing. "So we're going to be looking at that - we actually already have looked at it and that is going to be announced." 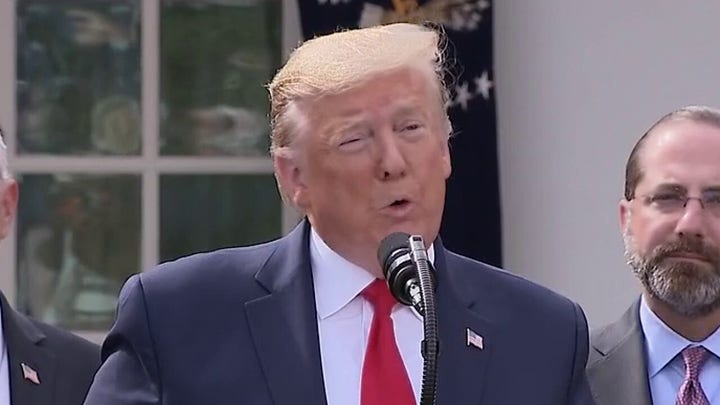 Tedros urged countries to use aggressive measures, community mobilization, and social distancing to save lives.

“Do not just let this fire burn,” he said.

The spreading pandemic showed that power and influence offer no protection. Among those testing positive were the Canadian prime minister's wife, a top aide to Iran's supreme leader, Miami's mayor, a Brazilian official who met with Trump, and an Australian Cabinet minister who met with the U.S. attorney general and Trump's daughter, Ivanka.

Pressed by reporters, Trump, who also met with the Brazilian official, said he will “most likely" be tested for the virus “fairly soon," reversing an earlier White House statement.