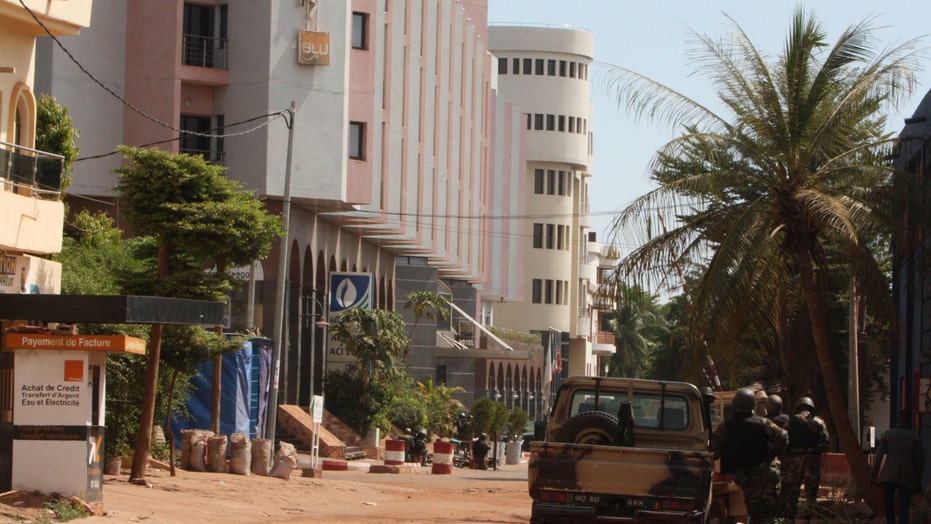 Fate of hostages is unclear; standoff with attackers reportedly continues

The deadly hostage situation at a luxury hotel in Mali's capital city ended Friday, with a U.N. report indicating dozens of bodies were littered across multiple floors of the building. One of those killed was an American, according to the State Department.

The siege "has concluded," State Department spokesman John Kirby announced Friday. He said about a dozen Americans were rescued uninjured from the Radisson in Bamako, but a State Department official later said one American had been killed. That person was not immediately identified.

Some of the freed Americans were U.S. embassy personnel, Kirby said.

Some attackers may have remained inside the hotel. A Mali security ministry spokesman told Reuters they "dug in" on upper floors of the building.

"They are alone with the Malian special forces who are trying to dislodge them," spokesman Amadou Sangho said. Al Qaeda-linked jihadists claimed responsibility for the siege.

A U.N. official told The Associated Press that initial reports from the field indicate 27 people were killed in the attack. The official, speaking on condition of anonymity because the operation is still ongoing, said 12 bodies were found in the basement and 15 bodies were found on the second floor.

Another U.N. official, Mali mission spokesman Olivier Salgado, said two extremists have been killed and that forces were going from room to room, checking for more casualties.

At least one guest reported the attackers instructed him to recite verses from the Koran before he was allowed to leave the hotel, Malian army commander Modibo Nama Traore told The Associated Press.

Traore said 10 gunmen stormed the hotel Friday morning shouting "Allahu Akbar," or "God is great," in Arabic before firing on the guards. A staffer at the hotel who gave his name as Tamba Diarra said over the phone that the attackers used grenades in the assault.

Al-Mourabitoun, a militant group based in northern Mali, said on Twitter that it was behind the attack, but the claim could not immediately be verified. The group is led by notorious one-eyed jihadist Mokhtar Belmokhtar, who gained recognition in 2013 for an attack on an Algerian gas plant that left 40 people dead, including three Americans.

A handful of jihadi groups, some linked to Al Qaeda, seized the northern half of Mali -- a former French colony -- in 2012 and were ousted from cities and towns by a French military intervention.

The Brussels-based Rezidor Hotel group that operates the hotel said the assailants had initially "locked in" 140 guests and 30 employees.

The White House said President Obama was briefed about the attack by his national security adviser, Susan Rice. The U.S. Embassy in Mali told citizens to shelter in place amid reports of an "ongoing active shooter operation."

In August, the embassy had issued a message warning Americans of a "heightened security risk to westerners in southern Mali, including the area outside Bamako city."

The hotel raid Friday unfolded one week after the attacks on Paris that killed 130 people.

One witness, a Guinean singer, told Reuters that he heard the attackers speaking English. "I heard them say in English ,'Did you load it?', 'Let's go'," Sékouba Bambino Diabaté told the news agency after he was freed.

French President Francois Hollande said France was ready to help Mali with all means necessary in the wake of the attack and urged French citizens in Mali to make contact with the French Embassy there "in order that everything is made to offer them protection."

A top official at the French presidency told The Associated Press that French citizens were in the hotel but could not give more. The official spoke anonymously in line with presidency policy.

In Belgium, Foreign Minister Didier Reynders said there were four Belgians registered at the attacked hotel but it's unclear if they were taken hostage by the gunmen or not.

The website of the official China Daily newspaper also cited an unidentified witness as saying one Chinese citizen had been rescued.

Mali's President Ibrahim Boubacar Keita has cut short its trip to Chad where he was attending a meeting of G5 Sahel.

Nov. 20, 2015: In this TV image taken from Mali TV ORTM, a security officer gives instructions to other security forces inside the Radisson Blu Hotel in Bamako, Mali. (Mali TV ORTM/AP)

The Mali presidency said on Twitter that Keita will be back to Bamako "in the next hours."

A spokesman for the service who was not authorized to be publicly named said they are heading Friday from two different units of special police forces trained for emergency situations.

Even after the French-led military intervention in early 2013 that drove extremists from northern towns and cities in Mali, the northern part of the country remains insecure and militant attacks have extended farther south this year, including the capital. In March, masked gunmen shot up a restaurant in Bamako that is popular with foreigners, killing five people.

About 1,000 French troops remain in the country. The Netherlands also has troops working with the UN mission in Mali. According to the Dutch defense ministry, some 450 Dutch military personnel are taking part in the mission along with four Apache and three Chinook helicopters. Most of the Dutch force is based in Gao, but there are a few officers at the U.N. mission headquarters in Bamako.