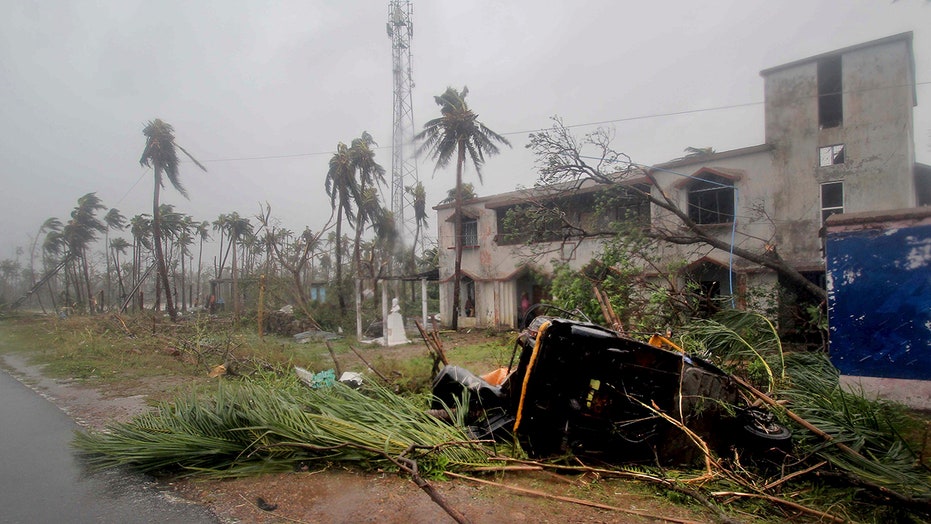 Three people have died and more than a million people have been displaced after Cyclone Fani tore through India’s eastern coast on Friday, lashing beaches with rain and winds gusting up to 127 miles per hour.

The tropical storm, a grade 5 storm, made landfall early Friday in the coastal state of Odisha and brought down trees and power lines. The “extremely severe” cyclone impacted the weather across the Asian subcontinent with its effects felt as far away as Mount Everest, officials said.

Around 1.2 million people were evacuated from low-lying areas of Odisha and moved to nearly 4,000 shelters, according to India’s National Disaster Response Force. Meanwhile, the airport in Kolkata was closed until at least Saturday and rail lines were closed.

An abandoned house and trees bend with gusty winds ahead of the landfall of cyclone Fani on the outskirts of Puri, in the Indian state of Odisha. (AP Photo)

Some 200 trains were canceled across India.

An elderly man died of a heart attack in a storm shelter and a teenager was killed by a falling tree, Sky News reported, citing local reports.

A third person – a woman – was killed by flying debris.

In Bhubaneswar, a city in Odisha famous for an 11th-century Hindu temple, palm trees whipped back and forth like mops across skies made opaque by gusts of rain.

Videos shared on social media showed the impact of the storm, with one showing a bus being turned to its side by strong winds.

It is a "very, very scary feeling," said Tanmay Das, a 40-year-old resident, who described "the sound of wind as if it will blow you away."

30 MILLION UNDER FLASH FLOOD WATCHES FROM TEXAS TO ILLINOIS, AFTER SEVERE STORMS KILL 2 IN OKLAHOMA

The national highway to Puri, a popular tourist beach city with other significant Hindu antiquities, was littered with fallen trees and electricity poles, making it impassable.

Street shops are seen collapsed due to gusty winds preceding the landfall of cyclone Fani on the outskirts of Puri, in the Indian state of Odisha. (AP Photo)

At least 10 villages had been inundated with water in coastal Patuakhali district in southern Bangladesh after flood embankments were breached by the force of the cyclone, according to local reports.

By Friday afternoon, Fani had weakened to a “very severe” storm as it hovered over Odisha. It is expected to move north-northeast toward the Indian state of West Bengal by Friday evening, the India Meteorological Department said.

The National Disaster Response Force dispatched 54 rescue and relief teams of doctors, engineers and deep-sea divers to flood-prone areas along the coast and as far afield as Andaman and Nicobar Islands, a group of islands that comprise a union territory about 840 miles east of mainland India in the Bay of Bengal.

Up to four inches of rain were expected in much of Sri Lanka, the island nation off the eastern tip of India.

More than 1,430 miles away on Mount Everest, some mountaineers and Sherpa guides were descending to lower camps as the weather worsened at higher elevations. The government issued a warning that heavy snowfall was expected in the higher mountain areas with rain and storms lower down, and asked trekking agencies to take tourists to safety.

On India's cyclone scale, Fani is the second-most severe, equivalent to a Category 3 hurricane.

According to from the Meteorology Department, the storm’s timing is unusual as most extremely severe cyclones tend to hit India’s east coast in the post-monsoon season of October through December.

Some of the deadliest tropical cyclones on record have occurred in the Bay of Bengal. A 1999 "super" cyclone killed around 10,000 people and devastated large parts of Odisha. Due to improved forecasts and better-coordinated disaster management, the death toll from Cyclone Phailin, an equally intense storm that hit in 2013, was less than 50, according to the World Meteorological Organization.