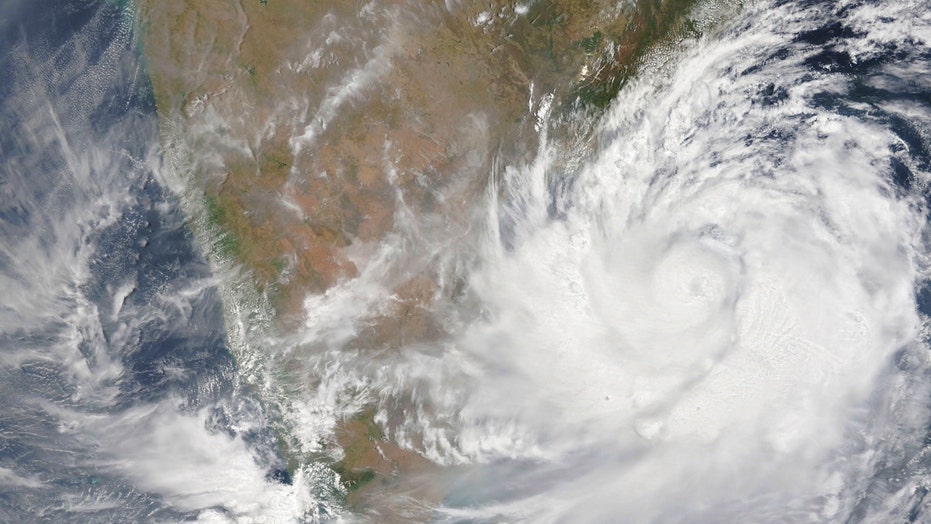 More than 800,000 people have been forced from India's eastern coast on Thursday as an "extremely severe" cyclone moving through the Bay of Bengal is expected to make landfall within 24 hours.

India's Meteorological Department said that Cyclone Fani is a category 3 storm, with sustained winds of 125 mph that is expected to bring "extremely heavy falls" late Thursday over parts of the state of Odisha and its southern neighbor Andhra Pradesh.

The Meteorological Department warned of "total destruction" of thatched-roof huts, flooding of farmland and orchards, and the uprooting of telephone poles due to the approaching storm.

This Wednesday, May 1, 2019 photo provided by NASA shows a satellite view of Cyclone Fani. (NASA via AP)

The dire forecast spurred the evacuation of around 800,000 people in the storm's path, which is the largest evacuation ahead of a natural disaster in the country's history, according to the Times of India.

"Evacuation is in progress on a war-footing," a senior official told the news outlet. "Around 30 percent of the targeted people have so far been moved to safe places."

Indian officials put the navy, air force, army and coast guard on high alert, with more than 800 shelters opened and around 100,000 dry food packets ready to be airdropped after the cyclone passes.

"We've been preparing plans for the last few days to ensure that all the people who are vulnerable will be shifted to our cyclone centers," Odisha's special relief commissioner Bishnupada Sethi said.

30 MILLION UNDER FLASH FLOOD WATCHES FROM TEXAS TO ILLINOIS, AFTER SEVERE STORMS KILL 2 IN OKLAHOMA

Tourists have also been urged to leave coastal towns in West Bengal and Odisha, where heavy to very heavy rainfall is forecast along the south coast on Thursday, Sky News reported.

Hundreds of thousands of people were evacuated along India's eastern coast on Thursday as authorities braced for a cyclone moving through the Bay of Bengal that was forecast to bring extremely severe wind and rain. (AP Photo)

India's National Disaster Management Authority warns that "high to phenomenal" sea conditions are expected for most of the Indian states along the Bay of Bengal, with a 4.9-foot storm surge was expected to inundate low-lying areas.

Officials are concerned that Fani could be the worst storm since 1999 when a cyclone killed around 10,000 people and devastated large parts of Odisha.

In this Wednesday, May 1, 2019 photo, Indian fishermen attempt to bring their boat ashore amid strong winds at Chandrabhaga beach in Puri district of eastern Odisha state, India. (AP Photo)

Prime Minister Narendra Modi met with Cabinet ministers and weather and disaster-response officials for a briefing on the measures being taken.

After striking India, Fani is also forecast to hit Bangladesh, tracking north through ports including Cox's Bazar, the coastal district where more than a million Rohingya refugees live in refugee camps.

The cyclone season in India typically runs from April to December, with storms often creating massive flooding and widespread deaths in India and Bangladesh, according to Sky News.