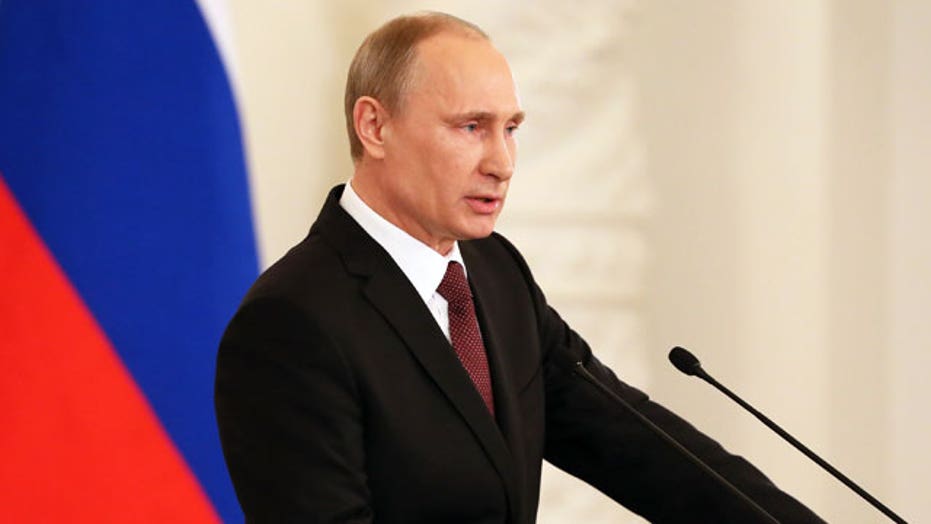 A defiant Russian President Vladimir Putin answered President Obama's announced sanctions against a handful of officials in Putin's inner circle -- but not Putin, himself -- by signing a treaty Tuesday making Crimea a part of Russia.

The signing follows a referendum on Sunday in which residents of Ukraine's southern region overwhelmingly backed the move. The treaty still must be approved by Russia's Constitutional Court and ratified by both houses of parliament. Those steps are considered mere formalities.

Putin signed the treaty with Crimea's prime minister and parliament speaker following a televised address to the nation, in which he vigorously defended Crimea's vote as a restoration of historical justice.

Putin has accused the West of encouraging unrest in Ukraine in order to break its historic ties with Russia, and dismissed Western criticism of the Crimean vote as illegitimate.

A Ukrainian military spokesman said that one Ukrainian serviceman was killed and another injured when a military facility in Crimea was stormed Tuesday by armed men just hours after Putin's speech.

The officer was shot in the chest, the Ukrainian Defense Ministry told Fox News, adding that the Ukrainian government now is allowing its soldiers to use firearms to defend themselves.

The armed men were dressed in uniforms similar to Russian military uniforms and appeared in trucks previously stolen from the Ukrainian military base, the Ministry said.

The attackers took over the base, confiscated documents, arrested the Ukrainian soldiers and are now controlling the base.

The sanctions ordered by Obama include freezing any assets in the U.S. and banning travel into the country of seven ranking Russian government officials and four Crimea-based separatist leaders, Reuters reported.

Some of the Russians mocked the sanctions, the Post reported.

“I quite like the company I have found myself in,” Andrei Klishas, chairman of the Russian Federation Council’s Constitutional Legislation Committee, told the Interfax news service.

“I don’t have any accounts or real estate in the U.S., and as regard private visits, I’ll have to do without them," Leonid Slutsky, who heads a parliamentary committee on Eurasian integration, said, according to the Post.

In a televised address to Russia Tuesday, Putin defended Russia's move to annex Crimea, saying that the rights of ethnic Russians have been abused by the Ukrainian government.

He also called authorities in Ukraine “nationalists, neo-Nazis, Russophobes and anti-Semites,” according to Reuters.

“Those who were behind recent events, they were ... preparing a coup d'etat, another one,” Putin said. “They were planning to seize power, stopping at nothing.”

He denied Western accusations that Russia invaded Crimea prior to a referendum vote there, saying Russian troops were sent there in line with a treaty with Ukraine that allows Russia to have up to 25,000 troops at its Black Sea Fleet base in Crimea.

Putin also said that Crimea's vote Sunday to join Russia is in line with international law, reflecting its right for self-determination.

He pointed at the example of Kosovo's independence bid, supported by the West, and said that Crimea's secession from Ukraine repeats Ukraine's own secession from the Soviet Union in 1991.

“Our Western partners headed by the United States prefer not to be guided by international law in their practical policies, but by the rule of the gun,'' he told a joint session of parliament, according to Reuters. “They have come to believe in their exceptionalism and their sense of being the chosen ones. That they can decide the destinies of the world, that it is only them who can be right.”

Putin added that he will never seek to spark a confrontation with the West, but said he would defend Russia’s interests.

Putin signed a decree Monday recognizing Crimea as a "sovereign and independent country.” Earlier Monday, the United States and the European Union announced asset freezes and other sanctions against Russian and Ukrainian officials involved in the Crimean crisis.

Denouncing Russia's actions in Crimea as nothing more than a "land grab," Vice President Joe Biden warned Russia on Tuesday that the U.S. and Europe will impose further sanctions as Moscow seeks to annex the Ukrainian territory.

Meeting with anxious European leaders in neighboring Poland, Biden said the world sees through Russia's actions. He said virtually the entire world rejects the referendum in Crimea that cleared the way for Russia to annex the peninsula in Ukraine.

"The world has seen through Russia's actions and has rejected the flawed logic," Biden said.

Biden, who arrived Tuesday morning in Warsaw, said the U.S. joins Poland and the international community in condemning the continuing assault on Ukraine's sovereignty, calling it a blatant violation of international law.

The decree signed by Putin and posted on the official government website Tuesday morning is one of the steps which would formalize the annexation of Crimea. The treaty to annex Crimea has to be signed by leaders of Russia and Crimea, approved by the Constitutional Court and then must be ratified by the parliament.

Residents of Crimea voted overwhelmingly Sunday in favor of the split, and Crimea's parliament declared the region an independent state on Monday.

The Crimean parliament declared that all Ukrainian state property on the peninsula will be nationalized and become the property of the Crimean Republic. Lawmakers also asked the United Nations and other nations to recognize it and began work on setting up a central bank with $30 million in support from Russia.

Moscow showed no signs of flinching in the dispute that has roiled Ukraine since Russian troops took effective control of the strategic Black Sea peninsula last month. In fact, one of the Russians named openly mocked the sanctions.

"Comrade Obama, what should those who have neither accounts nor property abroad do? Have you not thought about it?" Deputy Prime Minister Dmitry Rogozin tweeted. "I think the decree of the President of the United States was written by some joker."

The State Duma, the lower chamber of parliament, on Tuesday unanimously passed a resolution condemning sanctions which targeted Russian officials, including members of the chamber. The chamber urged President Obama to extend the sanctions to all the 353 deputies who had voted for the resolution. Eighty-eight deputies left the house before the vote.

The sanctions freeze any assets the targeted individuals have under U.S. jurisdiction, make it illegal for Americans to do business with them and discourage international banks and financial institutions from having relationships with them, administration officials said. The officials, however, would or could not say if those targeted actually have assets in U.S. jurisdictions.

Speaking shortly after Putin signed the treaty, Hague told British lawmakers that it is regrettable that Putin is choosing a path of isolation in the annexation of Crimea and denying Russian and Crimean citizens of a partnership with the international community

He said this is not the relationship Britain wants with Russia, but one it is being forced to have.

French Foreign Minister Laurent Fabius said Tuesday that leaders of the Group of Eight world powers have suspended Russia's participation in the club amid tensions over Ukraine and Russia's incursion into Crimea.

The other seven members of the group had already suspended preparations for a G-8 summit that Russia is scheduled to host in June in Sochi.

Fox News' Greg Palkot, Reuters and The Associated Press contributed to this report.