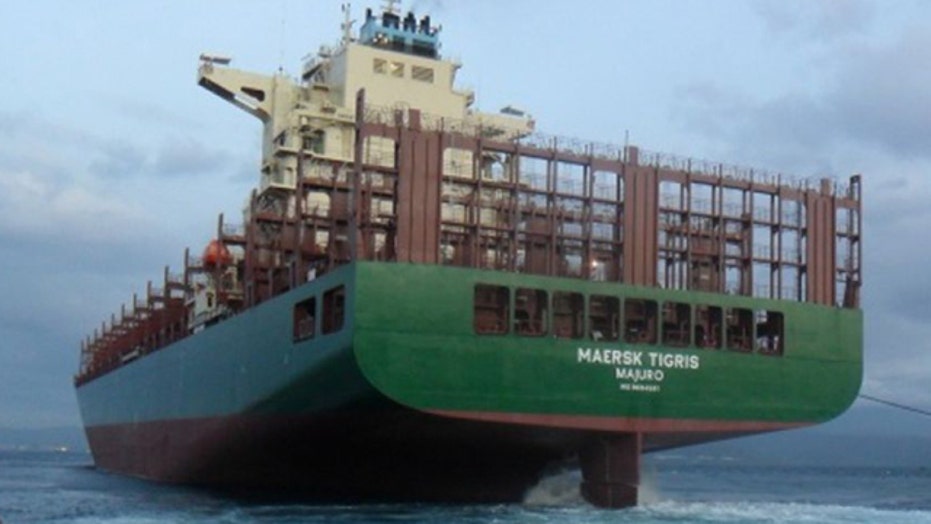 US Navy skeptical after Iran says it released cargo ship

Officials: We'll believe it when we see it

The crew of a container ship seized by Iran last month in one of the world’s major oil shipping lanes is in “good condition” after being released Thursday, the ship’s operator announced.

"Rickmers Group is pleased to report today its managed container vessel Maersk Tigris with 24 crew members on board has been officially released by Iranian authorities following an order from the court in Bandar Abbas, Iran," the company said in a statement.

Iranian forces seized the MV Maersk Tigris on April 28 after firing warning shots across its bridge as it traversed the Strait of Hormuz. It was taken to Bandar Abbas, the main port of Iran's navy, under escort by Iranian patrol boats. The seizure stems from a legal complaint by a private Iranian company.

A day after the ship was impounded, Iran's Foreign Ministry defended the move as legally valid, saying the vessel was seized based on a court decision.

Maersk said Wednesday it had agreed to pay an Iranian company $163,000 after an Iranian court ruling in February that related to a dispute about 10 container boxes transported from Iran to Dubai in 2005. The containers were transported aboard a Maersk ship, but discarded after going unclaimed for 90 days.

"Earlier, Maersk Line put up a security in relation to the underlying court case. All crew are in a good condition. The news has been conveyed to the families of the seafarers,” Rickmers Ship Management said in a statement.

The company said the ship will continue its scheduled voyage to Jebel Ali in the United Arab Emirates.

"We will be talking to the crew members individually and providing support suitable to each person's wishes and situation."

Maersk chartered the container ship from Singapore-based Rickmers Ship Management and insists it carried no "special cargo," such as military equipment.

A spokesman for the U.S. Navy's 5th Fleet told Fox News Thursday that U.S. Navy ships remain close to the Strait of Hormuz despite the termination of the mission Wednesday.

The incident came at a critical time in Iran's relations with the West, as talks on Tehran's contested nuclear program continue and frictions rise amid a U.S.-backed campaign by a Saudi-led coalition carrying out airstrikes against Iranian-backed Shiite rebels in Yemen.

Following the Maersk incident, Washington adopted a policy change, allowing any U.S.-flagged ship to be accompanied by Navy warships through the narrow strait, which includes Iranian territorial waters. Navy ships are positioned nearby and are ready to respond if needed, but they do not actually escort a vessel.

The Strait of Hormuz is the route for about a fifth of the world's oil and is only about 21 miles wide at its narrowest point.