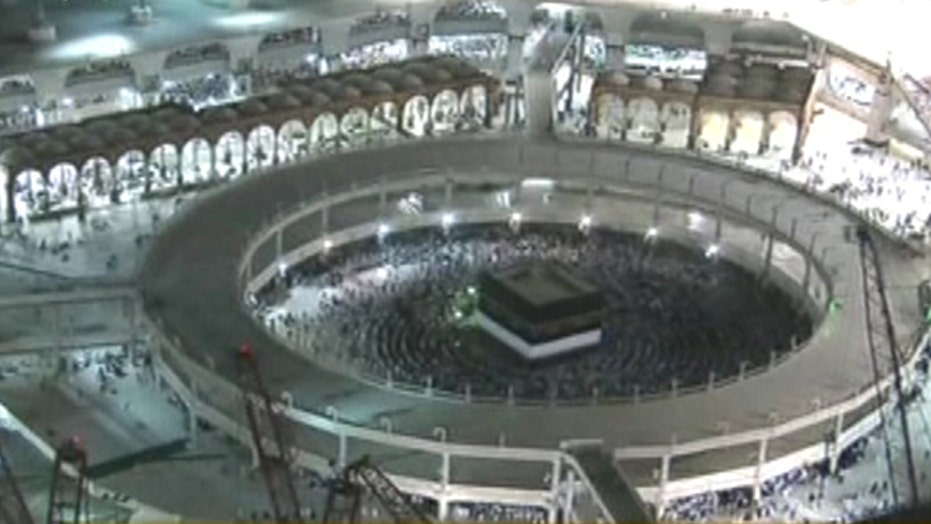 A powerful rainstorm in Mecca knocked down a crane at Saudi Arabia’s Grand Mosque Friday, and the Associated Press reported at least 107 people are dead.

Photos on social media showed shocked pilgrims in bloodied robes, and debris from part of a crane that looks like it crashed through a ceiling.

Authorities in Mecca have been preparing for the millions of faithful making the annual Muslim Hajj pilgrimage there later this month.

A photo posted online by the Defense authority showed police and workers in hard hats inspecting a pile of collapsed concrete slabs inside a part of the sprawling, ornately decorated mosque.

Authorities did not provide details on the victims' nationalities, but it was likely that the tragedy will touch several countries.

The Grand Mosque and the cube-shaped Kaaba within it draw Muslims of all types from around the world throughout the year, though numbers increase significantly in the run-up to the hajj.

Performing the pilgrimage once during one's lifetime is a duty for all able-bodied Muslims.

The Hajj is one of the largest and most famous religious gatherings in the world, but it’s been plagued by disasters in the past. Thousands of pilgrims rushing to complete rituals and return home have been trampled in the chaos. In 2006, hundreds of pilgrims died in a stampede.

Last year, the Saudi government reduced the numbers allowed to perform hajj for safety reasons because of construction work to expand the Grand Mosque. Security services often surround Islam's sacred city with checkpoints and other measures to prevent people arriving for the pilgrimage without authorization.

Western Saudi Arabia has been clobbered with strong sand storms in recent days. A heavy sandstorm that swept across parts of the Middle East Tuesday killed two people and injured hundreds in Lebanon. Clouds of dust also engulfed Israel, Jordan and Cyprus.