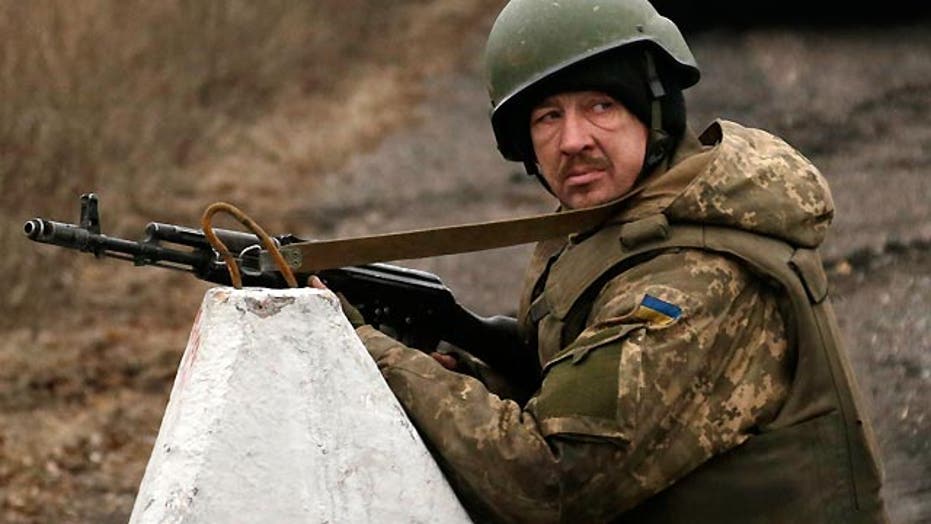 Ceasefire appears to be failing in Ukraine

Rebel fighters, many of them Cossacks, roamed the streets of Debaltseve on Thursday, a day after Ukrainian forces began withdrawing from the besieged city, with some fearing “capture or death” if they remained.

One lieutenant told The Wall Street Journal that he had led his company of 50 men on a 14-mile overnight march to safety early Wednesday after undergoing several days of bombardment.

The shelling began early Sunday, just hours after a cease-fire deal agreed by the leaders of Russia, Ukraine, Germany, and France was due to take effect. The separatists repeatedly claimed that the cease-fire did not apply to the area around Debaltseve because they already had the city surrounded and considered it theirs.

"If you stay there, it is capture or death," the lieutenant, identified as Yuriy Brekharya, told the newspaper. "The decision to leave came to everyone at the same time."

Associated Press journalists who drove around about half of the city Thursday found all neighborhoods under the control of rebel fighters, most of them appearing to be Cossacks.

Nikolai Kozitsyn, a Russian Cossack leader who has been a prominent warlord in separatist eastern Ukraine, drove around in a Humvee-like vehicle that had been captured from Ukrainian troops. Other rebels were seen waving separatist flags, laughing and hugging each other and posing for photos.

But in a reminder of the dangers of the area, one car carrying Cossacks hit a land mine 200 yards from the AP journalists, killing one Cossack and injuring one other.

A Ukrainian military spokesman said Thursday that more than 90 percent of its forces have been withdrawn from Debaltseve and its surroundings, but left unclear when the retreat might be completed.

Control of the town is a significant strategic gain for the rebels because it's a railway junction that straddles the most direct route between Donetsk and Luhansk, the separatist region's two main cities.

Russian television ran footage of rebels raising the flag of Novorossiya, as they call their nominal republic, over a building in the city, and images of several dozen captured Ukrainian troops being escorted along a village road by the rebels.

President Petro Poroshenko sought to portray the fall of Debaltseve in a positive light, saying the pullback was carried out "in a planned and organized manner," despite assertions by the exhausted and dirt-caked soldiers that their forces had suffered heavy losses.

"Debaltseve was under our control, it was never encircled," Poroshenko asserted. "Our troops and formations have left in an organized and planned manner ... The Ukrainian troops ... gave a blow in the teeth to those who were trying to encircle them," he said Wednesday at a Kiev airport before flying to eastern Ukraine to "shake the hands" of the soldiers leaving Debaltseve.

Lt. Brekharya told The Wall Street Journal that by the time he decided to retreat, his men had lost contact with their superior officers, were running out of ammunition, and had only one armored vehicle left. When that was destroyed by shelling Tuesday, Brekharya asked a fellow officer for help and was told "Buddy, I've got nothing to help you with."

In Paris, French President Francois Hollande said he and German Chancellor Angela Merkel spoke Thursday with the leaders of Ukraine and Russia about cease-fire violations and their consequences. He did not elaborate.

The Kremlin confirmed that the four leaders had spoken by phone and praised the cease-fire deal, saying it has led to "a reduction in the number of civilian casualties."

The leaders "emphasized the necessity of ensuring the sustainability of the cease-fire," the Kremlin said, urging both sides to withdraw heavy weapons and release all prisoners. It said the foreign ministers of the four countries would get in contact to talk more about implementing the Minsk peace deal for eastern Ukraine.

A top European Union official said the 28-member bloc will provide armored cars and satellite imagery to monitor a cease-fire in Ukraine but is undecided whether to commit troops to a proposed U.N.-mandated peacekeeping mission.

Poroshenko told a late night meeting of his national security council to consider asking for the U.N. peacekeeping mission, a move he has previously opposed, apparently fearing they would include troops from Russia or its client states. The new proposal suggests a mission be made up of security forces from European Union countries. Russia, as a permanent member of the U.N. Security Council, has the power to veto any peacekeeping mission.

Maciej Popowski, deputy secretary general for EU's External Action Service, said Thursday the EU "there needs to be more clarity" on the proposal by Poroshenko before deciding on sending troops to Ukraine.

France's Defense Minister Jean-Yves Le Drian said separately the Organization for Security and Co-operation in Europe would be sending some 400 ceasefire observers to Ukraine. The EU and NATO have urged the pro-Russia separatists to allow OSCE observes to monitor the shaky cease-fire deal.

Lt. Brekharya claimed that the shelling in the latest offensive against Debaltseve, which began on Jan. 20, was being carried out by professional Russian soldiers. Russia has repeatedly denied arming and training the rebels and claimed that Russians who have turned up fighting alongside the rebels are volunteers whose actions are beyond Moscow's control.

Brekharya also claimed that supplies were irregular and he received orders from his superior officers to hold the line instead of either attacking or retreating long after the position of his unit had become untenable due to Russian attacks.

The Washington Post reported widespread frustration with commanders, as well as, in at least one case, outright cowardice. One government battalion commander reportedly abandoned his troops last week, only to be blown up by a roadside bomb as he fled.

"We left everything in Debaltseve. We just came out with the clothes on our backs,” Ilya Andrushko of the Lviv battalion said.

"Our commanders abandoned us. And the Ukrainian media were repeating what they were saying in Kiev — that we had everything, that we weren’t surrounded. It was all lies," sniper Volodymyr Trukhan said.

Semyon Semenchenko, a battalion commander and a member of parliament, accused the military command of betraying the country's interests in Debaltseve.

"We had enough forces and means," he said in a Facebook post. "The problem is the command and coordination. They are as bad as can be."

Semenchenko's words cut hard because he became well-known during another major rebel rout of Ukrainian forces in the battle for Ilovaysk last summer. Semenchenko, who was wounded in the fighting, was critical of the government for allegedly abandoning volunteer troops there.