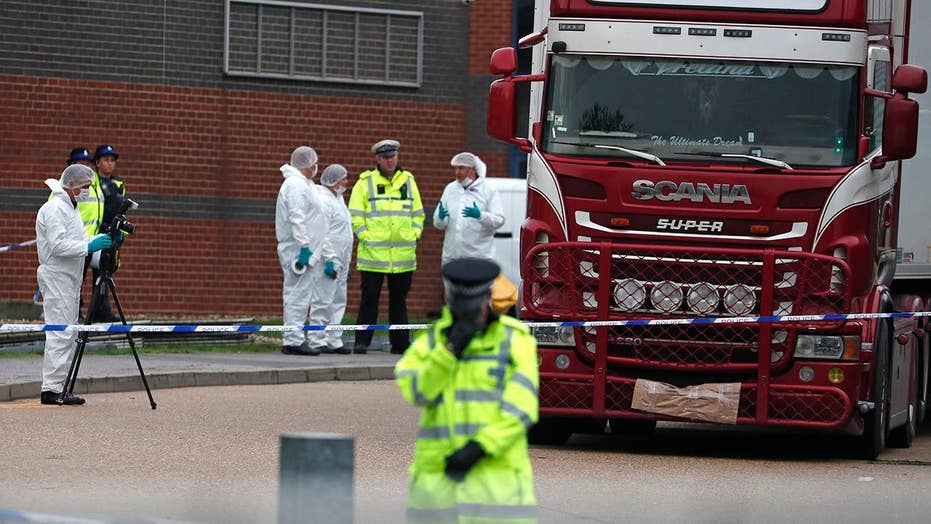 39 people found dead in UK truck were from China

Investigators believe the Chinese nationals froze to death in the truck's refrigerated trailer in a human smuggling operation.

The 39 people who were found dead inside the back of a semi-truck near an English port were identified Thursday as being Chinese citizens, British police confirmed.

Essex Police said 31 men and 8 women were found dead inside the truck container Wednesday at the Waterglade Industrial Park in Grays, a town about 25 miles east of London.

Additional details about the victims were not released, though police said the one victim previously thought to be a teenager was instead a young adult woman.

Floral tributes at the Waterglade Industrial Park in Thurrock, Essex, England Thursday the day after 39 bodies were found inside a truck on the industrial estate. British media are reporting that the 39 people found dead in the back of a truck in southeastern England were Chinese citizens. (PA via AP)

“Each of the 39 people must undergo a full coroner’s process to establish a cause of death, before we move on to attempting to identify each individual within the trailer,” Essex police said in a statement on its website. “This will be a substantial operation and, at this stage, we cannot estimate how long these procedures will take.”

The Chinese Foreign Ministry posted a statement on social media saying that Chinese embassy employees in the U.K. were driving to Essex to aid in the investigation.

The truck’s driver, a 25-year-old man from Northern Ireland, was detained on suspicion of murder.

Police escort the truck, that was found to contain a large number of dead bodies, as they move it from an industrial estate in Thurrock, south England, Wednesday. (AP)

Police have not identified the driver, however, several U.K. media outlets -- citing local elected officials -- have named him as Mo Robinson, from Portadown, County Armagh. A Facebook page with his name identifies him as a lorry driver.

“We want to be clear – we have not speculated about the identity of this man, and we will not do so,” police said.

Authorities are diligently working to piece together how the Chinese nationals ended up in the back of the truck and trafficked into the U.K. The New York Times reported that investigators are looking into a possible human trafficking link to how the migrants ended up near the English port.

Essex police said the truck and trailer with the people inside apparently took separate journeys before ending up at the industrial park. They said they believe the container went from the port in Zeebrugge in Belgium via ferry to Purfleet, England, where it arrived early Wednesday.

Where it was before then remains unclear.

Police forensic officers attend the scene after a truck was found to contain a large number of dead bodies, in Thurrock, South England, Wednesday Oct. 23, 2019. Police in southeastern England said that 39 people were found dead Wednesday inside a truck container believed to have come from Bulgaria. (AP)

As for the tractor unit of the lorry – the smaller section at the front of the vehicle – police said it began its journey to Grays in Northern Ireland, where it made its way to Dublin. There it caught a ferry to Holyhead in north Wales before making its way Essex to pick up the container around 12:30 a.m. Wednesday in Thurrock, Sky News reported.

It departed the dock around 1:05 a.m. and CCTV footage shows the full vehicle being driven toward the industrial part just minutes before the bodies were found inside.

The truck has been removed from the industrial park to allow for the next stage of the investigation.

“We will continue to work with partners and other law enforcement agencies to establish exactly how these 39 people lost their lives in such an untimely way,” police said. “This process will be complex and lengthy, as well as incredibly challenging for all those involved, but we will not stop until we get answers for the loved ones of those who have sadly died.”

Britain remains an attractive destination for immigrants, even as the U.K. is negotiating its divorce from the European Union. Upon hearing of the deaths, British Prime Minister Boris Johnson vowed in Parliament on Wednesday that people smugglers would be prosecuted to the full extent of the law.

The tragedy recalls the deaths of 58 people in 2000 in a truck in Dover, England, who had undertaken a perilous, months-long journey from China's southern Fujian province and were discovered stowed away with a cargo of tomatoes after a ferry ride from Zeebrugge, the same Belgian port used in the latest tragedy.

Police escort the truck, that was found to contain a large number of dead bodies, as they move it from an industrial estate in Thurrock, south England, Wednesday Oct. 23, 2019.  (AP)

Authorities have warned for several years that people smugglers are turning to Dutch and Belgian ports because of increased security on the busiest trade route between Calais in France and Dover in England.

Britain's National Crime Agency warned in 2016 that people smuggling using containers on ferries was "the highest-priority organized immigration crime threat." The same year, the U.K. Border Force identified Zeebrugge and the Hook of Holland in the Netherlands as key launching points for people trafficking into Britain.