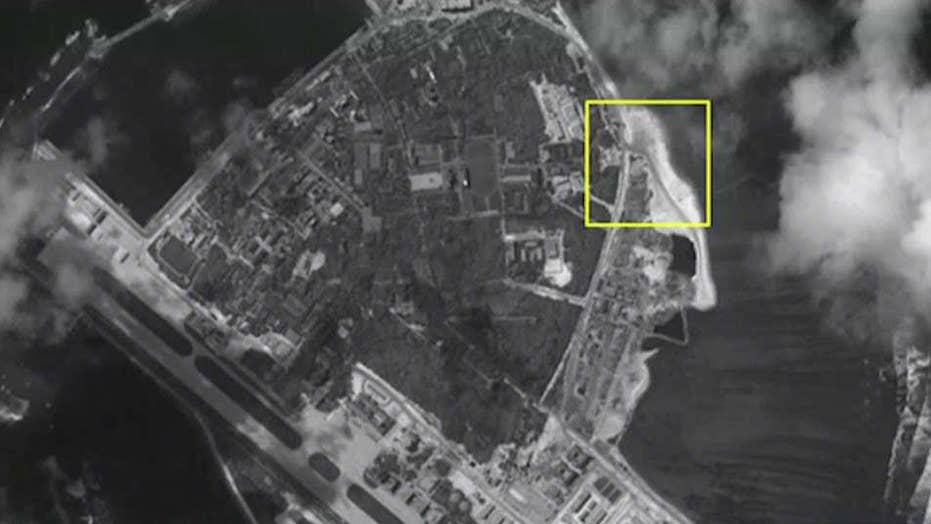 China's missile deployment ignites war of words with US

China apparently has been building radar faciltiies on some of the artificial islands it constructed in the South China Sea in a move to bolster its military power in the region, according to a report released Tuesday by a U.S.-based think tank.

The Center for Strategic and International Studies (CSIS) says the radars on the outposts of Gaven, Hughes, Johnson South and Cuarteron reefs in the disputed Spratly Islands "speak to a long-term anti-access strategy by China—one that would see it establish effective control over the sea and airspace throughout the South China Sea."

The report cited satellite images taken between late January and mid-February of this year that appear to show radar towers on four artificial islands in the Spratlys.

The report was released one week after Fox News reported that China had deployed an advanced surface-to-air missile system as well as a radar system on Woody Island, part of the Paracel Island chain located north of the Spratlys.

The release of the report also coincides with the first day of a three-day visit to the U.S. by Chinese Foreign Minister Wang Yi, during which the issue of competing South China Sea claims is expected to be discussed, as well as North Korea's latest nuclear test.

China has been building islands on top of reefs and atolls it controls, then adding air strips, harbors and other infrastructure that would help consolidate its control. Five other governments also hold maritime claims that overlap with Beijing's, and the U.S. has said it is concerned about China's militarization of the area.

The Obama administration is under congressional pressure to step up the U.S. response to China's actions. Lawmakers are expected to raise their concerns at a Senate Armed Services Committee hearing Tuesday with the commander of U.S. forces in the Pacific.

State Department spokesman Mark Toner said Monday that the U.S. would continue to press China to stop its militarization in the South China Sea. He called for a diplomatic process to settle territorial claims peacefully.

A couple of U.S. Navy operations close to disputed land since October have already riled Beijing, which claims that U.S. "reconnaissance" is responsible for stoking tensions in a region where Washington is not a claimant.

In an editorial Tuesday, China's official Xinhua News Agency said divisions over Korea and the South China Sea had been "amplified thanks partly to Washington's hidden agendas and recklessness."

"It is also noteworthy that it is Washington that is fanning up the flames by flexing its muscles in the South China Sea and by emboldening nations in their territorial disputes with China," the editorial said.

On Monday, Chinese Foreign Ministry spokeswoman Hua Chunying restated Beijing's position that the Spratly Islands are "indisputably China’s territory" and claimed "necessary and limited deployment of defensive facilities is the exercise of China’s self-preservation rights, which are granted by international law."

"The deployment of defense facilities on China's own territory," Hua said, "is no different from what U.S. does in Hawaii."