The social media giants say hundreds of fake accounts are linked to a state-backed operation to sow chaos in Hong Kong and beyond.

A new study by a think tank warns the U.S. has lost its military supremacy in the Indo-Pacific region, with China being able to launch and win a military conflict even before American forces are able to respond.

The University of Sydney's United States Study Center released a study on Friday detailing the profound changes it claims is happening in the region, paving way for China to exert more influence.

The report, titled “Averting Crisis: American strategy, military spending and collective defence in the Indo-Pacific,” claims that “America no longer enjoys military primacy in the Indo-Pacific and its capacity to uphold a favorable balance of power is increasingly uncertain.”

“America no longer enjoys military primacy in the Indo-Pacific and its capacity to uphold a favorable balance of power is increasingly uncertain.”

The researchers found that although the U.S. military is still perceived as a force to be reckoned with globally, the “combined effect of ongoing wars in the Middle East, budget austerity, underinvestment in advanced military capabilities and the scale of America's liberal order-building agenda has left the U.S. armed forces ill-prepared for great power competition in the Indo-Pacific.”

More alarmingly, the report warns that China would be able to use the U.S. military’s lack of reach in the region to launch a military attack against America’s regional allies and achieve victory even before the U.S. responds, Newsweek reported.

FILE - In this June 29. 2019, file photo, President Donald Trump, left, meets with Chinese President Xi Jinping during a meeting on the sidelines of the G-20 summit in Osaka, Japan.  (AP Photo/Susan Walsh, File)

“Having studied the American way of war — premised on power projection and all-domain military dominance — China has deployed a formidable array of precision missiles and other counter-intervention systems to undercut America's military primacy,” the report said.

NEWT GINGRICH: US MUST STAND WITH PEOPLE OF HONG KONG FIGHTING FOR FREEDOM

“By making it difficult for US forces to operate within range of these weapons, Beijing could quickly use limited force to achieve a fait accompli victory — particularly around Taiwan, the Japanese archipelago or maritime Southeast Asia — before America can respond, sowing doubt about Washington's security guarantees in the process.”

“By making it difficult for US forces to operate within range of these weapons, Beijing could quickly use limited force to achieve a fait accompli victory ... before America can respond, sowing doubt about Washington's security guarantees in the process.”

The report comes amid heightened tensions between Washington and Beijing. While the two countries have repeatedly clashed over trade, with President Trump criticizing the Chinese government over policies that he claims hurt the American economy, the U.S. military cautioned China earlier this year over the islands claimed by China in the disputed South China Sea.

Two U.S. warships sailed near islands claimed by China back in May, while two American nuclear-capable B-52H flew over the South China Sea at least twice in March.

US WARSHIPS SAIL NEAR DISPUTED ISLANDS CLAIMED BY CHINA, AS TENSIONS ESCALATE: REPORT 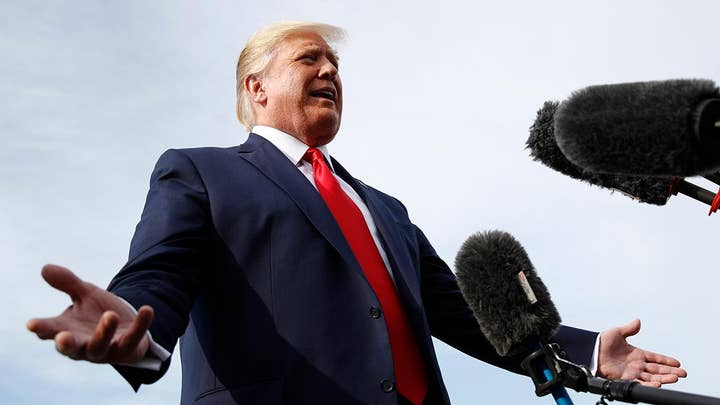 The South China Sea has been the site of ongoing tension, primarily between the U.S. and China, which claims nearly all of the strategic waters despite competing claims from other Southeast Asian nations.

But as the U.S. and China engage in more symbolic military moves, the Friday’s study claims the Chinese military could launch a “limited war” to retake Taiwan or fully take control of the disputed islands using not only conventional capabilities but cyber and political weapons as well.

“In all these scenarios, Beijing's aim would be to strike first to secure longstanding political goals or strategically valuable objectives before the United States can do anything to stop it,” the report said.