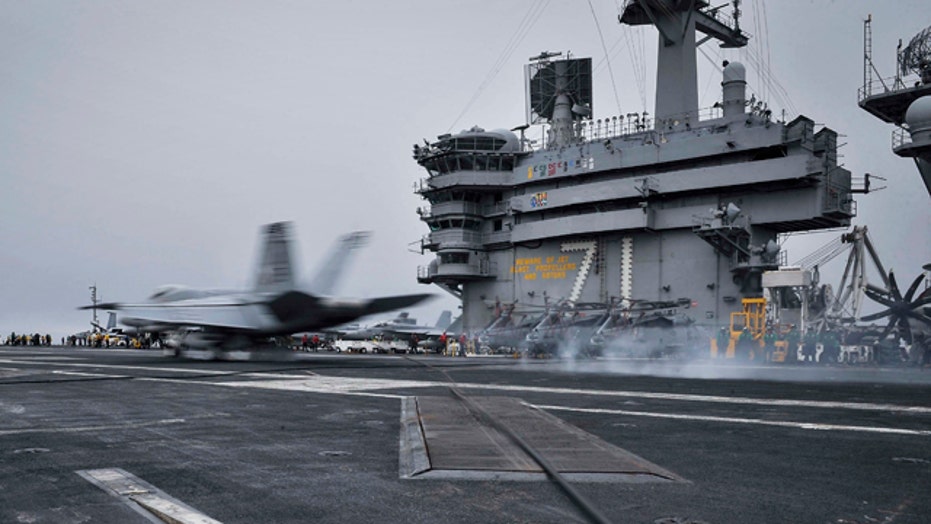 Iranian convoy turns away from Yemen amid the presence of U.S. Navy

Iranian-backed Houthis fighting for control of Yemen are swelling their rebel army with children as young as 6, giving them food, a few dollars a day and the grim warning that “there is no going home to Mommy and Daddy,” according to human rights advocates.

“The Houthis are wooing the children with food, because everyone is starving."

As the gulf nation continues its descent into full-blown civil war, with Iran backing the rebels and a Saudi-led coalition supporting President Abd Rabbuh Mansur Hadi, the Houthis are increasingly desperate to bolster their army. Orphans, teens recruited from bazaars and even young children forced into conscription now form as much as 40 percent of the rebel army’s ranks, according to experts.

“These are young, enthusiastic—because they are too young to know what war is—young men from poor families who are happy to receive a uniform and an AK47 and to be formally treated like men,” Hisham al-Omeisy, a political activist based in Sanaa said in an interview with Fox News.

In many cases, poor families are all too happy to send their children off to fight, al-Omeisy said.

Rough estimates put the total number of Houthi fighters between 20,000 and 30,000, of which 30 to 40 percent are under 18 and almost a quarter under 16, al-Omeisy said, although given the difficulty in obtaining access and the dangerous security situation, it is nearly impossible for activists and rights groups to be exact on the number of children involved.

A United Nations report found the Houthis took in child soldiers as young as 6. The children can earn up to $100 a month, lucrative pay in a land where the poor subsist on just $2 a day. They also get a warm meal, which according to activists is enough of a draw for many young boys to leave school and joined armed groups.

In return, they are positioned at checkpoints and embedded in areas newly seized by Houthi forces.

“The Houthis are wooing the children with food, because everyone is starving,” said Mohammad, an internal medicine physician from Taiz who asked to remain anonymous.

As Mohammad spoke, the sound of Houthi tanks and mortar could be heard over the phone. The attack came even as a fragile international cease fire was supposedly in place.

“There is an ‘aerial ceasefire,’ but that doesn’t mean Houthis can’t make their moves with tanks,” he said.

Mohammad said he fears for the rebels’ youngest soldiers, who are cruelly lured or forced into a dead-end duty.

“They are taught to either reach victory or die,” he said. “There is no going home to Mommy and Daddy.”

The official minimum age for joining the army is 18, but bribing families with food and pay allows both the government and the Houthis to recruit much younger boys. The use of children has more to do with population demographics than strategy, according to al-Omeisy, who noted almost half of Yemen’s population is under age 14.

Before the Houthis were recruiting children, other groups including Al Qaeda of the Arabian Peninsula, its affiliate Ansar al Sharia and even the Yemeni army were employing them.

In 2011, child soldiers were recruited by the Yemeni Armed Forces to confront the Houthis in the north during Yemen’s ‘Arab Spring’ uprising against former President Ali Abdullah Saleh, who was forced from office after 33 years under threat of prosecution and replaced by Hadi.

The Houthis, a Shia Muslim group loyal to Saleh, drove Hadi from his palace and seized control of Sanaa in January. Hadi is now in Saudi Arabia, which is seeking to restore his administration and, as Sunnis, does not want Iran to expand influence in the region.

Last May, Yemen’s government signed a plan put forth by the U.N to stop the recruitment of children by the country’s army. This would put Yemen on international law standards, which prohibit the use of child soldiers, according to Human Rights Watch.