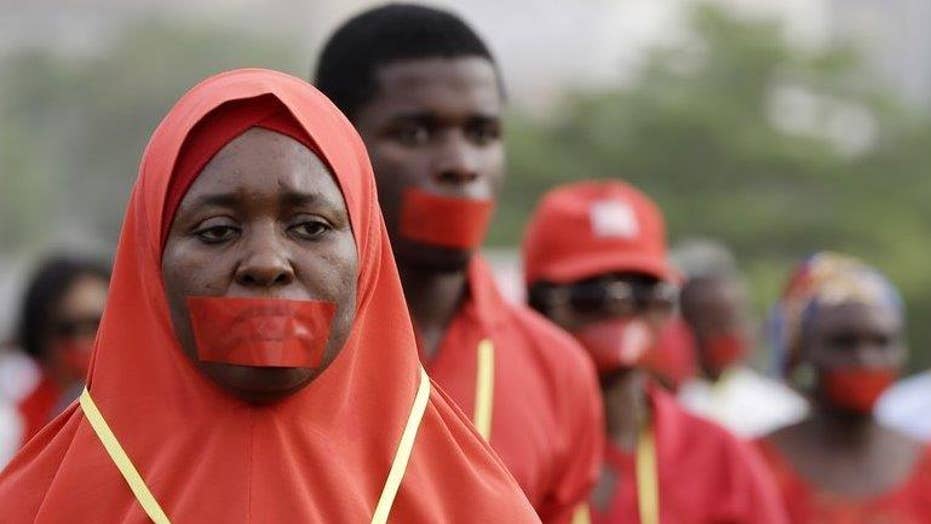 Family member says the girl was found wandering the forest, pregnant and traumatized

Nigerian hunters have rescued the first of the 219 schoolgirls who were kidnapped by Boko Haram extremists in 2014, and she is traumatized but otherwise fine, her uncle says.

The hunters found the young woman, Amina Ali Nkeki, and a baby wandering near the Sambisa Forest, The Associated Press reported.

The young woman told her mother that some of the Chibok girls have died in captivity and the others still are held by Boko Haram, according to family's doctor, Idriss Danladi, who spoke to The Associated Press after a conversation with the mother.

Nigeria's military tried to claim her rescue. "This is to confirm that one of the abducted Chibok school girls ... was among the rescued persons by our troops," said a one-line statement from army spokesman Col. Sani Kukasheka Usman.

Hunters took the 19-year-old — she was 17 when abducted — to her home village of Mbalala, near Chibok, on Tuesday and she reunited with her mother, Danladi said. Her father died while she was held captive, said her uncle Yakubu Nkeki. Mother, daughter and baby have been taken to a military camp in the town of Damboa.

The girl's mother tried to commit suicide some months after her daughter was seized, said Danladi, who is from Chibok and has treated several of the parents. He said the mother "suffered a huge traumatic disorder ... I had to convince her that she just has to stay alive if she really wants her daughter returned home safe and sound."

At least 16 of the girls' parents have died since the kidnapping, he said. Others have ailments they blame on their ongoing trauma.

"I suffered a stroke on Friday, that's why you don't recognize my voice," said the Rev. Enoch Mark, whose two daughters are among the missing girls. He said the escape of the first Chibok girl brings renewed hope.

"I believe that, by the grace of God, our daughters, some of them, will be found if they are still alive."

Activists told the BBC that the girl was identified by a civilian who was part of a vigilante group set up to help fight Boko Haram. She is expected to be transported soon to Maiduguri, the capital of the Borno State.

Other Chibok girls may also have been rescued by soldiers hunting down Boko Haram in the remote northeastern Sambisa Forest on Tuesday night, said Chibok community leader Pogu Bitrus. He said he is working with officials to establish their identities.

A social media campaign using the hashtag #BringBackOurGirls reached to the White House years ago, where U.S. first lady Michelle Obama promised her husband would do all in his power to help. "Our prayers are with the missing Nigerian girls and their families. It's time to #BringBackOurGirls," she tweeted in May 2014.

"God reigns!" one of the founders of the Bring Back Our Girls movement, Oby Ezekwesili, trumpeted on social media Wednesday. "OUR #ChibokGirl ... IS BACK!!!!!!! #218ShallBeBack because #HopeEndures."

Nigerian media have been reporting in recent days that the country’s army launched a number of operations against Boko Haram in the Sambisa Forest, but authorities would not yet comment, the BBC reports.

Boko Haram Islamic extremists stormed and firebombed the Government Girls Secondary School at Chibok on April 14, 2014, and seized 276 girls who were preparing to write science exams. Dozens escaped in the first hours, but 219 remained missing.

The inability of Nigeria's government and military to rescue them led, in part, to the electoral defeat of President Goodluck Jonathan last year.

It's not known how many thousands of girls, boys and young women have been kidnapped by Boko Haram in a nearly 7-year-old insurgency that has killed some 20,000 people and spread across Nigeria's borders.

Nigeria's military has reported freeing thousands this year as they have forced the extremists from towns and into strongholds in the sprawling Sambisa Forest. Boko Haram has turned to soft targets using suicide bombers.