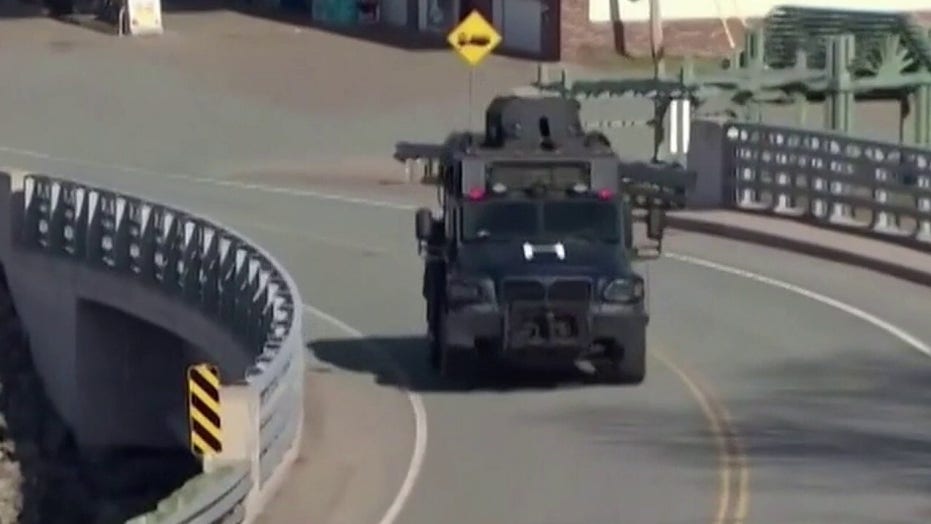 At least 10 killed in Canada rampage

Jon Scott on the Canada rampage that left at least 10 people dead.

A horrific shooting rampage Sunday in Nova Scotia, Canada, killed at least 16 people including a policewoman, investigators said, in the deadliest attack of its kind inside that country in history.

The lone gunman was also dead. He had "moved across the northern part of the province and committed what appears to be several homicides," Royal Canadian Mounted Police [RCMP] Chief Superintendent Chris Leather said.

A possible motive was unclear; police said many of his victims did not know the killer. At one point, he apparently disguised himself as a police officer, investigators added. Several bodies turned up inside and outside a home in the town of Portapique, which police called the first crime scene.

Royal Canadian Mounted Police officers prepare to take a suspect into custody at a gas station in Enfield, Nova Scotia on Sunday April 19, 2020. Canadian police arrested a suspect in an active shooter investigation after earlier saying he may have been driving a vehicle resembling a police car and wearing a police uniform. (Tim Krochak/The Canadian Press via AP)

Among the victims, at least one officer died and another suffered injuries, according to Brian Sauvé, the president of the National Police Federation union. The dead officer was identified as Constable Heidi Stevenson, a mother of two and a 23-year veteran of the force.

Investigators said earlier that they took the suspect into custody before later adding that he died. They did not give specifics.

An initial tweet around midnight from police asked people to avoid the Portapique area and stay indoors as officers responded to a firearms complaint.

About three hours later, police tweeted that the suspect had been taken into custody at a gas station in Enfield, Nova Scotia.

Royal Canadian Mounted Police officers prepare to take a person into custody at a gas station in Enfield, Nova Scotia on Sunday April 19, 2020. A suspect in an active shooter investigation is in custody in Nova Scotia, with police saying several people were harmed before a man wearing police clothing was arrested. (Tim Krochak/The Canadian Press via AP)

"My heart goes out to everyone affected in what is a terrible situation," Prime Minister Justin Trudeau said.

“I never imagined when I went to bed last night that I would wake up to the horrific news that an active shooter was on the loose in Nova Scotia,″ Premier Stephen McNeil said. “This is one of the most senseless acts of violence in our province’s history.”

He added that it was an additional “heavy burden” amid efforts to contain the coronavirus.

As police were seeking the suspect, they tweeted that he may have been driving what appeared to be an RCMP vehicle and wearing an RCMP uniform. Police said he was not a mountie.

Tom Taggart, a lawmaker in the municipality of Colchester, said the shooting shook the otherwise quiet community.

"This is just an absolutely wonderful, peaceful quiet community and the idea that this could happen in our community is unbelievable," Taggart said by phone from his home in Bass River, near the lockdown area.

"People live here because of the peace and quiet and it's just an absolute tragedy," he added.

Taggart said he didn't know the suspect well, but spoke to him a few times when he called about municipal issues.