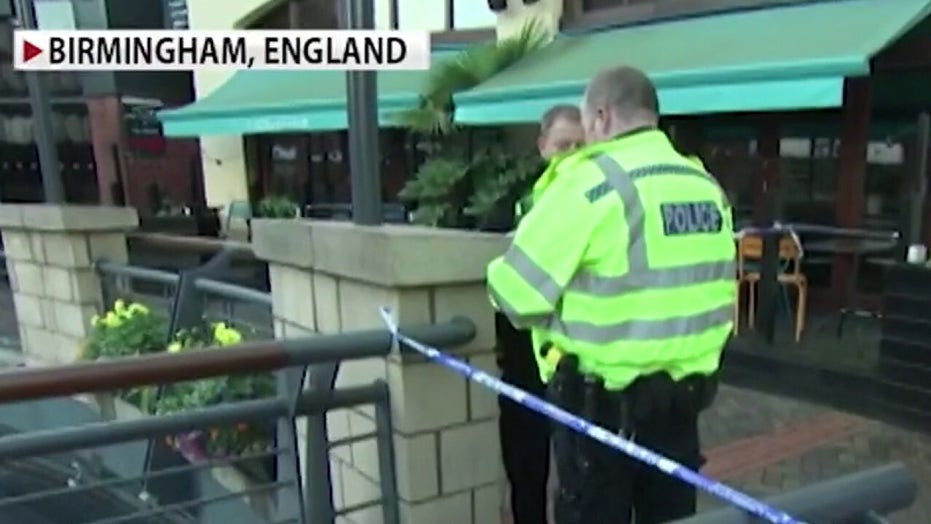 Manhunt for lone suspect in UK stabbings after 1 killed, 7 injured in Birmingham

Police in England are searching for a lone suspect after a series of late-night stabbings in the city of Birmingham left one man dead and seven others injured, police said.

British investigators announced the arrest Monday of a 27-year-old man following a stabbing spree in the city of Birmingham that left one person dead and two more in critical condition.

The suspect, who has not been identified by West Midlands Police, is being held on one count of suspicion of murder and seven counts of attempted murder stemming from the incidents that unfolded early Sunday morning in which the victims appeared to have been targeted at random.

"To think that people going about enjoying their evening out were attacked by what appears to be a lone knifeman is truly dreadful,” West Midlands Police and Crime Commissioner David Jamieson told Sky News. "Our thoughts must be with the family of the deceased man and those who are still in hospital recovering from their injuries."

POLICE: ‘NO SUGGESTION’ THAT STABBINGS ARE TERROR-RELATED

Police say a 23-year-old man suffered fatal injuries in one of the attacks, while another man and a woman, ages 19 and 32, are hospitalized in critical condition.

The stabbings also injured five other people between the ages of 23 and 33, according to West Midlands Police.

“Officers worked through yesterday and into the early hours of this morning in a bid to trace the man we believe responsible for these terrible crimes,” Birmingham Police Commander, Chief Superintendent Steve Graham said in a statement. “We issued CCTV footage of the suspect and had a strong response from the public.”

A police forensics officer taking photographs in Birmingham after several people were stabbed in the city center on Sunday. (AP/PA)

The suspect was taken into custody in Birmingham early Monday morning.

But the Associated Press says local police have faced criticism of their response to the attacks, notably how the attacker was able to wander the city during his 90-minute rampage.

The stabbings took place at a time when nightlife is gradually resuming across city centers in the United Kingdom following the national coronavirus lockdown.

Police forensic officers investigate one of the stabbing scenes. (AP/PA)

Official statistics show knife crime is on the rise in the U.K., where most guns are outlawed, although the number of homicides with blades fell in 2019 from the year before.

Britain also has seen several recent extremist knife attacks, including a stabbing rampage in a city park in Reading, near London, in June that killed three people. A Libyan man has been charged.