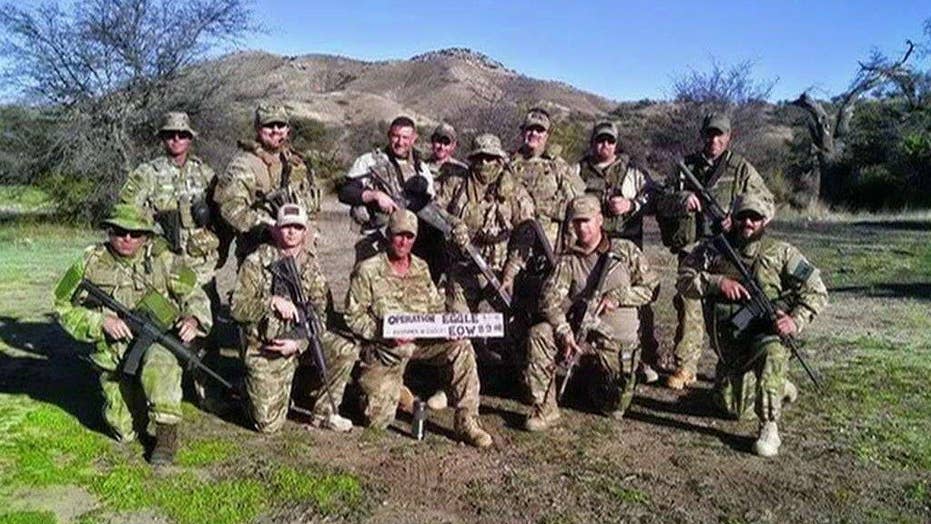 Members are armed and ready for protection

A brigade of veterans, former law enforcement, and private security personnel is patrolling the U.S. southern border with a renewed mission to protect the homeland from potential ISIS terrorists.

The Arizona Border Recon was formed in 2011 to help stop the flow of undocumented migrants and illegal goods crossing the border. It is made up of heavily armed men that patrol a 600 square-mile area on the Arizona-Mexico border.

Given the increasing threat from ISIS terrorists, the group is now worried that a potential terrorist could easily infiltrate the border. Tim 'Nailer' Foley, the 56-year-old founder of the group, says his hidden cameras have caught 'Middle Eastern guys with beards.'

"A couple weeks ago, 10 miles to the west of us, they got five Pakistanis and an Afghani trying to get through the border and they got caught," said Foley, a veteran and head of field operations for the group, referencing a report confirmed by the FBI. "On trail cameras, we've seen Somali and Sudanese – everybody and their brother is coming though that border."

The group says on its website that it is not affiliated with the government and is not a militia. It claims to have detained hundreds of undocumented immigrants, drug mules and cartel scouts. Foley told the Washington Post that his group has saved more than 100 people as well.

"Our objective is not to overthrow any government, or take the law into our own hands. We are not here to replace the Border Patrol,” the group proclaims. “We operate within the scope of the law as citizens, by observing and reporting what we see."

The renewed focus on protecting the border from potential ISIS terrorists comes after the Paris attacks killed 130 people, and as the United States debates whether it should accept Syrian refugees. Reports of Syrians traveling with fake documents through Central America have only strengthened Foley's assertion that the border can and will be used by potential terrorists.

The Arizona Border Recon, however, has been categorized by the Southern Poverty Law Center as of a few dozen "Nativist Extremist" groups, or "anti-immigration organizations that go beyond mere advocacy to confront suspected undocumented immigrants and those who hire or help them," according to the legal advocacy group, which said such groups reached their "vitriolic peak in 2010."

Foley and his brothers in arms deny the SPLC's claim that they are an extremist group. Foley says his men go through background checks and follow strict rules of engagement.

"If getting off the couch and doing something to help protect your country is extreme then yeah I guess you can call us extremists because we are not going to sit on the couch," Foley said.

"We are not against immigration we just want it done the right way, because your friends wouldn't climb through your back window to come visit you. If you come through the front door that's fine but we don't know who is who."