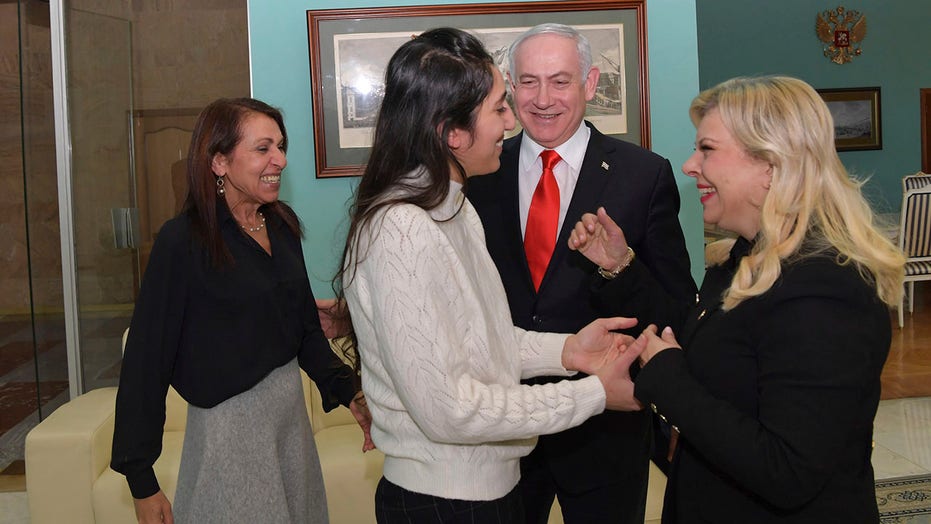 An American-born Israeli woman, who was detained in a Russian prison on drug charges for nearly a year, reunited with her mother in Moscow on Thursday after a pardon from President Vladimir Putin granted her release.

Naama Issachar, 26, was sentenced to 7 1/2 years in prison after Russian authorities alleged more than nine grams of hashish were found in her luggage at a Moscow airport in April 2019.

"Finally, thank God, thanks to everyone," said her mother, Yaffa, according to the BBC.

Netanyahu thanked his “friend” Putin for pardoning Issachar. He and his wife Sara met with Issachar and her mother in Moscow during his visit.

He tweeted the message: "Naama, we're going home," along with a video of the meeting. Issachar and her mother later left for Israel aboard the prime minister’s plane.

Issachar and her mother departed aboard the prime minister's plane after the meeting. (Kobi Gideon, GPO via AP)

Issachar, who was born and raised in Fair Lawn, N.J., and moved to Israel when she was 16, was detained while transferring at a Moscow airport en route from India to Israel.

Issachar said she accidentally left the cannabis in her bag, her sister, Liad Gold, previously told Fox News. Issachar was initially charged with cannabis possession, but the charge was upgraded in May to smuggling drugs into Russia.

She had been serving her sentence in a prison colony just outside Moscow.

The Israeli media also alleged Issachar's arrest was being used as a bargaining chip over the jailing of a Russian man, Alexei Burkov, who was arrested in Israel for involvement in an alleged $20 million credit card fraud scheme. Russian officials never linked the issues.

Burkov was extradited to the U.S. in November on an Israeli court order.