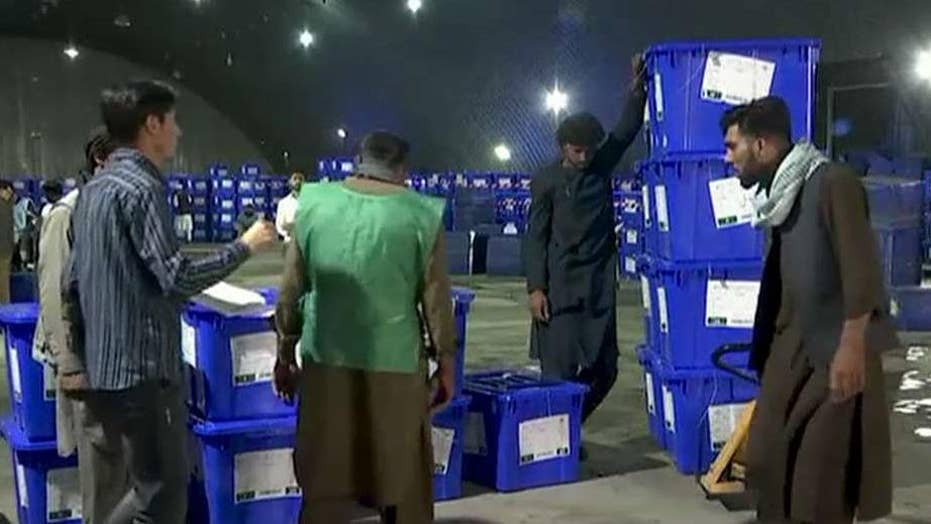 Security is tight as Afghans head to the polls for their presidential election; Benjamin Hall reports.

The Taliban staged attacks Saturday as war-weary voters in Afghanistan trekked to the polls in low numbers to elect a new president.

Agence France-Presse quoted a security official as saying that two civilians had been killed and 27 wounded in Taliban bombings and mortar attacks at polling centers across the country.

President Ashraf Ghani, who is seeking re-election, said after voting at a Kabul high school that the most important issue was finding a leader with a mandate to bring peace to the war-torn nation, according to AFP.

"Our roadmap (for peace) is ready, I want the people to give us permission and legitimacy so that we pursue peace," said Ghani.

Afghan women wait for the a polling station to open in Kabul, Afghanistan, Saturday, Sept. 28, 2019. Afghans headed to the polls on Saturday to elect a new president amid high security and Taliban threats to disrupt the elections, with the rebels warning citizens to stay home or risk being hurt. (AP Photo/Ebrahim Nooroozi)

AMB. ROYA RAHMANI: ELECTIONS IN AFGHANISTAN ARE CRITICAL -- THEY NEED US SUPPORT ON THE PATH TOWARD PEACE

AFP quoted observers from the Afghanistan Independent Human Rights Commission as saying that turnout appears to be low, especially among woman.

Voters stayed away from the polls amid the Taliban attacks and the Islamist group’s pre-election threats, Reuters reported.

Election officials extended voting by two hours after polling stations around the country failed to open on time amid technical problems, according to Reuters.

“It took the first voter 31 minutes to vote,” Nishank Motwani, an observer stationed in Kabul. “For subsequent voters, it was taking around five minutes and then it started to streamline to 3 minutes and 30 seconds.”

“Election commission staff looked panicked and voters were getting angry that the queue was not moving,” he told Reuters.

Afghan President Ashraf Ghani, right, casts his vote at Amani high school, near the presidential palace in Kabul, Afghanistan, Saturday, Sept. 28, 2019. Afghans headed to the polls on Saturday to elect a new president amid high security and Taliban threats to disrupt the elections, with the rebels warning citizens to stay home or risk being hurt. (AP Photo/Rahmat Gul)

When the polls did close there were fears that accusations of fraud and misconduct could overwhelm any election results, the Associated Press reported.

The government's push to hold the vote was in itself controversial. In an interview with the AP last week, former Afghan president Hamid Karzai, who still wields heavy influence, warned that the vote could be destabilizing for the country at a time of deep political uncertainty and hinder restarting the peace process with the Taliban.

On Saturday, one of the first reports of violence came from southern Afghanistan, the former spiritual heartland of the Taliban. A bomb attack on a local mosque where a polling station was located wounded 15 people, a doctor at the main hospital in the city of Kandahar said.