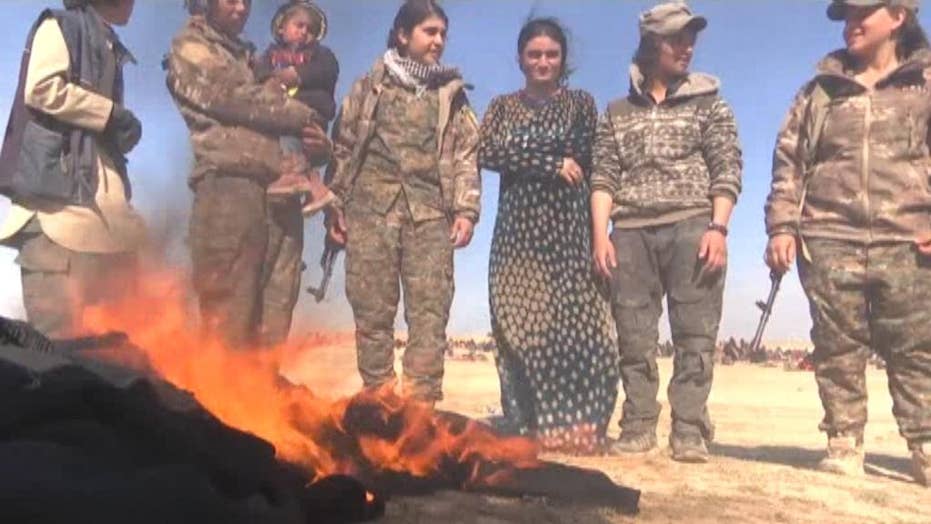 Yazidi women sold as sex slaves leave Baghouz, Syria as U.S. backed forces continue to unleash an assault on the last ISIS stronghold in the country. Freed women are burning their burqas and casting off their veils to showcase their newfound freedom.

On a bitter day in the dead of winter, as 2017 was drawing to a close, Shatha Salim Bashar was rescued from hell.

The Yazidi made it home after almost three-and-a-half years as an ISIS sex slave in Iraq and Syria.

She was kidnapped alongside her mother, her sister, and two younger brothers. In the beginning, she pretended to be the mother of her youngest brother, aged just 3 – in the hopes she would be spared violation if ISIS militants believed she was not a virgin.

But Shatha was violated by every one of her 14 enslavers. Moreover, the tiny young woman was used as a human shield by ISIS, thrust onto the frontlines in Syria and forced to watch her best Yazidi friend die on the battlefield. Her reunification months later should have been one of jubilation – but her friend’s family also arrived with smiles, thinking the women were rescued together. Shatha was the one to break the shattering news.

In spite of all she has endured since ISIS suddenly stormed her village of Kocho, in the foothills of Iraq’s Sinjar Mountain on August 15, 2014, Shatha’s scars – inside and out – have become her stories.

Next month, Shatha will travel to Germany and face one of her alleged rapists in the court of law as he stands trial for ISIS membership in his European home of origin, a representative for the Kurdish President’s Office told Fox News. She intends to testify against him.

On a bitter day in the dead of winter, as 2017 was drawing to a close, Shatha Salim Bashar, now 28, was rescued from ISIS sex slavery (Office of Kidnapped Affairs)

It has been more than five years since ISIS ravaged the villages of Iraq’s Sinjar Mountain – slaughtering thousands of Yazidi boys and men and abducting thousands of girls and women into their ranks of sex slavery.

And Shatha wants to be a voice for the voiceless. She wants to remind the world not to forget their fractured community who are left languishing with little in the way of help.

According to statistics issued to Fox News from the Office of Kidnapped Affairs – established in 2014 by the now President of the semi-autonomous Kurdistan Regional Government, Nechirvan Barzani, to rescue kidnapped Yazidis – 550,000 Yazidis remain in war-ravaged Iraq. Some 360,000 of them are still in displacement.

The number of orphans produced by the invasion stands at 2,745 and the number of Yazidis who have emigrated out of Iraq, their ancestral homeland, is documented to be more than 100,000.

Moreover, 80 mass graves have been discovered in the Sinjar region, and the Islamic terrorist outfit blitzed 68 of their religious temples throughout the four-year war.

June 20, 2015: Yazidi refugees hold banners at a Syrian and Iraqi refugee camp in the southern Turkish town of Midyat. (REUTERS)

While the Office of Kidnapped Affairs rescued Shatha, along with her mother and sister, her brothers – who were just 8 and 3, remain unaccounted for. The last she saw of the small boys, they were carted off to ISIS training camps.

“We need help to rescue the rest of the people that are still missing,” Shatha said.

The Office of Kidnapped Affairs made its most recent rescue last week – two Yazidi girls were brought back from the rebel-stronghold of Idlib, Syria. Since the “Caliphate” formally crumbled earlier this year, the Office has spread its resources into locating the lost girls and boys across Syria and Turkey. Many of them are believed to be disguised as Muslim wives; still entangled in their terrorist purgatory.

Shatha’s brothers are two of thousands of Yazidi boys yanked into the ISIS lair of forced conversion, indoctrination, and violence.

“Yazidi boys who are forced into Cubs of the Caliphate training often are the amongst the most courageous fighters and volunteer for suicide missions, believing they will go to the ‘The Paradise,'” said Anne Speckhard, director of the Study of Violent Extremism (ICSVE) and Adjunct Associate Professor of Psychiatry at Georgetown University. “These boys were separated from their older male relatives by ISIS who shot them dead and from their mothers and sisters. Of course, they would opt for any escape offered to them – a palatable escape from overwhelming psychic pain and unbearable traumatic grief.”

Subsequently, Hussein al-Qaedi, the Yazidi Director of the Office for Kidnapped Affairs, is calling for permission from the central government to conduct DNA testing inside the detainment facilities where foreign ISIS fighters and their families are held.

“We believe Yazidis are among them. If countries take back foreign fighters, they might take Yazidi kids with them,” he stressed. “And then they will be disappeared forever.”

Hussein al-Qaedi, the Yazidi Director of the Office for Kidnapped Affairs, is calling for permission from the central government to conduct DNA testing inside the detainment facilities where foreign ISIS fighters and their families are held. (Fox News/Hollie McKay)

The tight-knit Yazidi faith, which prohibits interfaith marriage and conversion into the religion, is also grappling with integrating babies conceived-out-of-rape to ISIS fathers. Community leaders have called for the infants to be embraced, but the notion is a strange and unsettling one for the ethnicity who have long lived reserved lives dotted across quiet farmlands.

It’s unclear exactly how many babies have been born from the tragedy, but official estimates hover between 100-200. While Yazidi’s religious authorities have announced that they will subvert their ancient traditions and accept the babies as Yazidis, the matter is further complicated by Baghdad’s law that children must take the paternal religion.

It’s a decree many hope will be formally changed.

As it stands now, most Yazidis live in tattered tents in displacement camps, and in ravished and abandoned dwellings across the Nineveh Plains. Funds are fast falling, and the despair is searing.

“Infrastructure is disintegrating. Public washrooms need to be renovated. There is an ongoing lack of electricity and water in the camp and in local areas. Some Yazidis are still struggling for food,” Lisa Miara, Founder of Springs of Hope Foundation Inc., lamented. “Some women suffer from a kind of Stockholm Syndrome and (want to) return to their captors. There are still women being held as ISIS wives.”

Speckhard also noted that the trauma for some Yazidi women runs so deep that they are known to “re-enact their rape,” which she referred to as “pseudo-seizures.”

“The young girl woke up out of it tearful and disorientated,” Speckhard said of one case. “Her sisters say it is the reason they avoid talking about ISIS and their rape experiences, to avoid triggering one of these seizures and that it happens multiple times a day to their sister.”

In this March 15, 2019 file photo, Iraqi Yazidi women mourn during the exhumation process of a mass grave in Iraq's northwestern region of Sinjar.  (AP)

Shatha and her family are among the tens of thousands left languishing in a displacement camp on the outskirts of the Kurdish city of Duhok. They have little in the way of help when it comes to gluing together what is left of their lives, but she said her camp – called Rwanga – at least has prefabricated caravans.

Many other camps are stuffed with tethered tents from 2014, and she wants to see that small but pivotal improvement.

“Yazidis need not only boxes of food; we need a guarantee that we can survive. We can’t spend our whole lives in camps. We want to go home. But we cannot go home without security,” Shatha underscored. “There is still a lot of armed conflict and illegal groups there. If we can feel safe, we can start rebuilding our areas.”

Safety, for now, feels something of an illusion. The black flags of ISIS still wave in the shadows.

“Insurgent-style attacks by ISIS still happen regularly, with some of those attacks targeted specifically at Yazidis. The Yazidi community knows these realities,” said Ian Bradbury, CEO of 1st NAEF, a non-profit focused on humanitarian aid and assisting victims of all gender-based violence. “After 5 years, there is little hope of a return to any semblance of their former lives living off the mountain and the valley lands around Sinjar.”