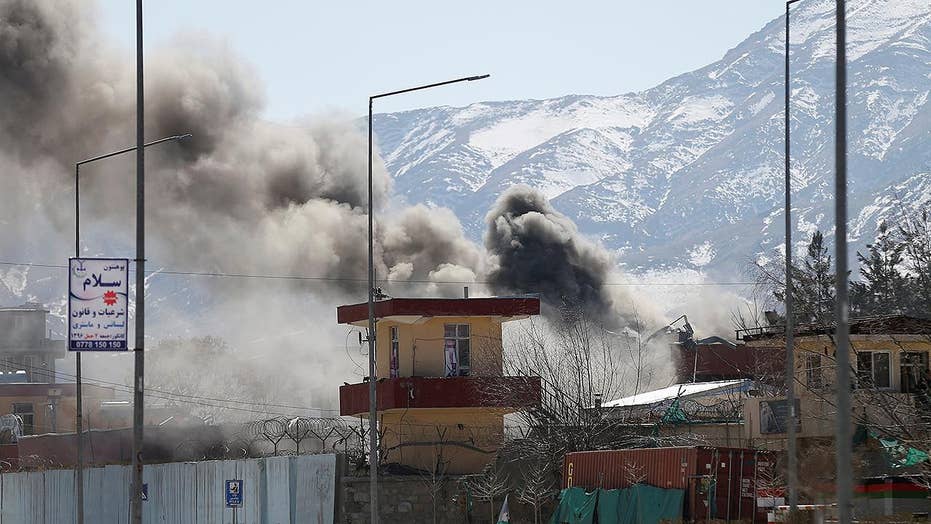 What is behind the wave of Taliban attacks?

Taliban ramps up deadly attacks. Gen. Campbell on why the terrorists are lashing out and what America's next move should be.

Locals have been warning for weeks that further pockets of Ghazni province were on the brink of falling to the Taliban, and alas, over the weekend the brutal insurgent group reportedly ascertained further control of the area around 100 miles south of the capital Kabul.

Heavy clashes were ongoing Sunday in the Ajristan district of Ghazni — with Taliban fighters closing in on government forces — and edging closer to the police headquarters and government compound. Telecommunications also were reported to be down, while the Taliban sealed off the surrounding roads.

The Taliban claimed via its media wing, which has not yet been independently confirmed, that it successfully had obtained control of the district — boasting that a “major of enemy troops surrendered to Mujahedeen and the rest were forced to flee,” and that the district center was seized “without any firefight.”

Combat in the district was ignited three days ago, and on Saturday local officials cautioned that sending in reinforcements was crucial, warning of the “tragic” outcome should the government lose control of the district.

The possible Taliban capture comes less than three days after heavy fighting in the 50,000-person Afghan city of Farah, which last week saw some of the most intense fighting in the area in months. On Tuesday, Taliban insurgents opened fire on the western provincial capital — taking over several crucial checkpoints.

Heightened fighting between the terrorist group and Afghan forces continued for more than 24 hours, followed Thursday by a second Taliban-initiated attack. Afghan special forces, with U.S. air support, eventually propelled the insurgents out — in the end, leaving more than 25 security personnel and 300 fighters dead.

Authorities since have shut down more than 400 primary schools and higher education institutes to protect the students and personnel, projecting that they will reopen after the conclusion of Ramadan in mid-June. Afghan and U.S. security forces are believed to have been taken by surprise regarding the Taliban attack, however locals and journalists claim that they had been sounding the alarm that Farah was on the brink of falling for some time.

The Taliban claimed it had successfully obtained control of the district, but the claim was not independently confirmed. (File)

A spokesperson for the country’s Ministry of Defense (MOD) told Fox News Sunday that the Afghan National Armed Forces (ANSF) were fighting back courageously and over the past 24 hours alone had launched 12 joint offensive and scheduled offensive operations, launched 79 special commando operations and 10 air strikes “aimed at protecting people’s lives and repressing terrorists across the country.” Air force specialists conducted 69 flights to support ANA ground forces — killing 110 terrorists, wounding 15 wounding and leading to the arrest of 3 more.

The operation stretched across an array of some 12 Taliban-torn provinces including Ghazni and Farah.

One Afghan security official told Fox News that Farah, situated near the Iranian border, long had been subject to unrest, and is considered to be a “logistical supply” hub for the Taliban.

“Farah did not fall and Farah will never fall,” Nicholson said. “We will stay with you until we bring this war to a peaceful conclusion.”

Deepening security concerns and unprecedented numbers of suicide bombings have debilitated Afghanistan across the board in recent months, including the targeting of local journalists. An increasingly outraged Afghan population has put further pressure on the Ashraf Ghani-led federal government to double-down on its efforts to bring the Taliban to the negotiating table and configure a political end to the decades-old war.

Ghani has offered “unconditional peace talks” to the Taliban, which largely is responsible for the deaths of some 3,400 NATO troops — at least 2,300 of which were Americans — in a protracted conflict that has cost U.S. taxpayers up to one trillion dollars since 2001.

NATO foreign ministers in April issued a statement saying they were “united in their support” for Ghani’s political attempts to end the conflict. As part of those negotiations, incentives are being dangled at the Taliban — who skeptics contend currently are winning the war — ranging from recognition as a political party, to the release of some prisoners along with a ceasefire agreement.

The Taliban have ignored Ghani, which some critics contend leaves the Afghanistan government in an even weaker position.