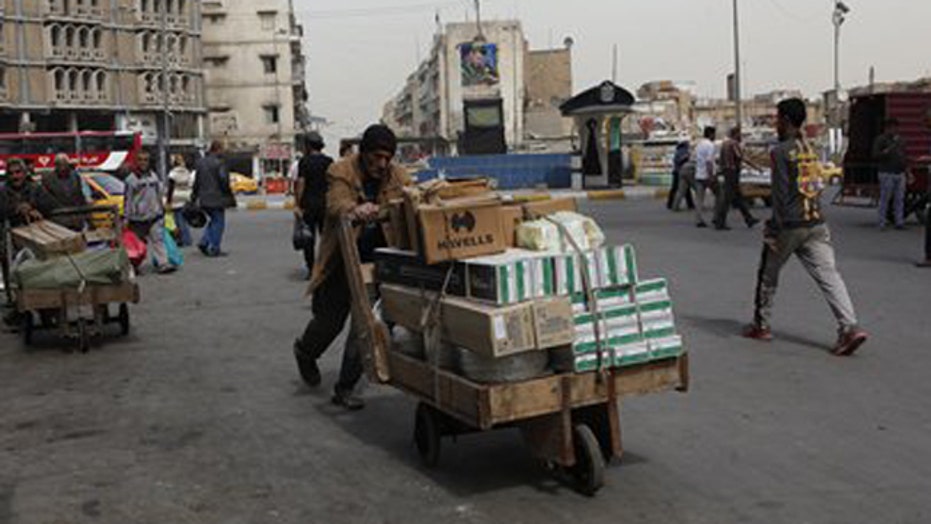 Is Iraq better off today, than it was ten years ago?

John Negroponte says the U.S. should have waited for the international inspection process to play out

BAGHDAD – It's been more than six years since a bomb ripped away the eyes from Shams Karim, killed her mother and left the little girl, now 7, blind and disfigured for life. Psychiatric drugs help control her outbursts of crying and screaming.

In Baghdad, life goes on much as it has since the Ottoman sultan ruled these parts. Porters force loaded carts through narrow bazaars as amateur breeders' beloved pigeons swoop overhead. The calls to prayer from turquoise-domed mosques provide a rhythm to the day.

Yet the legacy of a war that began a decade ago remains very much a part of life here too. Bullet holes still pockmark buildings, and towers wrecked by American missiles and tank shells have not fully been rebuilt. Iraqi soldiers in body armor corral cars into road-clogging checkpoints, their fingers close to the trigger, ever wary of the next attack. At 1 a.m., a curfew shuts down the capital's streets, many still lined with blast walls.

It's hard nowadays to find anybody in much of the country who hasn't lost a friend or relative to the bloodletting that followed the U.S.-led invasion. Shams' mother is buried among the densely packed graves in Najaf, where an ancient cemetery is at least 40 percent larger than it was before the war. Each new bombing sends more coffin-topped cars south to the hot, dusty city of the dead.

The Bush administration had hoped the war that began with airstrikes before dawn on March 20, 2003 — still the previous evening back in the States — would quickly rid Iraq of purported weapons of mass destruction, go after extremists and replace a brutal dictatorship with the foundations of a pro-Western democracy in the heart of the Middle East.

Ten years on, Iraq's long-term stability and the strength of its democracy remain open questions. The country is unquestionably freer and more democratic than it was before the "shock and awe" airstrikes began. But instead of a solidly pro-U.S. regime, the Iraqis have a government that is arguably closer to Tehran than to Washington and which struggles to exert full control over the country itself.

Bloody attacks launched by terrorists who thrived in the post-invasion chaos are painfully still frequent — albeit less so than a few years back — and sectarian and ethnic rivalries are again tearing at the fabric of national unity. The top-heavy government is largely paralyzed by graft, chronic political crisis and what critics fear is a new dictatorship in the making. The civil war in neighboring Syria risks sowing further discord in Iraq.

By the time the U.S. military pulled out of Iraq in December 2011, nearly 4,500 Americans and more than 100,000 Iraqis had lost their lives. No active WMDs were ever found. The war cost American taxpayers hundreds of billions of dollars and diverted resources from Afghanistan, where the Taliban and al-Qaida rebounded after their pummeling in the 2001 invasion.

In Iraq, the Americans and their allies left behind a broken, deeply traumatized country — a land no longer at war but without peace. The toppling of Saddam Hussein's regime destroyed not only dictatorship but also the mechanism of law and order, enabling the rise of al-Qaida and the unleashing of sectarian, ethnic and class hatreds long suppressed by a reign of fear.

The invasion transferred power overnight to oppressed Shiites and Kurds but left many Sunni Arabs alienated. It established a system of sectarian-based politics that undermined national unity.

And it helped trigger a vicious insurgency that ruined countless lives without regard for religion or ethnicity.

It's easy to forget about the war's hardships inside the Haji Zebala juice shop on the capital's historic Rasheed Street, where they're still serving up fresh-pressed grape juice like they have for generations — though fear of bombings means customers are no longer willing to wait in line for 15 minutes as they did before the invasion.

Black-and-white pictures of old Baghdad cover the walls, transporting visitors to a time before Iraq became a byword for death and destruction.

Diaa al-Mandalawi, who works at the juice shop, remembers being surprised at just how quickly American helicopters came to be hovering over his city.

"We thought things would get better because the Americans promised us a lot," he said.

But the years of bloodshed that followed the heady days after Baghdad fell have taken its toll, he continued, and it is taking too long for his country to get back on its feet. "It's like building a house, but the process is too slow."

On the bright side, campaign posters once again line Iraqi streets, heralding a new round of voting coming up. In many places they hang alongside banners adorned with the image of revered Shiite saint Imam Hussein — a public display of faith rare during Saddam's rule.

There are other signs of progress too.

Fresh investment in the oil sector has pushed Iraq into the No. 2 producer spot in OPEC, boosting the economy. New businesses are opening up, like a popular Baghdad shopping mall and swanky hotels in the capital, southern Shiite pilgrimage centers and the northern Kurdish city of Irbil.

At the newly opened Aroma restaurant in Baghdad, waiters take orders for spaghetti and pizza on iPads. Dalia Ayad, a college student eating there with friends, said the new businesses are a sign that Iraq is moving forward.

"There is a change going on in the country," she said. "But it's not moving fast enough."

That is partly because Iraq remains a sharply divided society

Majority Shiites tend to see more reason for hope than Sunnis do.

"Now people can hold protests against the government and criticize government officials," said Haider Ali Hassan, a government employee in the southern city of Basra. "There are a lot of shortcomings and problems ... but it is still better than Saddam's time."

Saddam's Sunni-dominated government ruthlessly suppressed dissent, especially from the Shiite and Kurdish communities where opposition to his rule was more widespread.

The U.S.-led invasion upset the Sunnis' privileged position since Shiites and Kurds were more willing to support the new order.

"The United States destroyed the last remaining good things in Iraq. The current situation is definitely not any better than under Saddam," said Muhanad Majid, a Sunni coffee shop owner and father of two in the northern city of Mosul.

The American decision to disband the Iraqi military and bar many senior members of the newly outlawed Baath from public-sector jobs suddenly left many Iraqis without work. The ways the policies were implemented added to the resentment of Sunnis, who were the bedrock of the military officer corps and held many senior posts in Saddam's regime.

That anger is now reflected in mass anti-government rallies each Friday in western Anbar province, the birthplace of the Iraqi insurgency, and other primarily Sunni areas.

The demonstrations present a potent and surprisingly persistent challenge to Baghdad, which must also contend with the ethnic Kurds' increasing efforts to assert their autonomy.

"We thought the Americans and the United Nations would bring us a democratic system that would provide the country with security, reconstruction and prosperity. But it turned out the only change was to transfer power from Sunnis to Shiites," Ahmed Abu Risha, a prominent Sunni sheik who once helped Americans battle al-Qaida, complained during a recent interview. "Of course it's a disappointment."

Iraqi Prime Minister Nouri al-Maliki's political rivals accuse him of using his office to sideline and intimidate political opponents. Many Arab Sunnis and Kurds believe he is consolidating power to benefit members of his Shiite sect at their expense.

He remains directly in charge of the powerful Interior Ministry, giving him control over state security forces. They and the country's military have been unable to thwart frequent mass-casualty attacks that continue to plague the country. On Thursday, attackers unleashed a carefully planned assault with car bombs and a team of gunmen on the Justice Ministry in the heart of downtown Baghdad, killing more than 20 people as hundreds of others crouched terrified in their offices.

Al-Maliki, who has held power since 2006, dismisses his critics as out to create divisions and provoke sectarian strife.

In a recent interview, the prime minister said he believes the country is moving in the right direction, though he acknowledged that the shift away from a centralized system to a more federal political structure will take time.

And he thinks Iraq's ties with America are improving despite concerns about his perceived closeness to U.S. foe Iran.

"It's natural to have ups and down in the relationship," he said. "We believe in the importance and the necessity of having relations with America, and we feel that the Americans are content with the results of their sacrifices and efforts in Iraq."

The last American combat troops rolled out of Iraq and into Kuwait in December 2011.

More than 150 U.S. military personnel remain mainly to provide training and facilitate arms sales — as is the case in many countries — but they are an arm of the American Embassy, a sprawling fortress the size of Vatican City. Along with other embassies and Iraqi government offices, it is tucked inside the relative safety of Baghdad's heavily fortified Green Zone, which remains a no-go zone for most Iraqis.

Signs of American influence can be found. Rap has gained a following among Iraqi youth, with young MCs spinning tales of hardship in bilingual rhyme. The ubiquitous police and army soldiers — some with Oakley-style sunglasses popular with American GI's — cruise the country's roads in all-American Humvees and modified Ford pickups.

But the American military withdrawal has significantly shifted Washington's clout in Baghdad's halls of power.

In his final report to Congress this month, the U.S. Special Inspector General for Iraq Reconstruction, Stuart Bowen, came to the conclusion that the $60 billion the U.S. spent on rebuilding in Iraq produced too few results. The war itself cost American taxpayers hundreds of billions more.

Al-Maliki and his political allies are increasingly forging ties with neighboring Shiite powerhouse Iran, particularly in Iraq's conservative south, which hundreds of thousands of Iranian pilgrims visit each year.

That closeness, unthinkable under Saddam, is worrying for Washington. American officials are furious, for example, that Iraq may have allowed Iranian planes carrying weapons to Syria to transit its airspace — a charge al-Maliki denies.

"Iraq is increasingly aligning itself with Iran in a way that is going to make it difficult for Iraq to claim it has an independent foreign policy," said Toby Dodge, a Middle East expert at the London School of Economics and author of a recent book on postwar Iraq.

Meanwhile, the drumbeat of violent attacks primarily launched by the Iraqi arm of al-Qaida and other Sunni militants continues to take its toll on ordinary Iraqis, such as 13-year-old Ali Hassan Wali.

The sixth-grader was walking home from a holiday visit to his uncle's house in Baghdad's poor Shiite neighborhood of Sadr City in October when a car bomb detonated nearby.

The blast peppered him with shrapnel and sheared off his right foot, ending his teenage hopes of becoming a professional soccer player. He now gets by on crutches while awaiting a prosthetic.

"I hope my country gets better. I think it will after we get rid of all the terrorists who make the explosions," he said.

Others are still struggling with old wounds.

Shams, the girl blinded in a car bombing in 2006 when she was an infant, now refuses to wear the prosthetic eyes she received during treatment abroad. Her father, Husham Fadhil Karim, sometimes finds her uncontrollably banging her head against the door.

"She has no future," the father said during a recent visit to his home in Baghdad's Dora neighborhood. "If we had real security, things like this would never happen."