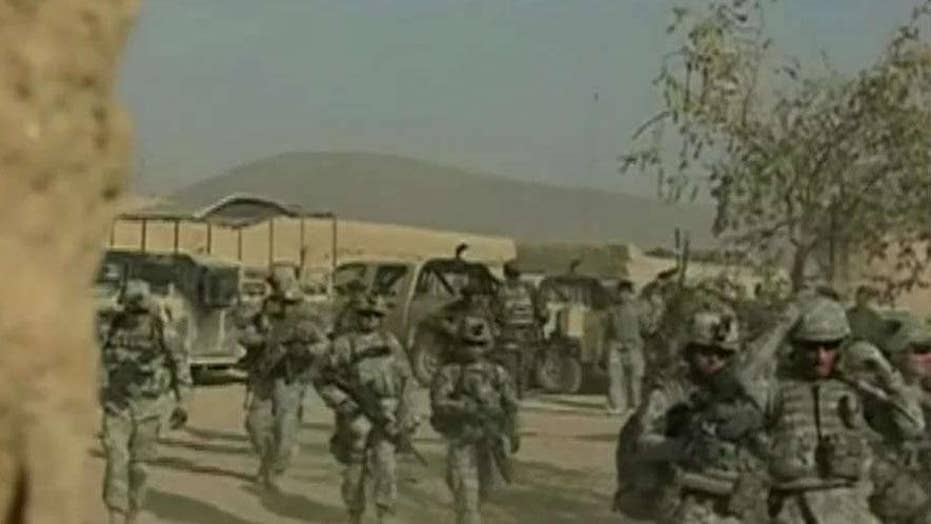 President Trump weighs decision to pull all US troops from Afghanistan

As Secretary of State Mike Pompeo continues peace talks with the Taliban, he says the U.S. is not ready to withdraw troops at this time from Afghanistan; Lucas Tomlinson reports from the Pentagon.

The two service members were paratroopers from the 82nd Airborne Division, according to officials.

DEATH TOLL IN ATTACK AT AFGHAN POLITICAL OFFICE RISES TO 20

"It is with a heavy heart that I inform you of the loss of two paratroopers from the brigade during combat operations," Col. Art Sellers wrote.

"I ask you to respect the official Department of Defense notification process, a process which may take a few days. If you receive any information about these combat operations, either factual or speculative, I ask you to refrain from sharing it for the sake of the paratroopers’ loved ones."

Trump says he does not want the U.S. to stay in Afghanistan as policemen, could end the war in one week.

NATO said in accordance with U.S. Department of Defense policy, the name of the service members killed in action are being withheld until 24 hours after notification of next of kin is complete.

The deaths mark the 11th and 12th U.S. service members killed in Afghanistan this year -- a number nearly equal to the 13 U.S. troops killed all of last year, according to the Department of Defense. In 2010 there were over 100,000 U.S. troops serving in Afghanistan and  437 soldiers were killed in combat.

The recent killings come after eight rounds of U.S.-led peace talks with the Taliban in Qatar.

Earlier on Monday, Secretary of State Mike Pompeo said President Trump ordered him to reduce the number of American troops in Afghanistan by the 2020 election.

“That’s my directive from the President of the United States. He’s been unambiguous: End the endless wars. Draw down. Reduce. It won’t just be us,” Pompeo said at the Economic Club of Washington, D.C.

Pompeo has said in previous interviews NATO forces and other U.S. allies would be reducing their footprint in Afghanistan as well if peace talks are successful with the Taliban.

The secretary of state has previously given September 1st as a deadline for the talks.