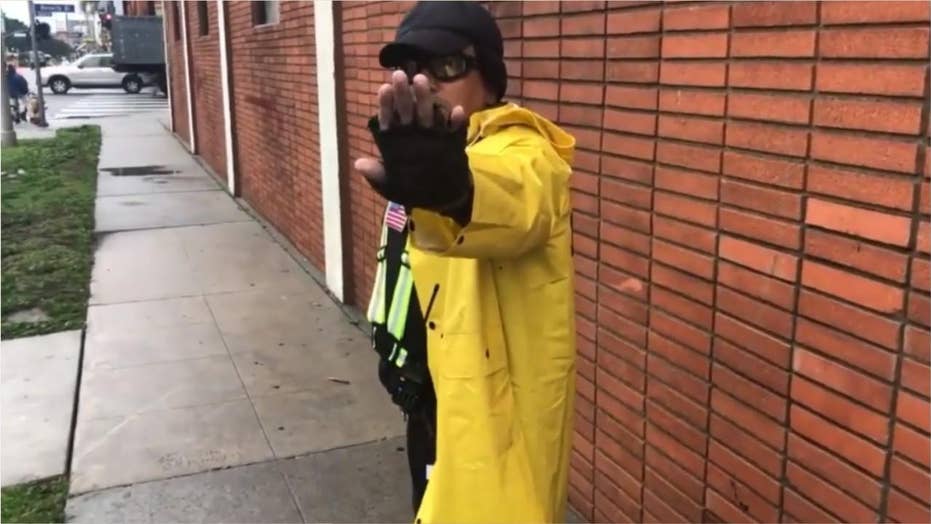 The transgender YouTube personality who was shot outside a Los Angeles synagogue on Thursday is part of an online community that intentionally films law enforcement officials to get their reaction and test constitutional rights.

Zhoie Perez, who goes by the name “Furry Potato,” has live-streamed the ordeal, where she got shot in the leg outside the Etz Jacob synagogue.

In the video, Perez is seen walking around the synagogue before a security guard begins questioning and warning her not “to do anything crazy over here.” The Jewish communities have recently taken additional steps to secure their synagogues following the rise of anti-Semitism in the country and last year’s Pittsburgh synagogue shooting that killed 11 Jews.

After filming the guard standing behind the synagogue’s gate without saying anything, a shot is fired and Perez starts running away, saying she was shot in a leg. “That was a warning shot!” the guard shouted at the YouTuber.

Perez is part of a YouTube community that engages in the so-called “First Amendment audit” – a practice where an individual purposely films a police officer, security guard or any other law enforcement official to see how they react.

Whenever an official approaches those filming in the public space, they remain silent and refuse to identify, citing their constitutional rights and the fact that they aren’t breaking any laws by filming authorities.

“You put yourself in places where you know chances are the cops are going to be called. Are they going to uphold the Constitution, uphold the law … or break the law?”

“It’s not only about shining a light on the crooked bad cops but shining an even brighter light on the good cops,” Perez told the Washington Post. “You put yourself in places where you know chances are the cops are going to be called. Are they going to uphold the Constitution, uphold the law … or break the law?”

On Thursday, Los Angeles police promptly came to the shooting scene, with the police department saying Perez was taken to a hospital with non-life-threatening injuries.

The guard has been identified as 44-year-old Edduin Zelayagrunfeld and was arrested on suspicion of assault with a deadly weapon, reports say.

Perez told the newspaper that she wasn’t planning to perform the audit of the synagogue and initially began recording after getting interested in the building’s architecture.

“I saw the synagogue, and I said I’m going to go check it out. It’s got a lot of neat stuff on it, like the stained glass windows,” she said. “It turned into an impromptu First Amendment audit because the security guard almost immediately was getting really aggressive with the filming and putting the hand on the gun,” Perez said.

Another live-streamed video by Perez also shows the backdrop of the incident, with the guard asking her – while holding the gun – why she is filming him.

But while many agree that the auditing practice is an interesting modern way to make some law enforcement officials accountable, some have questioned whether auditors aren’t responsible for provoking officers into confrontation just for the sake of extra views on YouTube.

In Perez’s case, some wondered whether it was smart to film the synagogue guard at the height of uneasiness within the Jewish community.

“The Constitution protects even obnoxious gadflies, but I do have to step back for a second and say at a time when Germany, France, Britain and the U.S. have seen significant spikes in anti-Semitic hate crime, that to do this, is certainly constitutionally protected, but also seems to skirt common sense."

“These are folks that like to leverage social media by going into public places, where they have a right to be, and testing the reactions to them by property owners and law enforcement,” Brian Levin, director of Cal State San Bernardino's Center on Hate and Extremism, told the Los Angeles Times. “What’s interesting is, it can go across the ideological spectrum. It’s a movement, but it’s broad.”

“The Constitution protects even obnoxious gadflies," Levin added, "but I do have to step back for a second and say at a time when Germany, France, Britain and the U.S. have seen significant spikes in anti-Semitic hate crime, that to do this, is certainly constitutionally protected, but also seems to skirt common sense."

Bradford Betz contributed to this report.