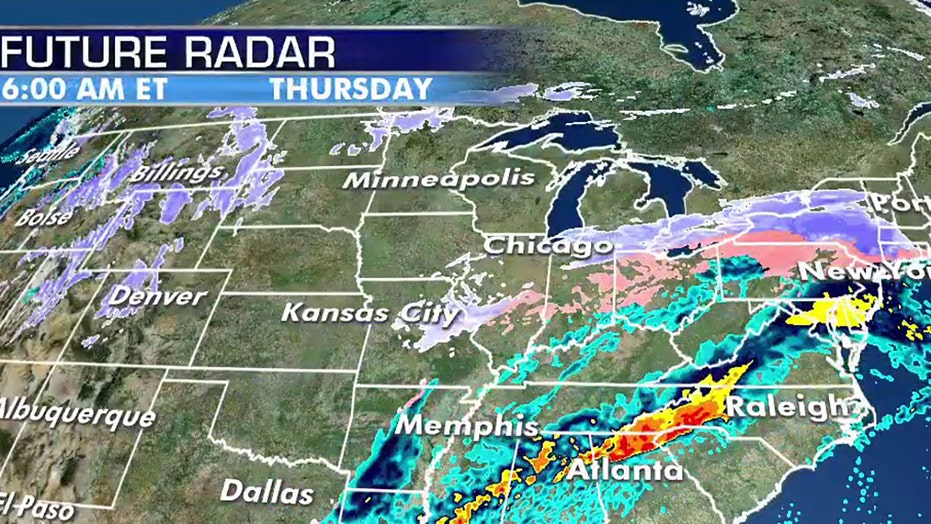 A winter storm system that brought heavy snow out West moved across the Plains Tuesday, a day after a police department in Wyoming officially declared a "snow day" due to hazardous conditions.

The storm currently centered over western Texas, along with moisture from the Gulf of Mexico, fueled "multiple rounds" of heavy rain and thunderstorms from the central Gulf Coast to the Ohio Valley and the central Appalachians, according to the National Weather Service.

"This is going to be a several-day event as it moves closer toward the East Coast," Fox News Senior Meteorologist Janice Dean said on "Fox & Friends."

WHAT IS THUNDERSNOW? WHY SNOWSTORMS PRODUCE LIGHTNING

Much of the nation will see heavy rain, freezing rain, ice, and heavy snow from the system as it moves east, according to Dean.

A swatch of snow, freezing precipitation, and rain will impact much of the nation as a storm system moves towards the East Coast. (Fox News)

Snow is expected to stretch from parts of the Texas panhandle, Oklahoma, and through the Central Plains into the Ohio River Valley before eventually making it into the Northeast by the end of the week.

Winter weather advisories and winter storm warnings have been issued due to the storm. (Fox News)

"This is something we're going to have to watch over the next couple of days," Dean said.

Winter storm warnings and winter weather advisories are in effect from parts of Texas into Missouri ahead of the storm. The NWS said that around six inches of snow fell in Casper, while Story, Wyo., saw 20 inches of snow.

The Casper Police Department said on Facebook that due to "EXTREMELY hazardous conditions" the department declared a "snow day," which meant that officers were unable to respond to minor crashes.

The department later shared photos of officers trekking through whiteout conditions and taking time to have fun in the new snow.

As the storm moves east, the NWS Weather Prediction Center said that a band of "significant snowfall" is likely from west-central Texas to central Oklahoma.

A band of "significant snowfall" is forecast from west-central Texas to central Oklahoma. (Fox News)

"The potential exists for 4 to 8 inches of snow for some of these areas by Wednesday night," the NWS said. "Lighter snow is expected farther north across the southern Great Lakes and into New England, and some freezing rain is likely across parts of the Ohio Valley and into Pennsylvania."

Snow showers continued in the Denver area, which saw several inches. The Denver Police Department said that about 169 crashes were reported between 7 a.m. and 6 p.m. on Monday.

Flight-tracking website FlightAware said more than 170 flights out of Denver International Airport were canceled Monday due to the storm. Hundreds of flights also were delayed.

Heavy snow closed long stretches of interstates 80 and 25, and other roads across central Wyoming. The storm also closed some Wyoming schools and a small Casper airport.