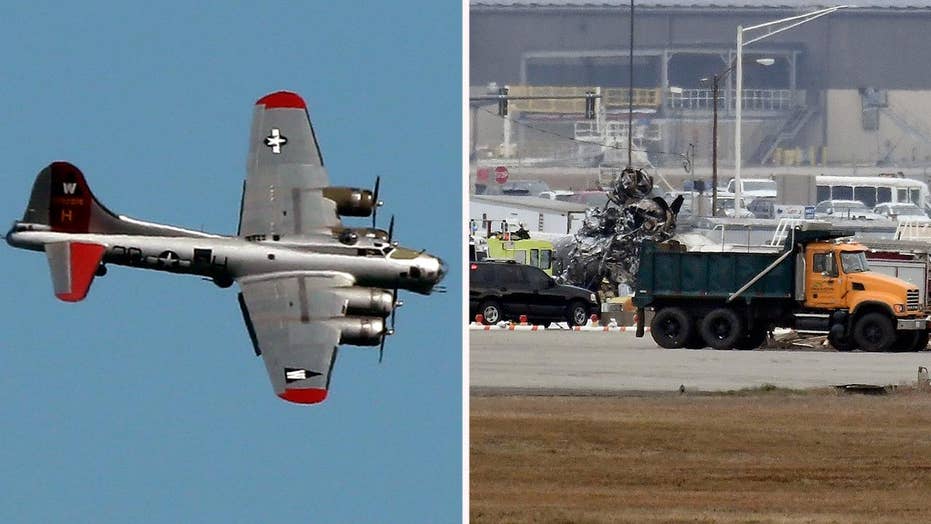 One of the seven people killed when a World War II-era bomber crashed in Connecticut on Wednesday shared enthusiastic updates on Facebook about the doomed flight just minutes before disaster struck.

The Boeing B-17 carrying 10 passengers and three crew members slammed into a maintenance building at Bradley International Airport in Windsor Locks, Conn., after the pilot reported a problem and attempted to land shortly before 10 a.m. Audio transmissions captured the pilot telling an air traffic controller he needed to return to the airport and land immediately. Asked why, he said: “Number four-engine, we’d like to return and blow it out.”

Connecticut Public Safety Commissioner James Rovella said Wednesday at a news conference that some passengers on the plane were burned, adding "the victims are very difficult to identify." Rovella also warned the death toll could rise.

While authorities have not yet officially identified any of the victims of the crash, a woman who said her husband was on the aircraft at the time posted a letter to Facebook confirming his death after a "long and tragic day." Debra Riddell, of East Granby, Conn., said her husband Robert was among the seven dead, writing "words cannot express how devastated I am."

In this photo released via Twitter by the National Transportation Safety Board, NTSB board Member Jennifer Homendy, left, and investigator Dan Bower stand at the scene where a World War II-era bomber plane, left, crashed at Bradley International Airport in Windsor Locks, Conn., Wednesday, Oct. 2, 2019. ((National Transportation Safety Board via AP)

"He was brilliant, loving, funny, reliable, compassionate and the best man I’ve ever known. The world lost an amazing person today," she wrote. "My heart goes out to the other people that lost loved ones but especially the people who survived this crash."

Robert Riddell was among the seven people killed in the crash on Wednesday, according to his wife. (Facebook/AP Photo)

Robert Riddell, who worked as a business analyst at The Hartford, leaves behind a wife, children, and grandchildren, including a new grandson his wife described as "the apple of his eye."

"He was my soul mate, I will miss him beyond [what] words can ever express," his wife wrote.

In the moments before the deadly crash, Robert Riddell posted to Facebook detailing his excitement about the flight.

In a final post, Riddell shared a photo from inside the plane as it was taxiing for takeoff. "Not much of a view from the seats," he wrote.

At the news conference Wednesday, Rovella said some lives were likely saved by the efforts of people on the ground who reacted swiftly, including a person who raced to help the victims and people on the plane who helped others to escape the fire by opening a hatch, he told reporters.

“You’re going to hear about some heroic efforts from some of the individuals that were in and around that plane,” he said.

The man that opened the hatch in the plane was a member of the Connecticut Air National Guard command chief, according to the National Guard.  The airman, current command chief for the 103rd Airlift Wing and a trained C-130 loadmaster, brought his military-issued flame-retardant flight gloves with him during the flight and was able to open the hatch on the aircraft "allowing other passengers to egress the plane after the crash."

Police told WTNH the man, who authorities asked not to be identified, was sitting in the rear of the plane when it crashed.

“He is very familiar with the back of an aircraft,” Major General Francis J. Evon told WTNH. "Our understanding is he popped the hatch and was able to extract some individuals.”

National Guard officials said the man was suffered injuries in the crash and was transported to Hartford Hospital for treatment. He was released by Thursday night and is recovering at home.

"Any further details on his specific actions will be revealed through the investigation," the National Guard said in a statement to FOX61.

Some of the survivors of the crash were critically injured, authorities said. One person on the ground was also hurt in the crash and a firefighter involved in the response suffered a minor injury. No children were on the plane. Six patients were taken to Hartford Hospital, including two firefighters, FOX61 reported.

The National Transportation Safety Board sent a 10-person team to investigate the cause of the crash.

Officials in the town of Windsor issued a warning about the potential release of firefighting foam used in response to the crash into the Farmington River that could lead to health concerns, FOX61 reported.

The retired, civilian-registered plane was associated with the Collings Foundation, an educational group that brought its Wings of Freedom vintage aircraft display to the airport this week, officials said.

The B-17 that went down Wednesday was built in 1945, too late to see combat in the war, according to the Collings Foundation.

The vintage bomber also crashed in 1987 at an air show near Pittsburgh, injuring several people, the Collings Foundation said. Hit by a severe crosswind as it touched down, the bomber overshot a runway and plunged down a hill. It was later repaired.

The crash Wednesday reduces to nine the number of B-17s actively flying, Rob Bardua, a spokesman for the National Museum of the U.S. Air Force, near Dayton, Ohio, told the Associated Press.