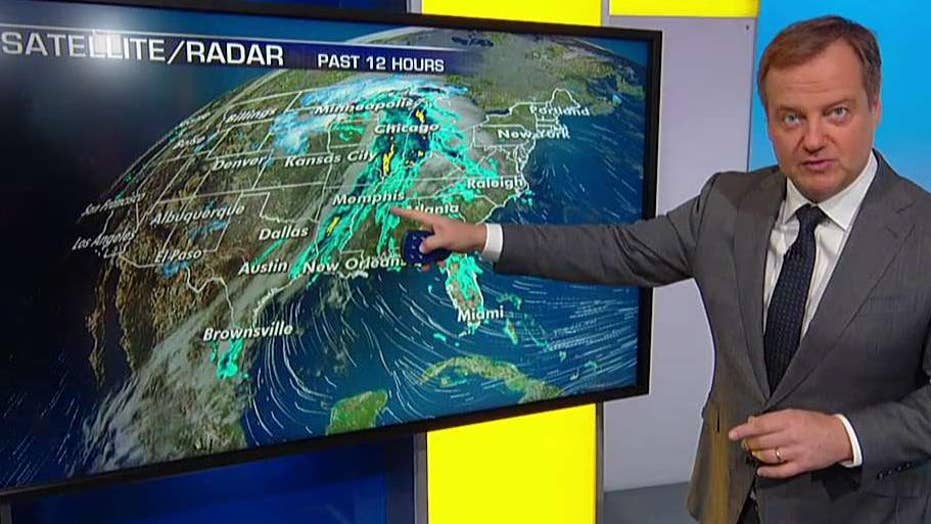 An intensifying winter storm is forecast to wallop the Northern Plains and Upper Midwest through Monday, creating treacherous travel conditions across the region a day after freezing rain led to hundreds of crashes across Minnesota.

The National Weather Service's Weather Prediction Center said the winter storm will bring heavy and blowing snow with blizzard conditions at times from northern Nebraska to northern Minnesota, with storm totals in excess of a foot possible in parts of the Dakotas and northwest Minnesota.

"The northern side of this is where we do have some snow. We also have some of the rain," Fox News Chief Meteorologist Rick Reichmuth said on "Fox & Friends." "It's rain right now in Minneapolis, that will transition back to snow. It's definitely rain in Chicago, throughout all of Wisconsin. Back side of this, some of those spots may be up to six to 12 inches of snow by the time this is all done."

The axis of the heaviest snow will shift to northern Wisconsin and the Upper Peninsula of Michigan by Monday, where six to 12 inches of snow is likely to bring "significant travel hazards" as areas of freezing rain also develop into the Northeast.

"A major ice storm is becoming more likely across northern New York and into central New England as warm air advection and moisture flux from the Atlantic Ocean overrides a shallow layer of sub-freezing temperatures near the surface," according to forecasters. "The potential exists for a quarter to half an inch of ice accretion, and this will likely cause havoc for travelers and disrupt electrical service."

Of the 470 crashes reported on Saturday, 43 involved injuries, and two were fatal.

Freezing rain in southern Minnesota was blamed for 470 crashes on Saturday, according to state patrol. (Minnesota Department of Transportation)

In Stearns County, a fatal crash was reported around 4:30 a.m. in Brockway Township when a vehicle went off the road and crash into trees. Investigators told FOX9 the victim was thrown from the vehicle and died.

The second fatal crash happened around 6:30 a.m. on Interstate 35E when an 82-year-old man died after his vehicle went off the highway and rolled over. Minnesota State Patrol told FOX9 the man was not wearing a seatbelt during the crash.

The freezing rain caused another dramatic scene in the Twin Cities on Saturday when a school bus sliding sideways "downhill" down a roadway. No injuries were reported in that incident, according to FOX9.

Several roads were temporarily closed Saturday morning as authorities responded to the numerous crashes and the Minnesota Department of Transportation issued a no travel advisory until 12:30 p.m. due to the conditions.

While interior regions of the Northeast may a major ice storm, the storm will bring mainly rain closer tot he coast and for the major cities along the Interstate 95 corridor through Monday, according to forecasters.

Ahead of the storm system and cold front, temperatures will be well above normal for the eastern U.S. on Sunday into Monday before cooler air arrives, with record-high temperatures possible in some locations. A few severe thunderstorms could develop across the South ahead of the cold front.

"A lot of very heavy rain showers that are here across parts of the South, some of them potentially severe and as these storms move to the East throughout the day today, we'll see a little bit of potential wind damage," Reichmuth said on "Fox & Friends."