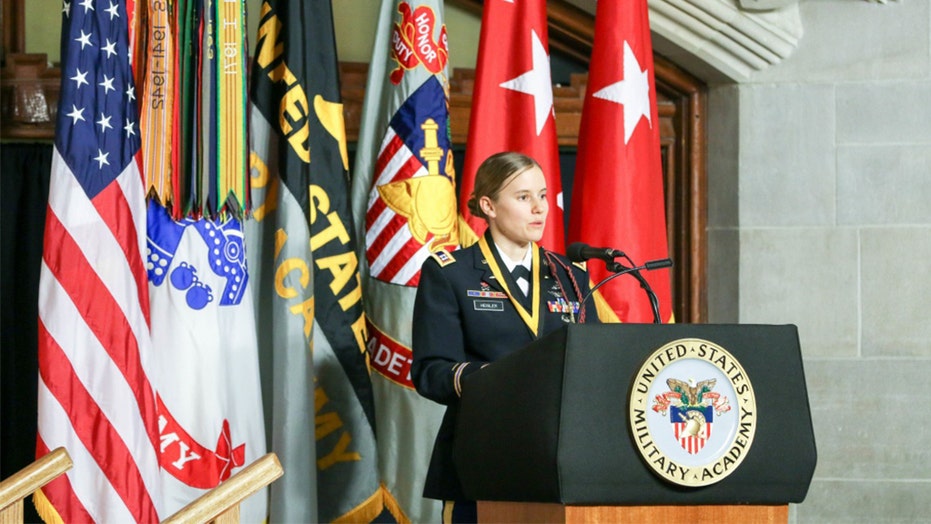 Growing up in Houston in a big sports family, Heisler focused on playing soccer in high school. Her grandfather served in the military and retired as a major general, but neither of her parents were in the military.

It wasn't until after Heisler received an email from a West Point coach inviting her to a recruiting visit at the Military Academy in New York that joining the Army became an option she couldn't pass up. It also became a decision that ultimately led her to being recognized by her alma mater for heroic actions -- she says she was just following her training -- while in Afghanistan as an Apache helicopter pilot in 2015.

Capt. Lindsay Gordon Heisler, USMA Class of 2012, receives the 2019 Nininger Award, presented by the West Point Association of Graduates, this week. Heisler received the award for her actions on Dec. 5, 2015, when she was deployed in Afghanistan. (U.S. Army photo by Brandon O'Connor)

"It was soccer that got me to West Point," she told Fox News on Friday. "Once I got there, it's ultimately the Army and the opportunity to serve my country that kept me there."

Heisler graduated from the academy in 2012 and reported to her first duty station at Fort Rucker, Ala. She then went to Fort Campbell, Ky.

In Alabama, Heisler trained to become an Apache pilot, which appealed to her because of the mission, she said.

"When you're going through flight school, they say choose your aircraft based on what it's designed to do," Heisler explained. "The attack mission appealed to me. It was an opportunity to protect Americans on the ground in enemy territory."

One night while deployed to Afghanistan in December 2015, a routine mission quickly turned into a situation where American soldiers on the ground came under enemy fire as they were being picked up by Chinook choppers.

Heisler and her team did exactly what they were trained to do.

Heisler immediately began communicating with forces on the ground and other helicopters, and she and her co-pilot began to fight back, according to the Army. While coming under fire, "they placed themselves between the ground force and the incoming fire and worked to keep the enemies’ heads down long enough for the Chinooks to land, pick up the Rangers and takeoff."

"In that moment, specifically on that night during that mission, when everything started happening and rounds started flying, we weren't thinking about anything other than acting based on our instincts and what we had trained for years," she said. "Luckily we were able to do our job, and we did it well enough to where we didn't lose any American lives."

"We were thankful we had the opportunity to go do our jobs, and we did it well," she added.

Not a single American was killed that night. Heisler was later awarded the Distinguished Flying Cross for her bravery. The medal is given for "heroism or extraordinary achievement while participating in aerial flight."

Heisler said it wasn't just her actions that saved lives that night -- it was the work of an entire team.

"From the Rangers on the ground to the Chinook pilots to my Apache team, it was a team effort across the entire night and mission," she said.

Heisler was recognized by West Point, which honored her on Thursday with the 2019 Alexander R. Nininger Award for Valor at Arms. The award was created in 2006 and is presented by the West Point Association of Graduates.

Heisler is the first female to receive the award. It was humbling and a "bit of a surprise," she said.

While she is also honored to inspire female service members, she's not solely a female soldier -- she's just a soldier, Heisler said.

"If I've been able to inspire just one female, that's definitely something to be proud of," she said. "With that said, I don't see myself as a female soldier. I see myself as just a soldier who's trying to do my job to the best of my ability for the Americans on the ground that I support."

Heisler is now stationed at Fort Bragg, N.C., where she serves as company commander of Delta Company in the 1st Attack Reconnaissance Battalion, 82nd Combat Aviation Brigade, 82nd Airborne Division. She and her husband will move to Germany in March to be stationed there.