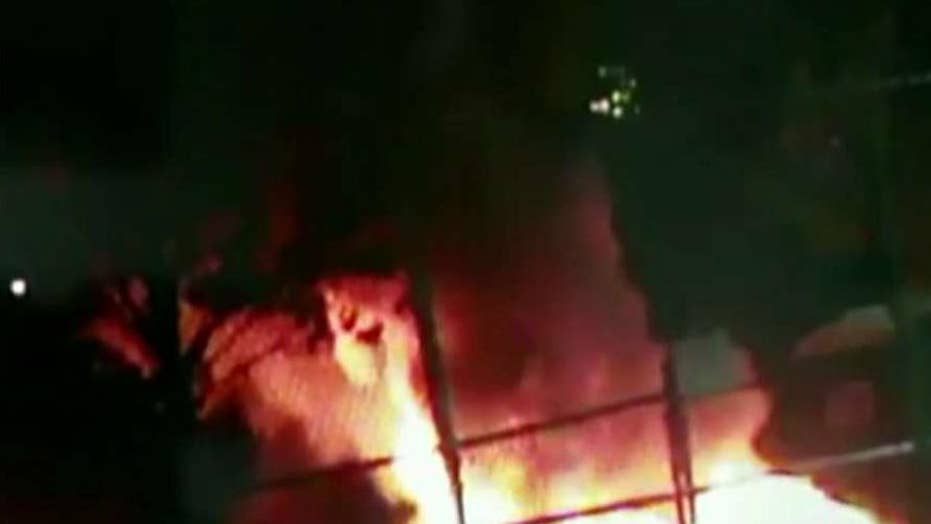 A burning vehicle sending flames shooting high above a perimeter fence can be seen in new surveillance video obtained by Fox News that shows an attack by an armed Antifa supporter last month at a local Immigration and Customs Enforcement detention center in Washington state. The assault was ultimately foiled, but a former acting director of the agency said it could have killed "hundreds."

“Thank God for the Tacoma P.D.," ICE former Acting Director Tom Homan said on "Fox & Friends" on Thursday. "Their professionalism and quick response prevented the loss of hundreds and hundreds of lives, so hats off to them and their quick response."

The attack took place around 4 a.m. July 13 in Tacoma, when self-described Antifa member Willem Van Spronsen, who was armed with a rifle and incendiary devices, took aim at the Northwest Detention Center.

"If he would have been successful in burning that building down, you're talking about over 1,400 lives."

Employees reported he was throwing "incendiary devices" and setting vehicles on fire, and the first officers on the scene described him wearing a sachet and carrying flares, according to the Tacoma Police Department.

Van Spronsen, 69, was trying to ignite a propane tank when he was confronted by officers, who opened fire. The Pierce County Medical Examiner’s office said he died of multiple gunshot wounds.

Homan said that Van Spronsen had a rifle and was shooting "numerous times" into the building before setting fire to a vehicle. In the video, obtained exclusively by Fox News, also provides dramatic sound of blasts and thunder erupting from the police officers as they engage Van Spronsen.

A police officer guards the front of a road block near the Northwest Detention Center Saturday in Tacoma, Wash. after a man armed with a rifle threw incendiary devices at the facility. (Rebekah Welch/The Seattle Times via AP)

"What the video shows is the violence in these attacks on ICE," Homan told "Fox & Friends."

He added there were more than 1,300 illegal immigrants in the facility, in addition to about 100 employees.

"If he would have been successful in burning that building down, you're talking about over 1,400 lives," Homan said.

How dangerous can the 'resistance' become? Reaction and analysis from acting CBP commissioner Mark Morgan.

The day before the assault, Van Spronsen sent a manifesto to friends in which he wrote "I am Antifa," and after the attack he was lionized by members of the leftwing group as a "martyr." Several friends of Van Spronsen said they received a manifesto from him calling the facility "an abomination" and asking "those burdened with the wreckage from my actions" to "make the best use of that burden."

In a Facebook post that has since been deleted, the group Seattle Antifascist Action described the 69-year-old as a "good friend and comrade" who "took a stand against the fascist detention center in Tacoma" and "became a martyr who gave his life to the struggle against fascism."

In the manifesto, obtained by KIRO7, Van Spronsen said he wanted to make a statement at the facility.

"I regret that I will miss the rest of the revolution," he wrote. "Doing what I can to help defend my precious and wondrous people is an experience too rich to describe. I am Antifa."

Van Spronsen had been arrested last year for assaulting a police officer during a June 26 protest outside the same detention center. According to court records, he lunged at a cop and wrapped his arms around the officer's neck and shoulders while the officer was trying to detain a 17-year-old protester, The News Tribune reported. When police handcuffed Van Spronsen, they found he had a collapsible baton and a folding knife in his pocket, according to the court documents.

Van Spronsen pleaded guilty to a charge of obstructing police and was released from custody in October.

ICE employees and contracted workers have been coming under a number of escalating threats. Footage published earlier this week by Breitbart News showed protesters in Florida from groups such as Never Again Action and Black Lives Matter Alliance of Broward County threatening workers and former employees of the GEO Group.

Breitbart reported that the footage was taken a day before shots were fired early Tuesday at an ICE office and GEO Group office in San Antonio, Texas, in what the FBI has called a “targeted attack.”