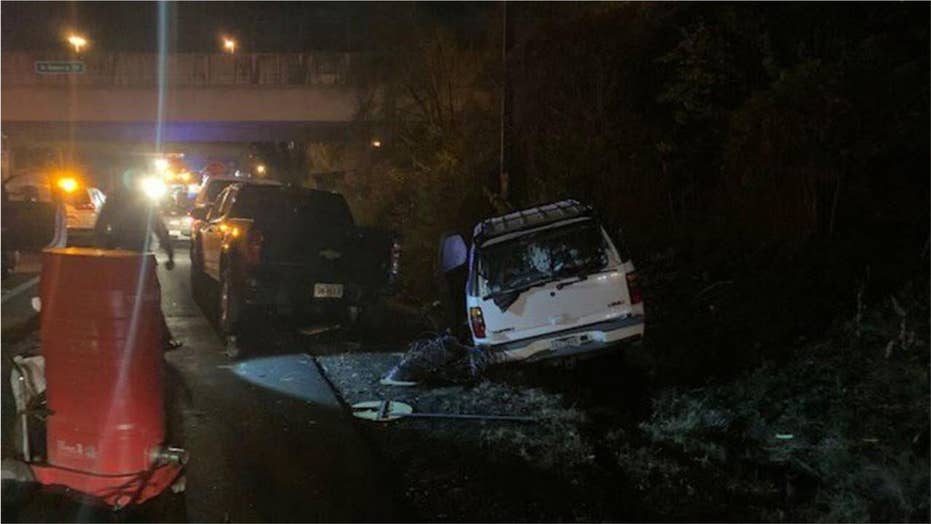 A suspected drunk driver in Virginia hits an 'entire crew' of road workers. Some of the workers are now in critical condition but all are expected to survive.

An entire crew of road workers was injured – some critically – after a suspected drunk driver struck the group on an interstate in northern Virginia early Thursday morning.

The accident happened on the westbound lanes of Interstate 66 around 12:20 a.m. just past the Lee Highway exit in Arlington County, according to the Arlington Fire Department.

"An entire crew of road workers struck by a vehicle on 66WB," the rescue agency said.

The Virginia State Police told FOX5 a GMC Yukon struck a total of six construction workers on the interstate.

A entire road crew was injured after they were struck by a suspected drunk driver on Interstate 66 in Virginia early Thursday. (Arlington County, Virginia Fire Department)

Three people were riding in the SUV, two of whom tried to flee the scene before they were taken into custody, according to state police.

Arlington Fire said that an EMS task force of units from Arlington County and Fire and Fairfax County Fire and Rescue Department transported eight people to area trauma centers, including some with "critical injuries."

Eight people, injuring the six road workers and two people in the SUV, were transported to area hospitals. (Virginia Department of Transportation)

None of the injuries, however, appear to be life-threatening.

Officials told FOX5 the driver of the GMC has been arrested for DUI, and the crash remains under investigation. The roadway was closed for several hours as a result of the crash, but as since reopened for the morning rush hour.

The Virginia Department of Transportation’s NoVa District commented on the incident on Twitter with a simple message: stop driving drunk.

"We’re just not in the mood to post something cute," the agency said.

"This AM, a SUV crashed into our contractor’s work zone on I-66, sending 6 people to the hospital," VDOT continued. "So stop driving drunk, into work zones, hitting people, then trying to flee."