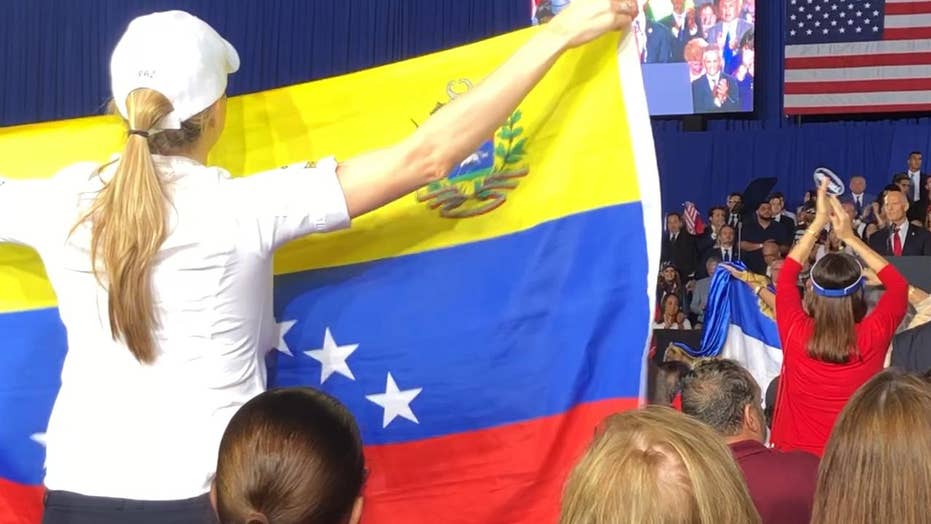 MIAMI –– When Vice President Pence visited here recently, he didn’t go straight to Little Havana for cafecito at Versailles, a traditional stop for politicians. Instead, he visited a church in Doral, a suburban community home to one of the city's fastest-growing immigrant groups.

As Venezuelans have fled their country in staggering numbers, many have resettled in South Florida, becoming a growing cultural and political force in an area that for years has largely been dominated by Cubans.

Miami now has the largest Venezuelan ex-pat community in the United States, and they have altered the landscape in a city that already has a melting pot of immigrants. That dynamic is reshaping Miami politics and becoming a growing influence in both Washington and Caracas.

“The South Florida Venezuelans are the politically influential portions of the population now. They are the ones that are going to be involved in regime change and rebuilding Venezuela,” Touchton said.

United Nations research shows that since 2014, an estimated 3 million people have fled Venezuela, which is about 10 percent of the country’s population. More than 200,000 Venezuelans live in Florida, according to a 2018 University of Miami study.

Since 2014, an estimated three million people have fled Venezuela

Doral, the heart of the Venezuelan community, is west of Miami and is bustling with Venezuelan culture. At one popular restaurant, El Arepaso, a large Venezuelan flag flutters on the roof. It’s just one of many businesses that many Venezuelan-Americans said makes them feel like they are home.

Florida Lt. Gov. Jeanette Nunez, who is Cuban-American, said the Venezuelan community has become a force in South Florida – and could one day hold as much sway politically in the region as Cubans do in Miami.

“While the Cuban population may be larger than the Venezuelan population, I think that is something that you will see, if the situation does not get addressed, we will continue to see more and more exiles here from Venezuela,” Nunez said.

Much like the Puerto Ricans in Orlando, Venezuelans are attracting the attention of both political parties and candidates hoping to court them. Republicans, particularly, have blamed the political crisis in Venezuela on socialism, using it as an example of what happens when a far left-leaning regime is in power.

Protesters hold up signs, demanding an end to dictatorship in their country (APTN)

The Trump administration has been vocal in condemning Venezuelan President Nicolás Maduro and urging him to step aside. Trump visited Miami last week and gave a rousing anti-socialism speech, saying what happened in Miami "will never happen to us."

“The days of socialism and communism are numbered,” Trump said. “Not only in Venezuela but in Nicaragua and in Cuba, as well.”

Democratic leaders and 2020 candidates recently began calling attention to the issue, with Sens. Kamala Harris and Bernie Sanders calling for free elections and humanitarian aid to be allowed in Venezuela. But some Venezuelans have questioned whether the criticism goes far enough.

In a state where major elections are often decided by a handful of votes, University of Miami political science professor Michael Touchton said Venezuelans in Miami could sway future elections.

It’s still unclear whether the Venezuelan crisis will draw the community to the Republican Party like the Cuban missile crisis prompted many Cubans to shift right.

Florida Republican Sen. Marco Rubio and top Senate Democrats are working together on legislation that would allow Venezuelans to stay in the U.S. with temporary protection from work permits and deportation. Rubio's Democratic colleague, New Jersey Sen. Bob Menendez, said in a statement, "providing temporary protected status for eligible individuals ... is the humanitarian and morally responsible thing to do."

Venezuelan holds up sign at Trump's speech in Miami: "Tonight we renew our resolve that America will never be a socialist country." (Elina Shirazi/Fox News)

Pence on Monday went to Colombia to speak with leaders and rally the international community behind opposition leader Juan Guaidó. The vice president announced that the United States will provide an additional $56 million in aid to Venezuela.

"The struggle in Venezuela is between dictatorship and democracy," Pence said.

Blanco Luis, a Venezuelan immigrant living in Miami, said he’s keeping a close eye on what happens in his home country.

Blanco Luis with his son in Venezuela (Elina Shirazi/Fox News)

“I am really sad about the people over there. I have a lot of family over there, they don’t have any food. No jobs, no transportation, no medicine,” Luis said.

Stephany Melchor moved to Miami in 2016, leaving her family to pursue a future she could never have back home. “I decided to come here. I had the support of my two brothers and I started over,” she said.

Melchor says many Venezuelans are grateful the United States stepped up to intervene amid the political crisis.

“Coming from a person so powerful as the president of the United States,” Melchor said, “is actually a relief.”