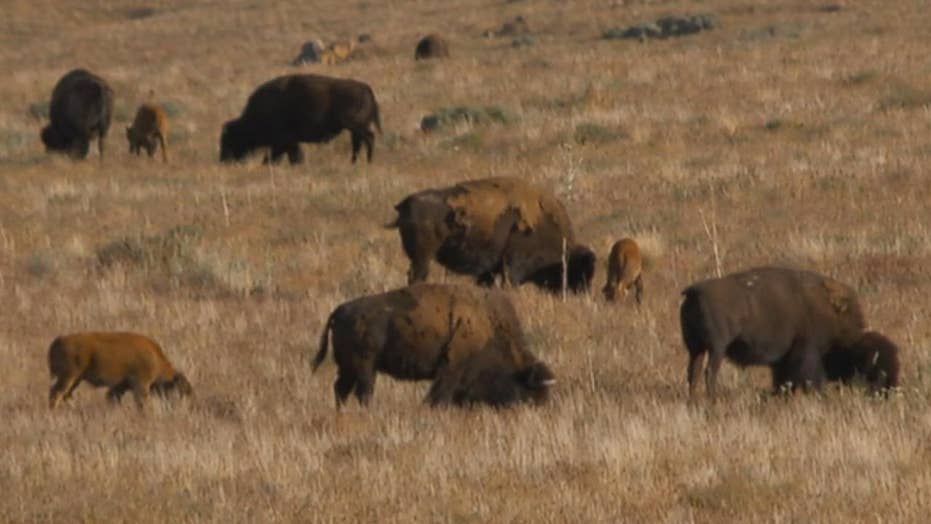 A Utah man was seriously injured over the weekend after he was gored and trampled by a bison while the man was out on a trail run at a state park, according to officials and family members.

Kyler Bourgeous, 30, was running along the Frary Peak Trail at Antelope Island State Park when he crested a blind hill and found himself feet away from a pair of bison.

“He said, 'I just turned and tried to run, and I could see I wasn’t going to make it,'” his mother Bonnie Bourgeous told FOX13.

In a 911 call released by the Davis County Sheriff's Office, a person can be heard saying a runner  "came around a corner and startled some bison and he got trampled."

On a GoFundMe page, the 30-year-old said he was gored in the hip and shoulder before being sent "flying into the air and down the hill."

A hiker was gored and trampled by a bison near Frary Peak on Antelope Island State Park in Utah on Saturday, officials said. (REUTERS/U.S. Forest Service)

"I was then kicked and trampled, cracking a rib and cutting my head in the process, before the bison moved away," he wrote. "I yelled for some nearby hikers to call 911 as I lay in a ball hoping the bison wouldn't attack again."

His mother told FOX13 her son hikes in the area frequently and planned for the possibility of an attack. She said her son's plan was to avoid a direct hit to the front or back and then curl into a ball to protect his vital organs.

“Boy, if those guys charge, you are pretty much defenseless,” Bourgeous told FOX13. “If he had not turned just one inch this way or that way, it would have gone through his heart and lungs and lower internal organs and there’s no way he would have survived."

Lt. Eric Stucki of Utah State Parks told FOX13 he was transported by medical helicopter directly to the University of Utah Hospital. Doctors told the 30-year-old he had injuries to his ribs and internal organs.

Trail runner in Cache County, Utah has a too-close-for-comfort encounter with a charging bison

Runner Michael McKnight encountered the massive animal along a trail in Antelope Island state park. The tense moments were caught on camera

"After being x-rayed and cat scanned, I was stitched up and received a tube in my chest to keep my lung from collapsing," he wrote on a GoFundMe page set up for his medical expenses. "I'm still hospitalized from my injuries where I'm doing my best to move, but remain mostly bedridden with drains coming out of my wounds"

A similar incident happened in March, when a man on a 23-mile run encountered a bison that gave chase.

The Bison, a mammal that usually lives between 12 to 20 years, is a herbivore and "near threatened," according to the World Wildlife Fund. The species, which survived the Ice Age, can run up to 40 miles per hour.

Antelope Island State Park warns online that bison "may be dangerous" and to avoid approaching them "for any reason."