Tucker: No one is above the law -- except Democrats

At 11:59 a.m. on January 20th, 2017, Donald Trump took the oath of office and became the president of the United States. By 12:05 that same day, Democrats were calling for his impeachment.

And that's barely an exaggeration, if at all.

Literally, for years, the left has been howling that Trump must be removed immediately from office, without the consent of voters. -- Every day!

Finally, on Tuesday, fewer than 11 months before the next presidential election, they explained precisely how they plan to do that as House Democrats described their articles of impeachment.

Jerry Nadler, D-N.Y., chairman of the House Judiciary Committee: The first article is for abuse of power. It is an impeachable offense for the president to exercise the powers of his public office to obtain an improper personal benefit.

That is exactly what President Trump did when he solicited and pressured Ukraine to interfere in our 2020 presidential election. This gives rise to this second article of impeachment for obstruction of Congress.

We must be clear: No one, not even the president, is above the law.

You got that?  "No one is above the law," explain the very same people who spent all day making excuses for illegitimate government spying on American citizens.

But never mind. Literally, no one is above the law. Democrats say that over and over and over again. Yeah, it's pretty simple. You don't need a law degree to understand it.

Nobody is above the law. Nobody -- except for the more than 20 million illegal aliens whom the left tell us have every right to be here, ignoring our laws. And shut up, racist, if you disagree.

Also, the so-called homeless shooting up and defecating and living full-time on our sidewalks. The law does not apply to them or to subway jumpers in New York or to Hunter Biden.

But other than that, absolutely nobody is above the law, meaning Trump. And that's why they're impeaching him.

What the left accuses you of doing is precisely what they're doing themselves.

They're extremely troubled it has come to this.

It is a sad day in Washington, a moment of poignant reflection, a moment redolent with sadness.

Reps. Nancy Pelosi and Jerry Nadler and Adam Schiff and a number of other people who've never had a single authentic impulse in their entire lives would like you to know that they feel extremely -- what's the word for this --  "solemn" about what's happening. Seriously solemn.

Nancy Pelosi, Speaker of the House: Good morning, everyone, on this solemn day, I recall that the first order of business for members of Congress is this solemn act to take an oath to protect and defend the Constitution of the United States.

Nadler: That is why we must take this solemn step today.

Rep. Adam Schiff, D-Calif., House Intelligence Committee chairman: The president's oath of office appears to mean very little to him. But the articles put forward today will give us a chance to show that we will defend the Constitution and that our oath means something to us.

Yeah. And if that wasn't entertaining enough -- and it was -- there was still more because this is Washington. There's always more. Dig your hand a little deeper into the stocking -- another present.

Tuesday's was Sen. Chuck Schumer, the professional Wall Street shill who lies for a living goes onto the Senate floor and accuses us -- this network -- and brace yourself here for a hot blast of irony --  accuses Fox News of being dishonest. For real.

Here in the Senate, certain members of the Grand Old Party are forming their own conspiracy caucus. Any crazy conspiracy whether the launched by Putin or some wild, wild-eyed, crazy conspiracy theorist who manages, of course, all the time to get on Fox News and have his story or her story repeated...

It's just such a shame that Sigmund Freud has fallen out of favor. They're attacking him on college campuses as a sexist. We need Sigmund Freud today because, without Freud, it's hard to recognize what's going on.

But here it is distilled to its essence. Write this down, put it on your fridge. It is the best guide to politics -- ever: What the left accuses you of doing is precisely what they're doing themselves.

They accuse you of fostering racism, pushing conspiracy theories, lying to the American people -- I can't finish the sentence. Of course, those are the three main things they're doing, and impeachment proves the point once more.

The first article of impeachment accuses the president of "abuse of power" for "soliciting the interference of a foreign government, Ukraine in the 2020 United States presidential election."

So, just so you understand -- House Democrats are arguing here that there was no meddling in American politics when a Ukrainian energy company hired the otherwise unemployable son -- of a sitting vice president -- at an exorbitant rate for no work.  At the very moment, his father was policing " anti-corruption" efforts in their country.

There's nothing political about that.  And if you think otherwise, you believe in a conspiracy theory -- a debunked conspiracy theory. A theory so debunked, in fact, that the president committed a literally impeachable offense simply by asking about it. That's right.

And you know what else wasn't at all an abuse of power but really the opposite of an abuse of power? When the last president, President Obama, killed a U.S. citizen without a trial using drone strikes -- not an abuse of power. Are you kidding? That's another debunked conspiracy theory.

Or when he had the FBI investigate a rival presidential campaign based on an obviously fraudulent dossier of opposition research written by a foreigner using intel from the Russian government. That was not an abuse of power. What? You're crazy! What do you work for, Fox News or something? You freak!

Every day the Democrats continue to focus all of their energy -- and all of our attention here in the media -- on impeachment, they're also sending a signal to voters that's pretty clear. It's we don't care what you think.

And while we're on the topic, by the way, the last several presidents, Bush, Obama -- and yes, if we're being honest, now Trump -- have all overseen the growth of a brand new surveillance state, one aimed at you and me, American citizens. That was not an abuse of power.

All those people have launched new wars abroad without bothering to ask Congress  -- in violation of the Constitution, the United States -- which requires them to do so explicitly. That's not an abuse of power.

With every passing year, the presidency becomes a lot more like a monarchy. Not an abuse of power. In fact, no big deal. But ask about Hunter Biden's sleazy deal with the Ukrainians? Whoa -- that's it, pal.  We're removing you from office.

Now the second article of impeachment, by the way, accuses the president of obstruction of Congress. The crime here, supposedly, is declining to comply with congressional subpoenas. Subpoenas, by the way, like the ones of the phone companies that got people's phone records last week -- you saw those -- but subpoenas related to the impeachment process.

Now, if you don't live in Washington, you may not know that neither party actually takes this seriously. Both parties know it's not a reason to impeach. President Clinton resisted subpoenas consistently, constantly, during his impeachment saga 21 years ago. Nobody remembers that. Nobody would care if they did remember it. So we will spare you any long explanation of it, but it happened.

Come on. None of this is about actual high crimes and misdemeanors; they're not even trying to make that case. Why is this happening?  You know why. Two reasons.

First: Democrats, at least their troops on Twitter, still haven't accepted the defeat of 2016. They think impeachment would nullify that shocking loss -- like it never happened -- and allow them to ignore every lesson that came with that election. The lessons that both our parties needed to learn but didn't and have no interest in learning.

They can continue to ignore those because Trump was impeached. He was an anomaly. Some weird orange guy showed up for a few years, but we kicked him out.  We don't need to think about why voters would've supported him in the first place.

But the other reason is looking to the future. Some Democrats -- and they're not all dumb, that's for sure -- sincerely believe that impeachment will help their case in the 2020 elections. It will unify their base. It'll demoralize the opposition the Republicans. It will humiliate the president. It'll improve their chances of winning the presidential election.

Are they right about that? We don't really know. But we do know that as of this week polling suggests maybe it's not that simple.

So, for example, every three months, Firehouse Strategies here in Washington has been polling voters in Wisconsin, Pennsylvania and Michigan. Those are, of course, the three critical swing states that made Trump president in 2016. In all the previous polls this year conducted by Firehouse, the president trailed Joe Biden in every one of those states. 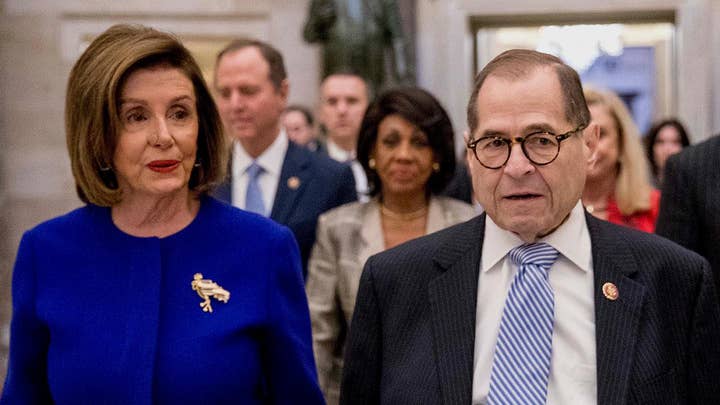 But in Firehouse's most recent poll, Trump is leading Biden and every other Democrat in all three states.

Now, the economy is obviously roaring along, according to some measurements anyway. That's clearly helping the president. But it does seem like at the very moment Trump is being impeached, his numbers should be going down -- and they're not. They're going up.

So, it's possible that instead of securing victory in 2020, these impeachment efforts could be leading the Democrats into a catastrophe.  And why wouldn't that be the case? Because when you strip away all the analysis, here's the bottom line: Polls show consistently that for most voters -- the ones who aren't on Twitter full-time -- impeaching the president is not even close to the top of their list of priorities.

They care about the things you'd expect them to care about -- the things that you care about, no matter what party you're registered with: health care; wages; student loan debt, which really is wrecking the country; crime, which is real and rising; the border, which is open. (It's not even a border anymore.) And just about every other issue that's not impeachment.

And that shouldn't surprise you because those issues actually affect people, even more -- brace yourselves, now -- even more than internal Ukrainian politics.

So, every day the Democrats continue to focus all of their energy -- and all of our attention here in the media -- on impeachment, they're also sending a signal to voters that's pretty clear. It's we don't care what you think. And that's not a winning message over time.