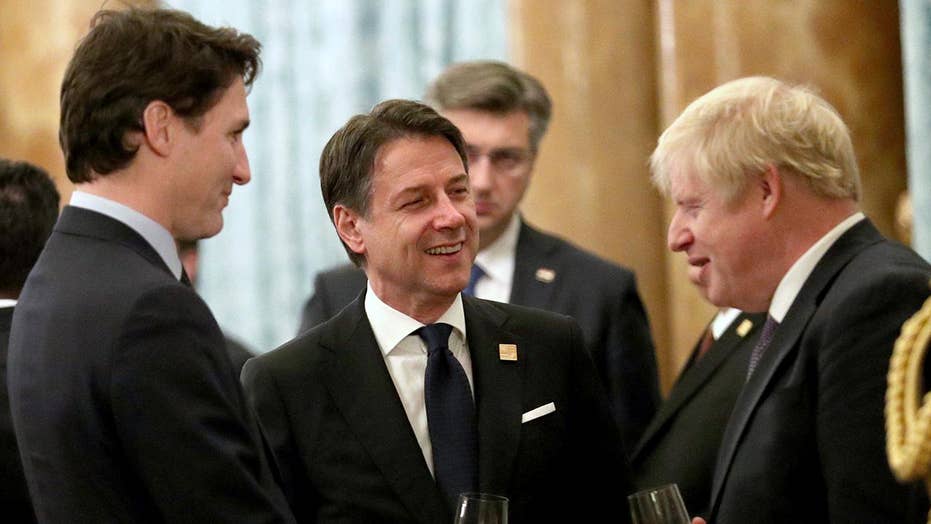 From mocking Trump behind his back to nations not paying their fair share, is NATO worth our time anymore?

Senior Director for the Center for the National Interest Harry Kazianis weighs in on the current state of the North Atlantic Treaty Organization.

Superpowers matter – especially when there is only one. So whenever there are big doings in the U.S., it ripples around the world. Fast.

Impeaching the U.S. president is definitely a big deal. So how will the ripples rising from this political drama affect the rest of the world?

The House impeachment hearings were in full frenzy while President Trump met with NATO leaders in London. Yet what happened in the hearing seemed to have a negligible effect on transatlantic relations.

KEN STARR: IT'S 'SCANDALOUS' TO PROCEED WITH IMPEACHMENT HEARINGS WHILE TRUMP IS ABROAD

Trump left the meeting early without a closing news conference. That seemed to put folk’s nose out of joint.

Trump might have skipped out ahead of schedule to avoid questions about a video apparently catching other NATO leaders making snarky comments about him at a palace reception. This all came off like an episode of “The Crown” – titillating but not substantive. The small-ball carping that did arise suggests there was no substantive criticism to be had.

Many had predicted a rancorous row between Trump and either French President Emmanuel Macron or Turkish President Recep Tayyip Erdogan. It didn’t happen. Trump left on civil terms with both. Meanwhile, relations with German Chancellor Angela Merkel seemed to visibly warm.

Trump didn’t go out of his way to chummy-up with British Prime Minister Boris Johnson, who is heading into a hotly contested election Thursday. Trump isn’t popular in Britain. Still, Johnson left no doubt that he plans on working closely with the U.S. president.

Trump did go out of his way to host a working lunch with the leaders of the eight other NATO countries that have fulfilled their financial obligations to the alliance’s defense. At that lunch, he was hailed like a conquering hero.

By the time Trump left London, NATO had agreed to focus on some of his top priorities, such as placing more emphasis on space and confronting China. Bottom line: nobody treated Trump like they didn’t expect to see him next year.

There is no question that North Korean leader Kim Jong Un is testing Trump again, trying to goad him into easing the pressure on communist nation. What’s not clear is that impeachment plays any role in Kim’s calculus.

Kim has been probing for chinks in Trump’s armor for two years now – long before impeachment was reality.

There is no question that the “dear leader” is looking grumpy and restless. He has threatened to call Trump names; announced the test of an engine for a long-range missile; and promised a Christmas surprise if the U.S. doesn’t start talking about lifting sanctions. What this adds up to is anybody’s guess.

Who knows what goes on in the Hermit Kingdom? However, the best guess remains that Kim will keep testing Trump until the 2020 election results are in and he knows whom he’ll be dealing with for the next four years.

Relations between Japan and South Korea are strained, and both nations are bickering with the U.S. over defense reimbursements.  Yet, there is no sign either Tokyo or Seoul is looking to wait Trump out.

Even after Trump signed legislation slapping Beijing over the troubles in Hong Kong, China seemed undeterred from pursuing a trade deal. If China’s leaders thought Trump’s days were numbered they would have either cut off the negotiations or pressed harder for more concessions. They did neither.

No regime in the world yearns to see Trump out of the Oval Office more than Iran. You’d expect the Iranians to exploit the impeachment hearings in a way calculated to embarrass, diminish or undermine Trump.

Maybe they will, but right now the mullahs seem so distracted by internal unrest, crippled by economic sanctions and straining to support their surrogates that they haven’t found the time to act up against the Great Orange Satan.

No Love From Russia

Russian President Putin doesn’t care who is in the White House. He is always looking for misjudgments made and gaps or openings left by rivals. If he sees an opportunity or a weakness, he’ll pounce –with or without an impeachment circus going on.

Putin is being cagey. He recently offered an extension of New START – a very bad arms control deal for the U.S. This week, he’s in France for peace negotiations with the Ukrainians. Keep a wary eye on this one.

Muddling in the Middle East

Trump’s initiative to build a collective security framework in the Middle East is still the topic of serious discussion. The other players wouldn’t be talking if they thought Trump was walking away from the region or wouldn’t be around awhile.

In short, there doesn’t seem much evidence that leaders in the rest of the world has put their dealings with the U.S. on hold, waiting for a world without Trump. The president is certainly not acting as though he has been weakened at home – nor is that how the world is treating him. At least, for now.