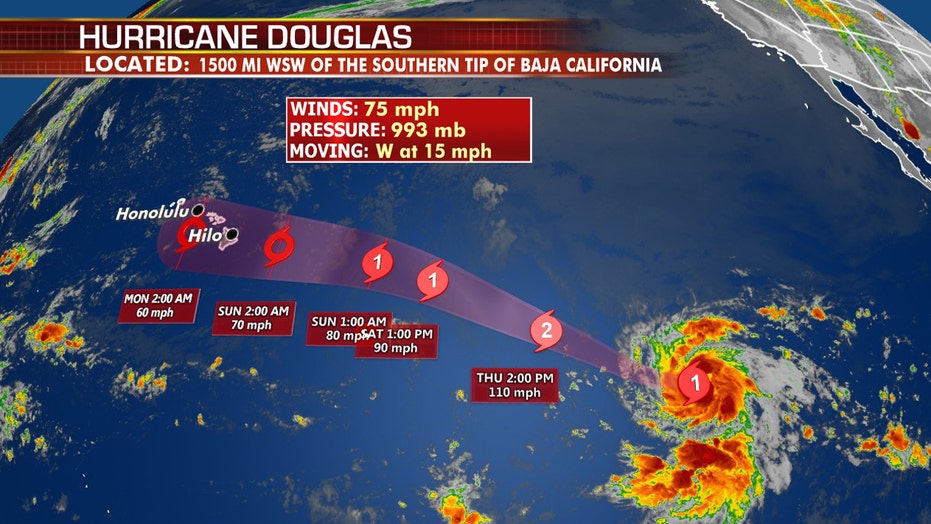 The fourth named storm of the Central Pacific hurricane season strengthened into a hurricane on Wednesday and may impact Hawaii by the weekend.

The U.S. National Hurricane Center (NHC) in Miami said that Hurricane Douglas is packing maximum sustained winds of 75 mph and is moving west at 14 mph.

The storm is about 1,785 miles east-southeast of Hilo, Hawaii, and is forecast to turn west-northwest and increase speed by late Wednesday.

The storm has been continuously strengthening as a tropical storm, with maximum sustained winds increasing Wednesday morning to 75 mph, with higher gusts.

"Additional strengthening is expected during the next day or two," the NHC said.

There are no coastal watches or warnings in effect, but the forecast cone from the hurricane center shows the storm could approach the Hawaiian islands by the second half of this weekend.

"There is an increasing chance that strong winds and heavy rainfall could affect portions of the state beginning on Sunday," the NHC said Wednesday morning. "Interests on the Hawaiian Islands should continue to monitor the progress of Douglas."

If Douglas does impact Hawaii over the next few days, it would be a weaker system.

"Some weakening could begin on Friday once Douglas begins to move over cooler waters," the NHC said in a Wednesday morning update.

With a possible approaching storm during the coronavirus pandemic, Honolulu Mayor Kirk Caldwell on Tuesday urged residents on Oahu to have preparedness kits for two weeks, the Honolulu Star-Advertiser reported.

“We need to be ready,” Caldwell said. “We’re in hurricane season and if we have to evacuate, we need to find shelter space sufficient to handle folks who are going to move into shelters, hopefully, with their COVID-19 kits of hand sanitizers and face coverings and everything else.”

Emergency officials said they have spent the past few months restructuring plans due to the pandemic, but there's concern over proper staffing as volunteers tend to be retirees.

Hurricane Douglas can be seen swirling in the Pacific early July 22. (NOAA/GOES-East)

Screening procedures at shelters, which may include hotels, would be similar to those at airports. They would include temperature checks, and questions about symptoms and recent travel history, according to KHON2.

“We’re making sure that there’s classrooms available if someone is symptomatic that we can isolate them from the rest of the shelter, according to shelter screening procedures,” Jennifer Walter, deputy director of the Honolulu Department of Emergency Management, said Tuesday.

Those who live in homes that have hurricane clips will be asked to shelter in place and take care of others.

“Make it available to your family members that can shelter in place with you because the more we can do ahead of time to people’s plans to stay at shelters, the less impact we’re gonna have in trying to scramble and open sites,” Walter added.

The storm in the Pacific comes as Tropical Storm Gonzalo formed in the Atlantic and is forecast to become a hurricane by Thursday.